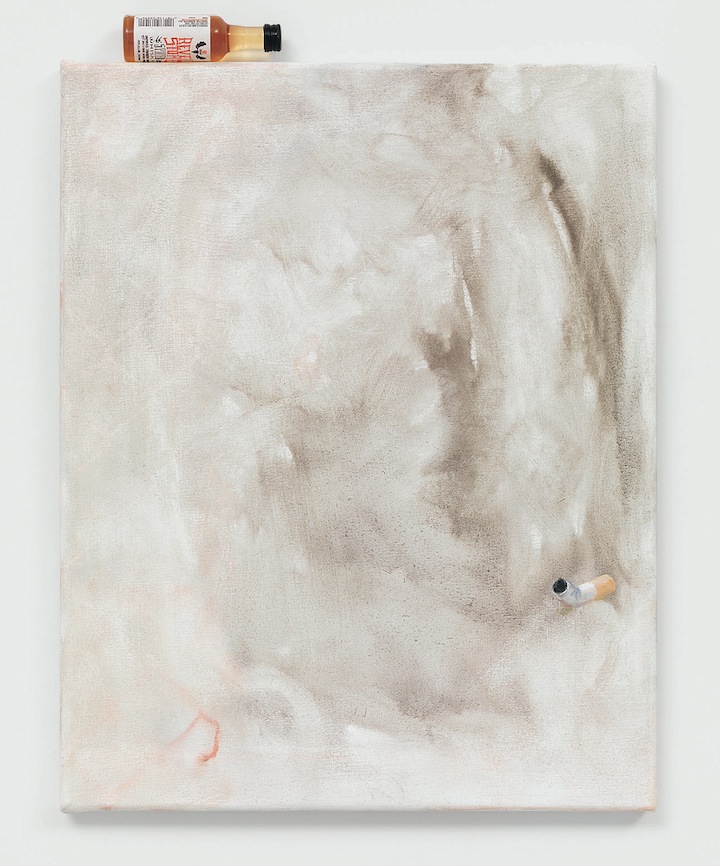 “I fight against my good taste,” once said Miuccia Prada. It’s not something you’d expect from someone whose name and fashion house is always associated with high-class taste. One section of the Met’s 2012 Prada retrospective was titled “Ugly Chic,” but when has Prada ever really ravaged our sense of decorum, or been truly disgusting and tasteless?

The German painter Monika Baer recently said something to me reminiscent of Prada’s take on taste. (Thirty of Baer’s paintings are currently on view in the Modern Wing.) “Some of my paintings are not to my taste,” said Baer. That is, she occasionally disobeys her better judgment or her inner critic (these are tough clichés to unpack anyway), and even pursues bad thoughts or behaviors in painting. (Don’t we all, just to see where they will go?) “I wouldn’t limit myself to what I like or what I don’t like,” Baer said. With this attitude, one must be ready for anything, even failure.

Baer’s painting called “Extended Failure” is a rescued “failed painting.” Baer says she failed making it three times, then brought it to a restorer to patch it up, then painted on top of that. It has scratches all over its surface like hesitation marks that have scarred over. The artist is proud to display her painting that refused to die, and the object itself, like a survivor, is left to tell its post-traumatic tale. Another work, titled “3 bad habits,” has a mini-size bottle of booze attached to it. A realistically painted cigarette is depicted on the canvas too. And, since I’m counting, the third “bad habit” of the artwork’s title is, I assume, painting itself. Baer corresponds the act of painting with drinking and smoking, such guilty but convincing pleasures. 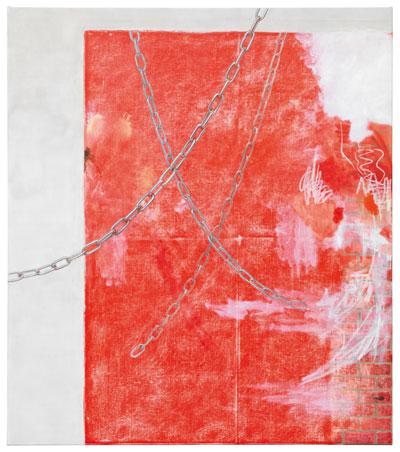 What passes under cover of “good taste” in the art world—multimillion-dollar auctions, attending Art Basel Miami Beach, the concept of art as a luxury brand—seems distasteful to many people who find art meaningful to their lives (even if at times we want to participate in that other art world). When “good taste” starts to sound like a niche market for elite shoppers, that’s when artists become suspicious and intentionally fuck up. Cultivating inverted taste is a valid maneuver. Destruction, wastefulness, failure, boredom and aggression are forms of creation, too. 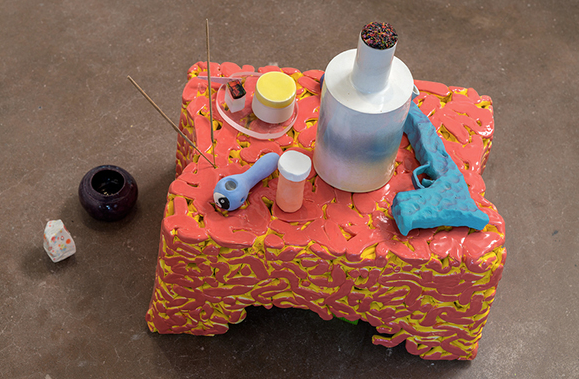 Dean Roper’s “Time Out” in “The Tyranny of Good Taste”

Less than a mile south of Baer’s exhibition is “The Tyranny of Good Taste,” at Columbia College’s Glass Curtain Gallery. Fifteen artists, forty-eight objects and mounds of materials comprise the visually stimulating exhibition. There are bad habits in this show, too, like glitter and irony and drugs and other materialistic excesses. Most, maybe all of the artworks are dense compressions of matter—congealed foam, resin, sequins, broken glass, bread, fabric, marbles, and on and on, but it’s not as offensive as you’d think it would be. The display could pass for a Field Museum mini-exhibit from the future: Artifacts from the Decadent Age. The sentiment is not so far from Lisa Wainwright’s 2008 exhibition “Ah…Decadence!” at SAIC, but Danny Orendorff’s curated mood in “The Tyranny of Good Taste” is more celebratory than polemical. His vision subverts the certain kind of trendy, homespun craft popularized by the Renegade Craft Fair brand. (Orendorff worked in the Chicago office for a couple years, and no doubt their vibe rubs off like cheap patchouli.) 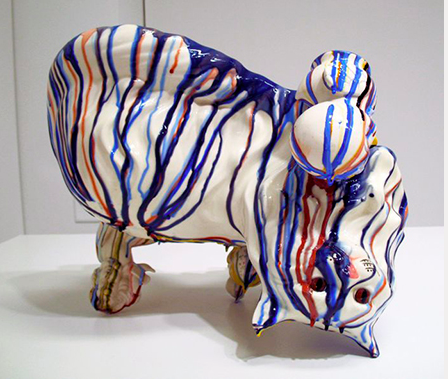 We’re getting past art being “so bad it’s good;” we’re peeking beyond “ugly is the new black.” Right now, pursuing bad taste means being rebellious and breaking rules. But the freedom to be excessive, as an act in itself, does not always, simply, equal liberty. (Bad-taste-as-critique should be more pointed than mere formalism.) Maybe bad taste is an acquired taste, like whiskey, cigarettes and abstract art, and good art need not have so many “good” qualities.