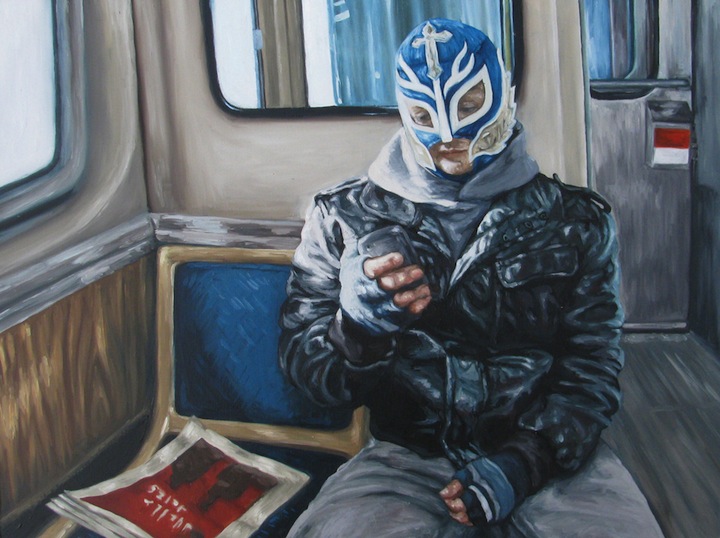 Life is boring. That’s why we need superheroes. They violently and delightfully disembowel the world of complexity and return it to an Edenic garden of unequivocal right and wrong.

The painter Gabriel Mejia’s hero, in his new exhibition “Journey into Whatever” at Bert Green Fine Art, craves this glory but is stunted by necessary, everyday activities. According to his artist statement, Mejia has created a “central deluded misfit who sees himself as masked protagonist whose banal routine mirrors my own.” This masked protagonist rides mass transit, does laundry and lingers in a workplace kitchen.

It’s this tension that hydroplanes across each of Mejia’s paintings and makes them not just humorous, but spot-on modern avatars of impotency. The action of inaction peacocks its way through mundanity sans shame.

Conceptually, Mejia bases his hero on elements derived from an amalgamation of eighty Facebook friends’ profiles who share his name. He is delving into the gap between people’s public and private lives, much in the same way tabloids enjoy breaking and entering into celebrity’s bulletproof facades to ground them in human frailty. 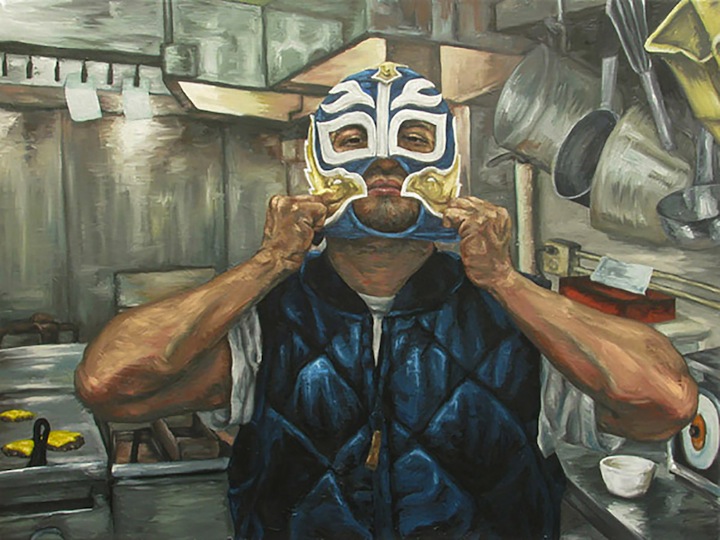 “Masked” and “banal” generally do not peacefully coexist in the same sentence. Nothing anyone does in a mask is banal. Mejia’s hero wears a blue Mexican wrestler’s mask with white trim around the eyes, golden wings swiping both sides from ear to mouth and a cross emblazoning the forehead. The significance of Mexican wrestler masks (which is profound in Mexico) will likely zip over Americans’ heads. Instead the question raised is: does the mask translate into the artist-assigned heroism, or is it simply a Halloween disguise? Either way, the charm of these works is in the hero’s desire to transcend his own feebleness and become a formidable rock star, unburdened with taking out the trash.

The problem with the series is the execution. The content is mighty but the form is gasping for air. Mejia’s faux hero lives in a world of hasty chalky-white and meaty red-orange brushstrokes. His been-there-done-that aesthetic showboats years of plein air practice blended with a palpable impatience. It’s like he was so eager to concretize his ideas that the intermittent labor to do so became boring. Perhaps photography or video, the go-to choices of artists journaling performative identity, would have served him better. 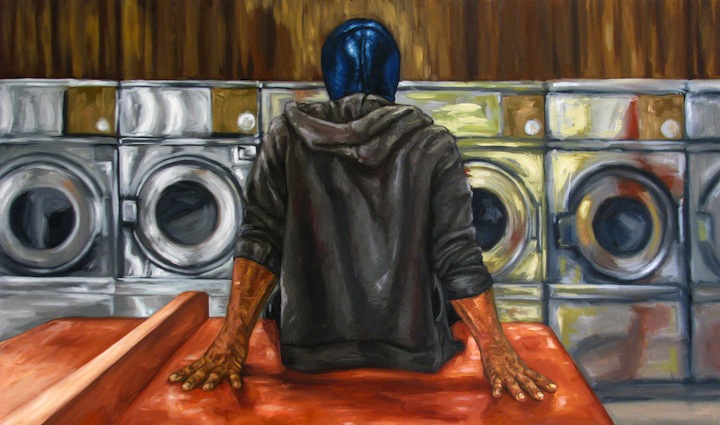 Despite the blizzard of speedy marks, there are a number of places where Mejia nails it. In one painting, lazy cheeseburgers simmer on a grill behind the hero’s right arm, invigorating the dull, restaurant-kitchen backdrop. In another work, laundromat dryers march across the canvas from graveyard white into a delectable patchwork of reds, greens and blues. And, within another, hoodie zipper-teeth machine-gun down the right-hand side of the canvas. These blessed grace notes add the kind of panache and verve the hero needs to support his bulk. The rest of the work cries out for similar tidbits.

The paintings ask good questions: Am I effective? Whose hero am I? By pulling on a wrestler mask, Mejia’s hero makes an astute statement about self-expectations. A little painterly self-deprecation goes a long way in assuaging adult disillusions and revitalizing a lost feeling of make believe. (Amy Zahi)