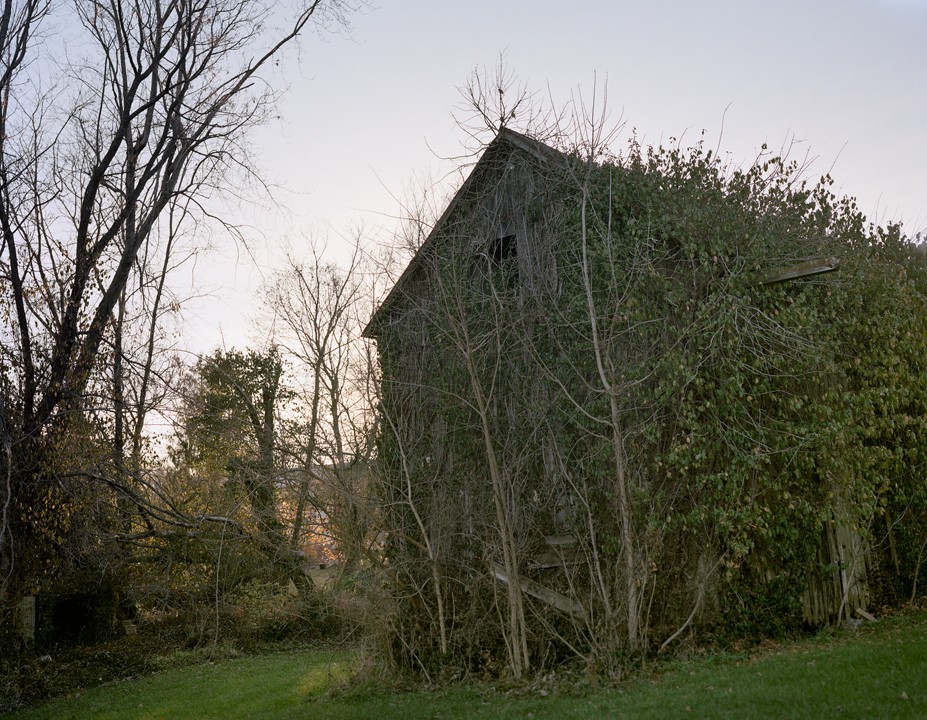 Utopian communities, which flourished in the United States during the nineteenth century and had a brief revival in the 1960s, aimed at creating a heaven on earth, or at least a more cooperative society than the one being put in place by competitive capitalism. Regina Mamou is fascinated by what has become of those nineteenth-century experiments, taking her camera to their surviving sites, which have been preserved from ruin and memorialized as minor tourist attractions, bringing back shadowy medium-format color photographs unified by an unrelieved somber sensibility. There is not a person to be seen in any of Mamou’s fourteen images; the sites signify a lost past, the vestiges of which have been saved, and are entirely enigmatic unless one knows the back story, to which Mamou gives scant clues in titles such as “Ascetic Living” and “Site (Community Vineyard).” We are purposefully made ignorant of the historical context of images that are purportedly reflections on an American past, leaving us to dwell on Mamou’s sensibility rather than her subjects. Her impressions are straight and clear, yet usually cast in a pall from being shot at night or twilight, or under gray skies or drenched in a fog (sometimes enveloping) during the daytime. Adding to the effect, the shots have been taken during the winter, when trees are denuded, plants are wilted, and the ground is dotted with patches of brown dirt and stubble. The overall effect is mildly chilling and a bit eerie, never uplifting. The feeling that Mamou evokes is the one that overcomes us when we are on the grounds of an old hospital, mental asylum, orphanage or cemetery on a dank day. If we needed to know that utopia is delusive, Mamou does her best to enforce that judgment, showing how high hopes have been brought to ground by the will to preserve a skeleton void of a heart. (Michael Weinstein)