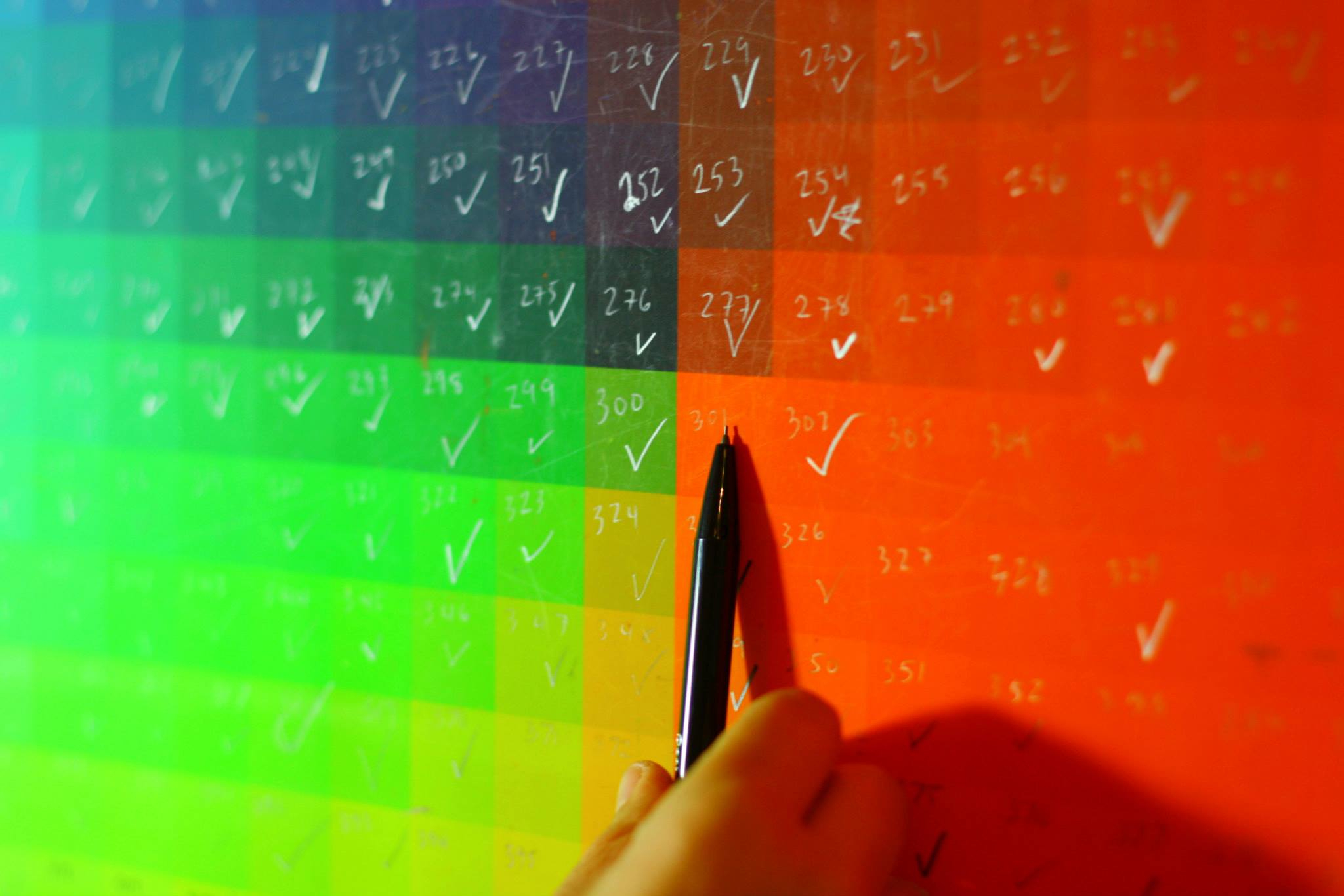 The sun hung low in the sky December 10, 1777, as German poet Johann Wolfgang von Goethe descended from the shroud of mist that enveloped the highest peak of the Harz mountain range. For a fleeting moment, he observed his shadow cast blue on the white snow. Isaac Newton had theorized shadows as the absence of light but Goethe perceived within the darkness a myriad of hues. Color was born in the space between darkness and light.

The new media exhibition, “Shift,” by the collaborative Luftwerk at the Chicago Cultural Center, extends an exploration into the phenomenology of color. During a residency at the Institute for Electronic Arts at Alfred University, artists Petra Bachmaier and Sean Gallero studied the science of light. “We immersed ourselves in research into the color theories of Johann Wolfgang von Goethe, Johannes Itten and Josef Albers,” Bachmaier says. The additive color system mixes primary colors red, green and blue to create cyan, magenta and yellow. “It is painting 101,” she laughs. 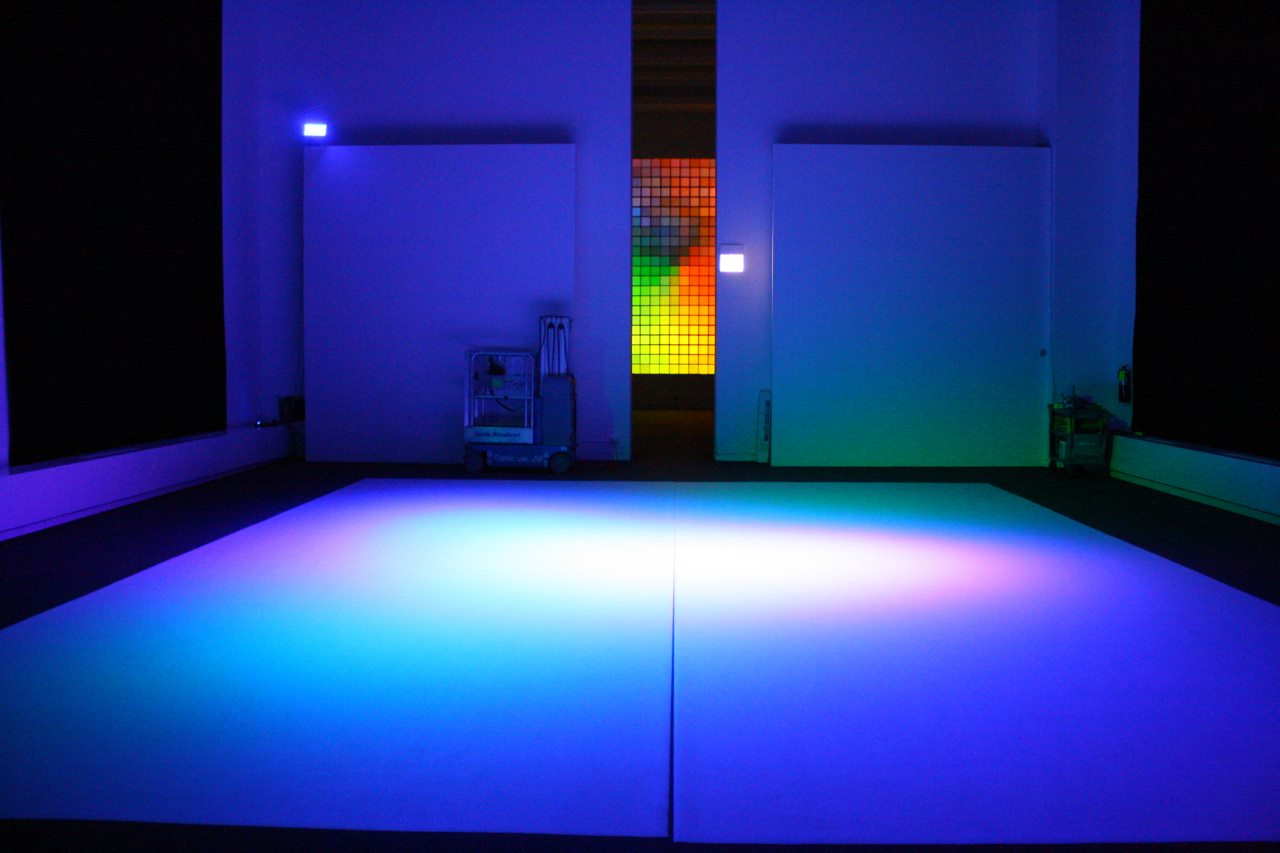 The darkness of the Cultural Center’s north galleries is illuminated by a monumental grid of pixelated color. Projected light animates the digitized color wheel of 529 painted panels. Subtle hues of red, orange, yellow, green, blue and violet dissolve into endless patterns. Viewers sit for hours in the twilight silence, mesmerized by the flickering light.

In 2012, the Chicago Office of Tourism and Culture commissioned Luftwerk to transform Cloud Gate into an interactive playground of vibrant colors, undulating lines and magnetic movement. Light from ten projectors refracted off the curves of the polished steel surface. “After ‘Luminous Field,’ we wanted to take a pause and reflect upon the foundation of our artistic practice,” explains Bachmaier. “Each gallery in the Chicago Cultural Center is devoted to an isolated element—light, movement and space.”

Bachmaier and Gallero met as students in the Performance Department at the School of the Art Institute of Chicago. Experimenting with reels of Super 8, they projected onto feathers, droplets of water and melting ice. In the past two years, Luftwerk exploded on the Chicago art scene with illuminations of modernist landmarks, such as Frank Lloyd Wright’s Robie House, in 2010, and Fallingwater, in 2011. 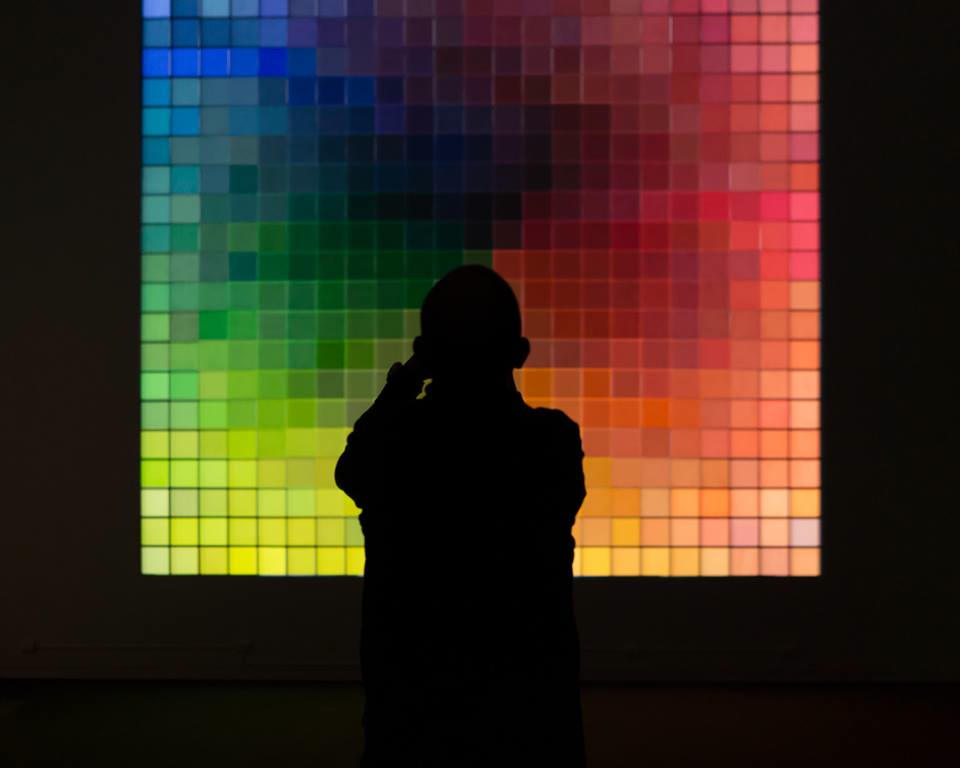 “For the longest time, we lived and worked in a small apartment in Humboldt Park,” explains Gallero. “Now we’ve dedicated a studio separate from our living space. It has surprisingly changed our work ethic.”

In the expansive industrial warehouse, Gallero studies the architectural blueprints of the Farnsworth House to construct a scaled model from foam core and balsa wood. Designed by Ludwig Mies van der Rohe, the modernist house of glass and steel is the site for an upcoming light projection. The continuous glass walls and structural I-beams will be illuminated by a video projection of the ebb and flow of the nearby Fox River.

Bachmaier drafts the precise technical installation plans. Distance, angle and size are carefully calculated. “The creative process never stops. We live and work together. One person has an idea, the other adds, until the idea becomes its own thing.” (Annette Elliot)