1. Cindy Tower, “Nest Egg,” at Good Citizen Gallery in St. Louis
What does class inequality and the financial meltdown look like through the eyes of the proverbial starving artist? Cindy Tower’s “Nest Egg” had the answer in a gargantuan visual diagram on how the rich have gotten richer. In Tower’s sculptural (and metaphorical) visualization, philanthropy is suspect in the tax-dodging structure that’s indirectly facilitated by art institutions.

“Outside In,” curated by Miguel ‘Kane One’ at NMMA

2. The National Museum of Mexican Art in Pilsen
From graffiti legend Chaz Bojórquez’s small but impressive retrospective of paintings, ephemera and merchandise, to “Outside In: The Mexican-American Street Art Movement in Chicago,” curated by Miguel ‘Kane One’ Aguilar, the NMMA is attracting what “white” museums in the city seem to lack: an ethnically diverse younger crowd.

3. “Read Between the Lines: Enrique Chagoya’s Codex Prints” at the Haggerty Museum at Marquette University, Milwaukee
Chagoya’s social critique took the form of accordion-folded artist books printed in the codex format, made of bark paper, and read from right to left based on ancient Aztec, Mayan and Mixtec precedents. The codex’s narrative exposed the banality of American pop culture and art historical paradigms that still create to this day a cultural normative lacking in ethnic diversity. 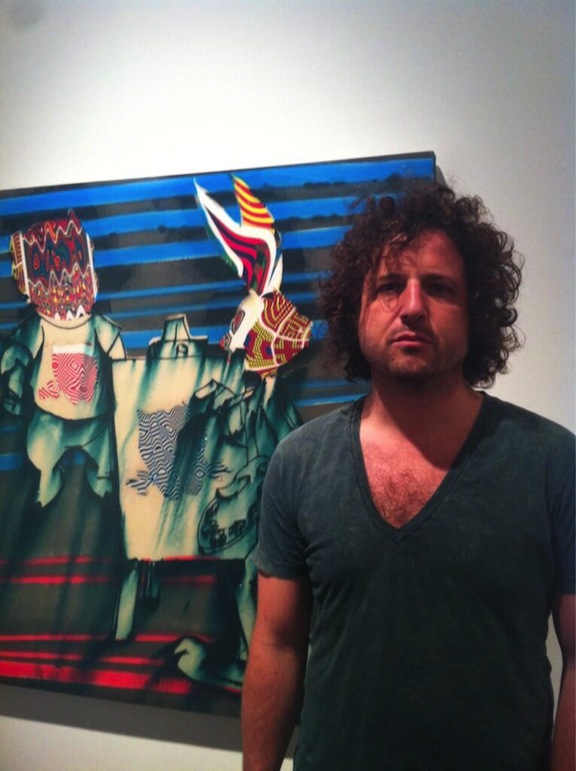 Painter Adam Scott with his work at the Elmhurst Art Museum

4. Painters Painting
It was a good year for painting in Chicago. From young talents like of Emre Kocagil’s strange surrealism at Peanut Gallery, to Adam Scott’s new body of work appropriating pop imagery and DIY poster-making techniques at the Elmhurst Art Museum, to Amanda Joseph’s examination of bodily textures and white trash culture in “CHEAP $KIN$” at ZG Gallery, and Josh Dihle’s incised paintings of miniature tropical landscapes encrusted with teeth and other strange fossils at Autumn Space. 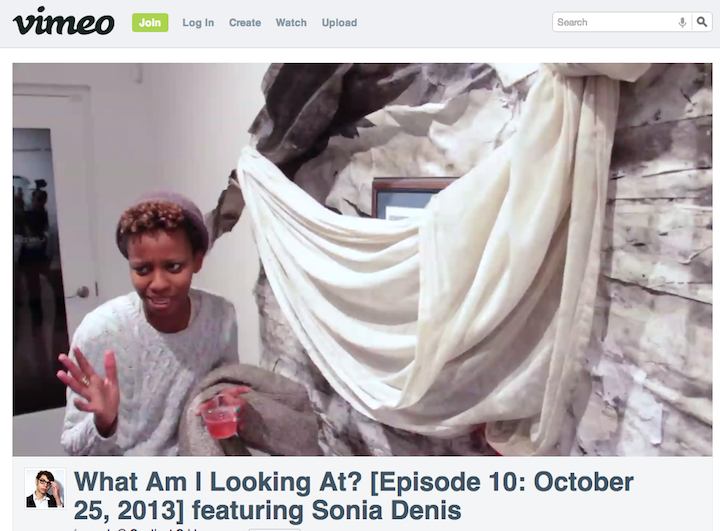 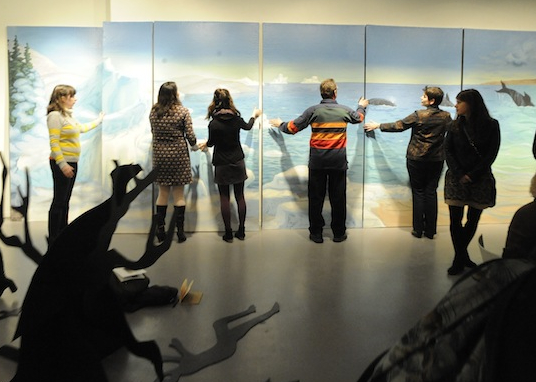 6. “Fearsome Fable –Tolerable Truth,” Tom Torluemke at the Hyde Park Art Center
This site-specific, immersive installation featured two 170-foot murals and several abstract wooden sculptures intended to raise pessimistic questions about current economic and ecological disasters. Torluemke’s mural was painted on double-sided boards, allowing viewers to physically turn them around at will, kind of like a puzzle. On one side was a beautiful and romantic city, while on the other side was that same landscape ravaged by an apocalyptic tragedy. 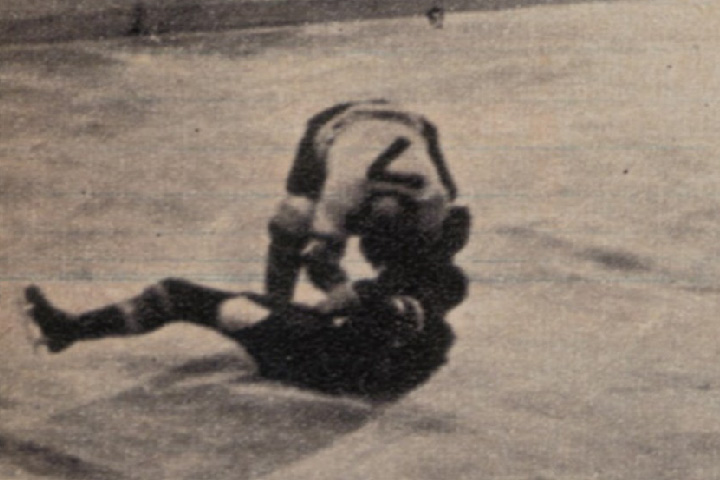 7. “Spectator Sports” at the Museum of Contemporary Photography
A show that captured the hysterical and somewhat sad nature of sports fanatics. The highlight was by Brett Kashmere’s “Valery’s Ankle,” a film work that parallels Canadian Hockey, the Cold War and national identity. 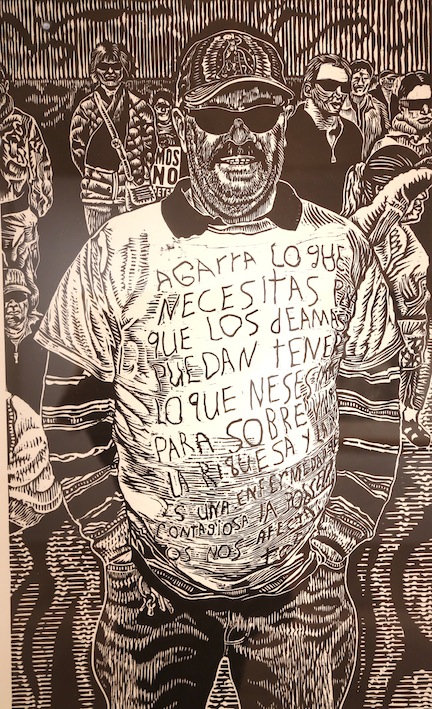 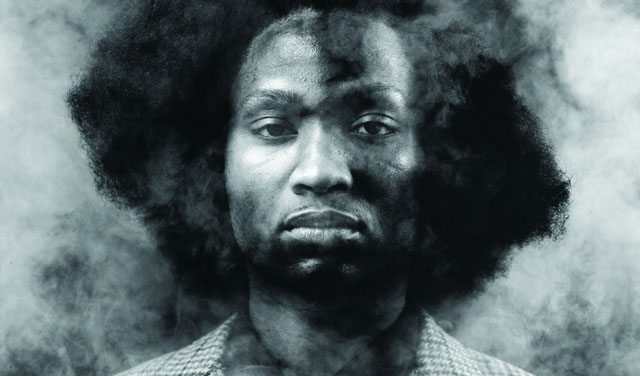 9. “30 Americans” at the Milwaukee Art Museum
Although this traveling exhibition has toured a great part of the US already, it was refreshingly radical to have it visit one of the most racially segregated art scenes in the country. 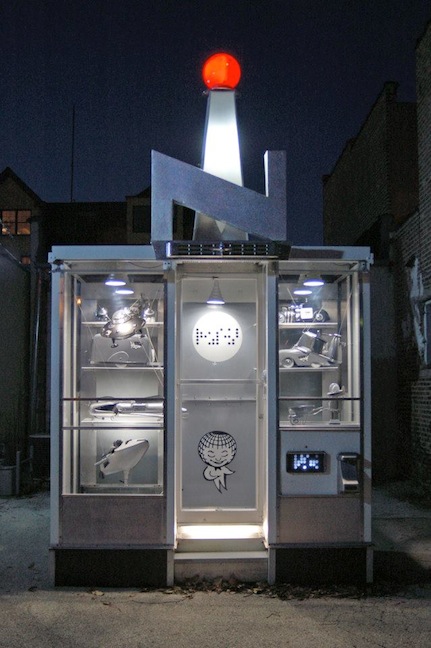 10. Randy Regier, “NuPenny’s Last Stand,” in Riverside
NuPenny is a sealed portable store of fantastic toys fabricated by the artist that are based on famous poems by the likes of Pablo Neruda. The sculptural entity also includes a cash register, signage, shelves, clock and more. The artist brought it here and parked it in some strip mall in Riverside. If you find it, you’re in for a treat.

Other standouts from 2013 include: Saul Aguirre’s simultaneous shows at two hip gastropubs in Pilsen (La Catrina Café and Pl-zeñ)—one was of drawings dealing with innocence and the other of paintings about the ego and rabid capitalism; Lucio Pozzi’s performative lecture on the problems of orthodoxy in art making and Justin Thomas Schaefer’s large site-specific installation of an umbilical cord’s journey into a grave at the Great Poor Farm Experiment V in rural Wisconsin; Charles Spurrier at AdventureLand; “Technoromanticism,” curated by Alfredo Salazar-Caro, at Jean Albano Gallery; and Michelle Harris’ constructions, ceramics and office interventions at D Gallery at Columbia College. 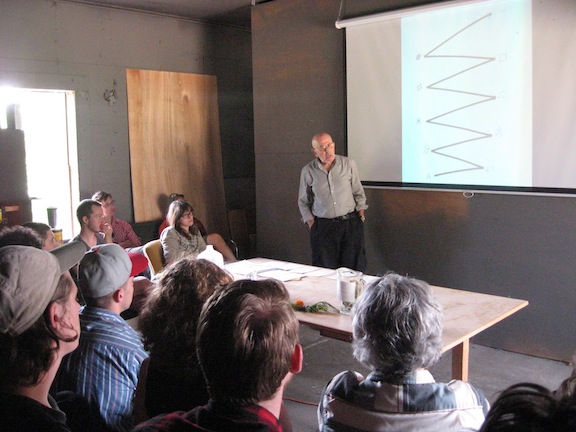 Also, exhibitions by Paul Lamantia and Mykola Zhuravel and the historical survey “Chicago’s Bauhaus Legacy” at the Ukrainian Institute of Modern Art; the pairing of eloquent formalists Chris Smith and Robert Burnier at Gallery 175; Jason House’s enigmatic photo abstractions at Gallery 19; and the academic examination of Franco-Russian painter and thinker Serge Charchoune, one of the least widely known figures in twentieth-century European art, at the Smart Museum.

And last but not least, the one show most Chicagoans sadly missed: Laure Prouvost’s small heroic paintings on cheap rugs at Courtney Blades right before she won the Turner Prize. Hopefully this will be the last time anyone misses a show at Courtney Blades.