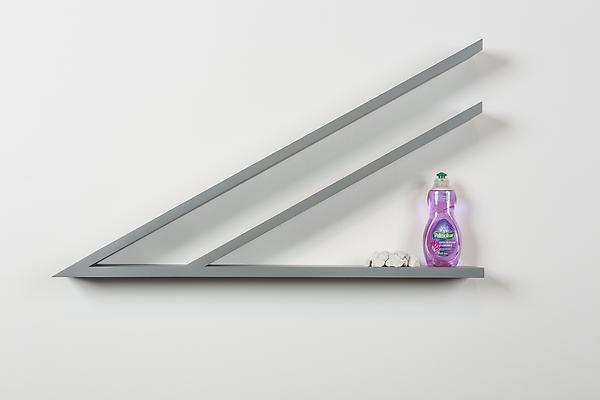 “Altostratus or Nimostratus. The Sun/Moon Can’t Be Seen,” 2013

The photographs and sculptures of Carson Fisk-Vittori unabashedly employ the design tactics of advertising and commercial art. Artworks that contain shampoo bottles, hair sprays and dishwashing soap almost come across as absurdist product endorsements rather than works of fine art. The products are usually integrated with incongruous objects such as a potted plant, or are found placed on minimalist sculptures that act as shelves. On a wall painted entirely green is a photograph of a cellphone being held up by a plant-shaped stand, giving the impression that the phone is some kind of perverse yet natural outgrowth. In a nearby work, an oyster-shaped soap dish is placed on top of an image of a garden plant, which in turn is resting on women’s razor blades. 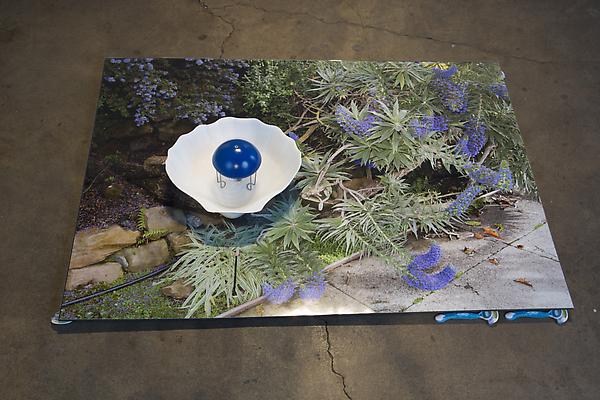 The purpose of these odd combinations is to blur the contrasts between the naturalness of the abundant plants in the show and the artificialness of the consumer products, many of which have artificial fruit and flower scents. The ease of placing one thing next to something else is a major strategy that has emerged with the rise of images in digital culture. There are a number of artists now, including Fisk-Vittori, who are very involved with the world of Internet art and find ways of taking their practice online. Similar to her use of ready-made objects, these artists tend to generate meaning through appropriation. Virtual galleries and magazines act as good platforms for displaying such art. Fisk-Vittori is frequently featured on websites such as Mossless Magazine and The Jogging; however, in a physical gallery space her objects demand more attention and allow for closer inspection. (Shreya Sethi)