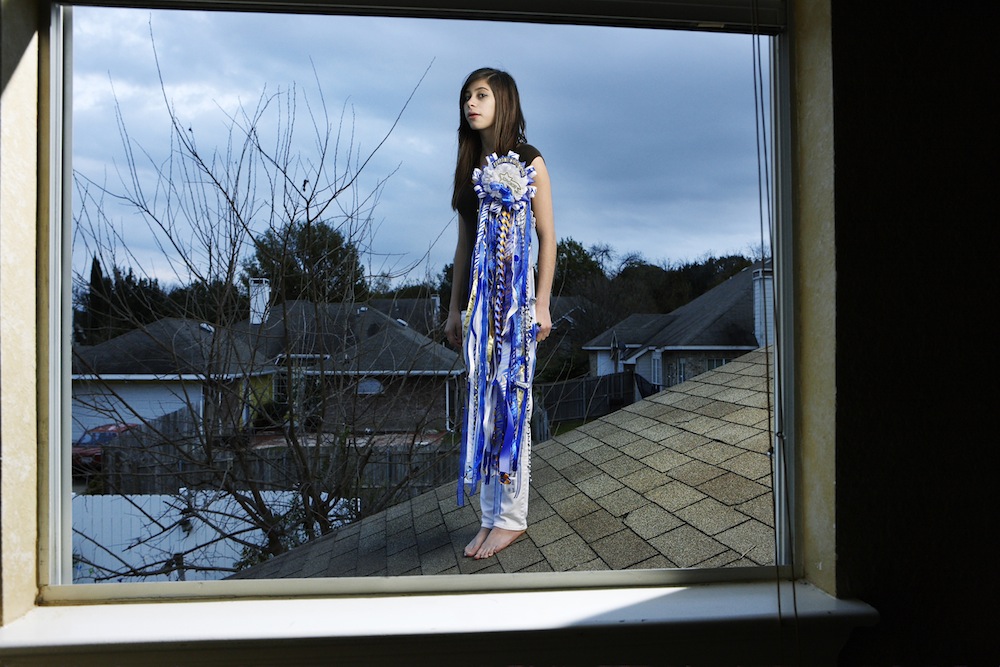 Straight out of the Lone Star State, hyper-postmodern Texas photographer Nancy Newberry turns her sophistication back on its kitschy roots, offering staged color scenario portraits of subjects enacting the ritual of wearing American-pop-baroque ornamented garb or crowded-collaged corsages dominated by mums for events like homecoming day. The enactment of Newberry’s concept could take myriad forms: a dignifying humanist treatment (impossible for her), the former with tongue in cheek, a sarcastic stereotyped put down, and so on. Newberry’s particular sensibility is centered in a gentle sense of the ridiculous that allows her to save her postmodern conscience and creds, and to stay on the nice side of the line between irony and mockery. A good example of Newberry’s brand of visual wit is her scenario of a young adolescent girl standing erect on a sloping shingled roof, barefooted and draped in her flowing, consuming corsage with its copious ribbons covering her; the expression on her face betrays some apprehension that has not yet become panic, a sense of unsteadiness that is quite understandable given her situation. With that image, Newberry alerts us that she has placed herself at the antipodes of the cultural documentary and the humanist portrait, opting for postmodern play with the cultural practice, emptied of reverence and nostalgia. Just to make sure we are in no doubt, Newberry uses lighting techniques from commercial photography, giving a slight feeling that we are not looking at the ordinary perceptual world, but a more graphic version of it, what has become known as the hyper-real. Nor, does it seem that Newberry has any polemical axes to grind or lessons to teach; she’s a member of the stop-making-sense-and-start-having-fun school. Newberry is another one of those girls who want to have fun—there is postmodernism in post-feminism, even shaggy dog stories spiked with the hyper-real. (Michael Weinstein)