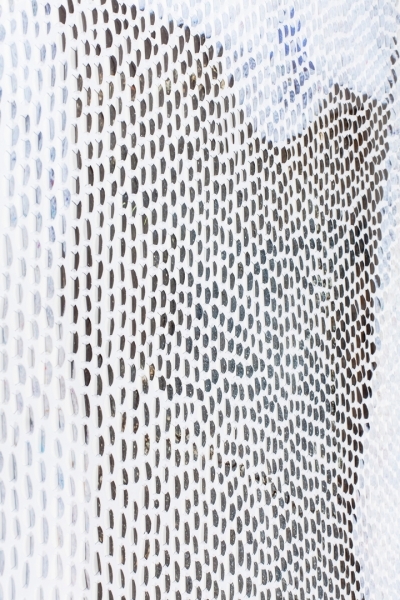 Curtis Mann’s latest exhibition is hung entirely backwards on the wall. That is, only the unprinted versos of his photographic prints face the viewer. All over these glossy white surfaces many semicircular slits have been sliced. Folded back, these slits reveal a fragmented view of the photo’s other side: scenes from the artist’s studio. The fluttery effect is that of peering through a textured window to glimpse a room’s interior.

The invention of photography more than two centuries ago caused art to undergo its most significant transformation, yet the medium itself is still susceptible to change. Mann continues to redefine photography, especially its material potential. The artist is previously known for his photographs of war in the Middle East that were featured in the 2010 Whitney Biennial. In these photographs he used physical processes of manipulation such as bleaching and dying to erase parts of the images and dramatize the violence.

In this new series, “A Matter of Structure and Utility,” the cutouts allow Mann’s photographs to enter the world of low-relief sculpture. The original image is largely abstracted and only from certain angles can one make out the outline of a book on a desk, or the folds of a blanket. Rather than sensationalizing its content, however, the scaly surface creates a gentle yet apparent barrier between the viewer and the image. A huge shift from Mann’s bold politically loaded images of destruction, these images indicate a kind of retreat and rethinking. Mann doesn’t wish to completely disclose the objects in his studio, and even titled one of his larger works “Failed Piece.” His other titles also show evidence of a degree of wariness, such as “Cardboard Piece,” “Wood Scrap” and “Other Piece.” In a sense one is given an insight into the unfinished and discarded elements of the artist’s practice. The entire project as a whole seems like a work in progress, and the viewer is kept at length, outside the textured windows of the artist’s studio. (Shreya Sethi)