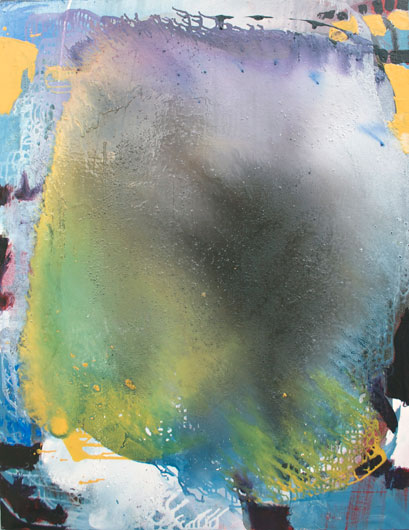 These are three image-makers who glory in destruction.

New York-based Jackie Saccoccio’s first show in Chicago includes her large and beautiful “portraits.” They’re not the kind of portraits that offer recognizable human facial expressions—but contemporary people are so complex; do facial features really matter much anyway? She’s put something like a big, empty, faceless, voluminous head smack in the middle of the canvas, and then wrapped it into a fantastic swirl of colors and textures. Saccoccio loves the infinitely spacious, visual sensuality of sixteenth-century European portraiture, but those are the only qualities she’s taken from it. These are portraits of unidentifiable but happily blown minds. 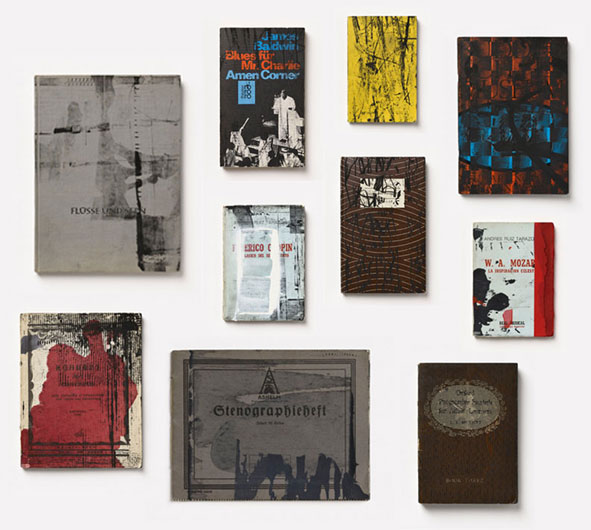 Arturo Herrera returns to the gallery with three cases of marked-up books. Some book covers look like they’ve been thrown beneath the traffic on a busy street. Some pages of text have become the support for very delicate and expressive ink brush painting. Some pages of photographs have been meticulously defaced by various kinds of black grids. Herrera’s visual intelligence is presumably greater than the literary value of the books, but maybe all this defacing just reminds us that in the digital age, the printed medium itself is becoming as obsolete and disposable as the eight-track tape. Best of all, unlike the vitrines of graphic material in most exhibitions, the books in each display case have been so carefully arranged, it feels like the case itself is the intended work of art (and that’s how the gallery sells it). These are beautiful cases of books—that no one is ever going to read. 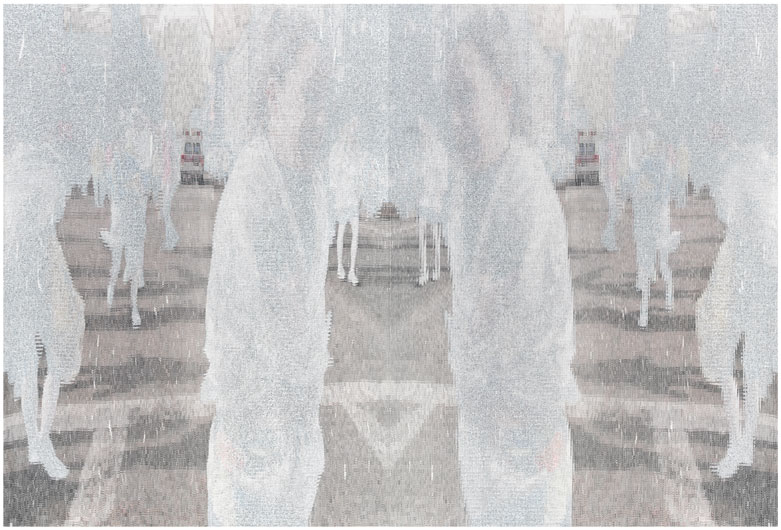 John Sparagana is the university professor in this group, raising academic issues of cognition and perception by offering images that are recognizably important while noticeably deconstructed and reassembled. He has cut and pasted printed journalism with knives or graphic editing software. But the subject matter is distant, either historically or geographically. Revolutions and civil wars happen in other parts of the world, while the famous Kennedy brothers are long dead and gone, so it’s appropriate that the figures feel ghost-like and washed out. But Sparagana has a feeling for monumental design, so the results resemble great fifteenth-century Italian frescos that have badly faded over time. The once profound message is now a dim, haunting memory.

Judging from these three bodies of work, one might conclude that there is no compelling meta-narrative impacting the sensitive artists and collectors of our time. Our heads are empty (Saccoccio), our books are disposable (Herrera) and important public events happen somewhere else (Sparagana). Just as in sixteenth-century Venice, history is slowly passing us by. But that doesn’t mean we don’t live in a great time for making art. (Chris Miller)

Through January 25 at Corbett vs. Dempsey, 1120 North Ashland.