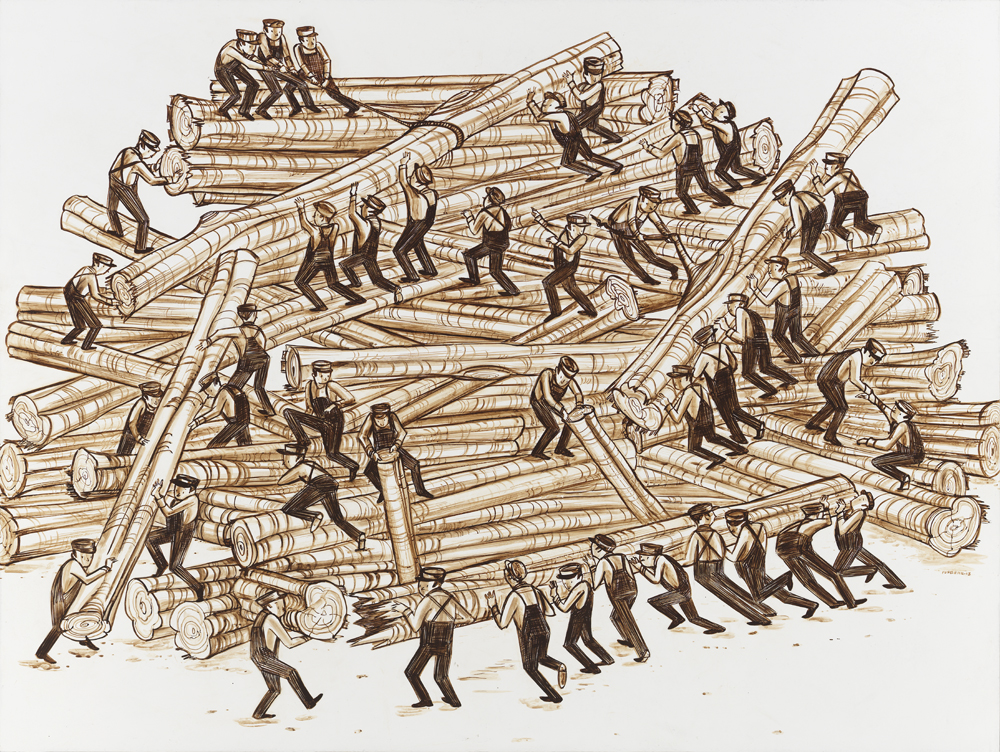 “We are alone in this together,” gouache, plaster and wax on panel, 2013

In Lora Fosberg’s fifth solo exhibition at the gallery, man is pitted against nature in a clear-cut, post-industrial landscape. Trees are falling, cities are burning and tornados are rampant in her paintings. All the while, Lilliputian-sized lumberjacks continue on with their tasks, grappling with massive piles of felled wood and attempting to push them downstream. Fosberg presents humanity’s tenuous engagement with the natural world in a darkly comical fashion—an illustrative, cartoon-like style—that amplifies the divide between the subject matter and its portrayal.

Fosberg’s aptly titled exhibition “The End of Absurdity” pairs low-relief plaster panels and line drawings with small-scale found object sculptures. In all of Fosberg’s works, she presents depictions of a potential future in a world that resembles something very close to ours. In “I’M SO SORRY FOR EVERYTHING,” a purple psychedelic cloud swirls around a burning building that is ironically topped with a water tower. From a distance, this piece (and Fosberg’s other relief panels) appears to be drawn freehand, but upon closer inspection it is revealed that the lines that comprise Fosberg’s compositions are first etched into the smooth plaster surface prior to being filled with color. The textural quality (and inherent aggression therein) of the incised concentric smoke circles mimic those patterns found in Fosberg’s illustrations of crosscut lumber along with the physical logs protruding into the gallery space. 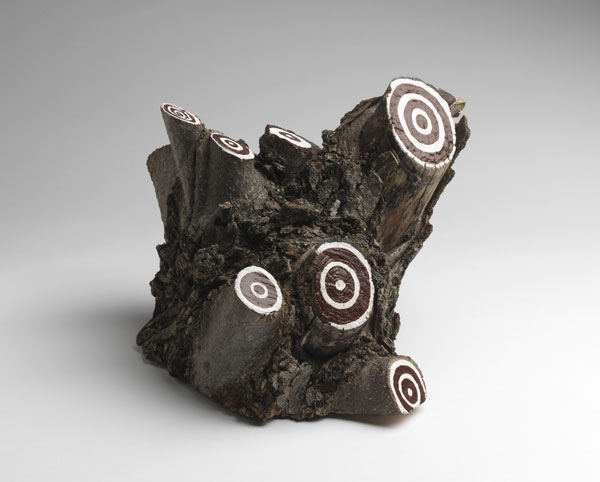 Fosberg’s sculptures fall somewhere between hermetically sealed time capsules and a hoarder’s stash. The minuscule pieces are seated on highly varnished shelves made of cut wood (bark still intact) that appear to be inset into the gallery walls, as if they grew into the space to provide perches for Fosberg’s tiny scenes. Atop these, dollhouse furniture is stacked haphazardly in tall heaps and capped by a glass clock-dome. The overall effect is that the items contained within are meant to survive the impending cataclysm and will be put to use once the world surfaces from the rubble. Fosberg’s work is replete with disaster and destruction but her biting wit allows her to explore “the end” in an aesthetically playful manner while still alluding to more serious implications. (Nicole White)