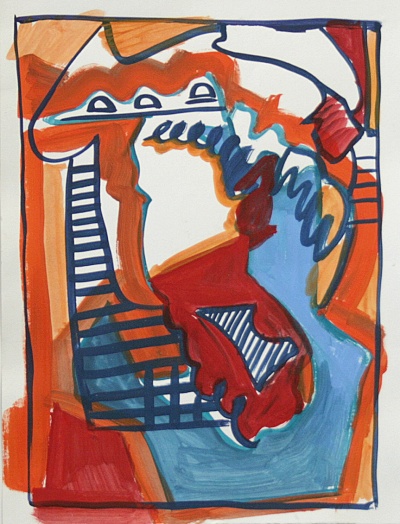 Chicago-based artist Sofia Leiby’s first solo show “The Drama of Leisure” at Devening Projects + Editions is a meditation on purpose and purposelessness. A 2011 graduate of SAIC, co-founder of Chicago Artist Writers and occasional contributor to Newcity’s art section, Leiby’s fourteen small-scale pictures manifest the challenges faced by a generation of young artists: how does one pursue a meaningful practice when so much of your day is given over to repetitive, albeit necessary, employment?

The acrylic and silkscreen works, rooted in a dichotomy that pits labor against leisure, lean heavily on the cubism of twentieth-century artist Juan Gris. Lightly colored, with a preponderance of blues and oranges, they’re fluid in line, and quick in gesture and arrangement. As present iterations of past incarnations, Leiby’s abstract forms have a genealogy that’s traceable throughout the exhibition. Shapes that might appear as disembodied limbs, stairways or interior walls pop-up frequently, results of a streamlined process that sees the artist painting from her paintings. 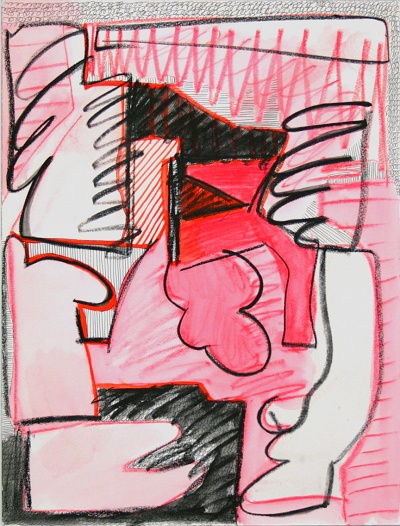 Presented, according to the artist’s statement, as products of her “free-time,” these airy compositions feel less like assertions of the soul’s liberation from constraints, and more like affirmations of work’s subjugation of the individual. Inscribed into their surfaces, the repeated motifs record a kind of desperation, an internal crusade to uncover meaning and value in an autonomous activity. While Leiby’s paintings are not particularly authoritative visual statements, they are important objects of self-recognition. Buoyant and clumsy, composed of the past and trying to make sense of the future, their frayed edges embody Leiby’s struggle for purpose and by extension, our own.

By slaying the old gods of talent, originality, quality and meaning, artists like Sherrie Levine probably thought they were doing us a favor. But as I survey the output of young twenty-first-century artists, painters in particular seem to be racked with anxiety over the very activity they’re passionate about. They’ve been conditioned by an older generation of cognoscenti to view their practice as self-indulgent, out of touch, powerless and no different than washing the dishes. For too many, it’s become a self-fulfilling prophecy. But I suspect artists like Sofia Leiby have turned against this indoctrination, and see value in their practice for its own sake and (hopefully) the sake of others. (Alan Pocaro)