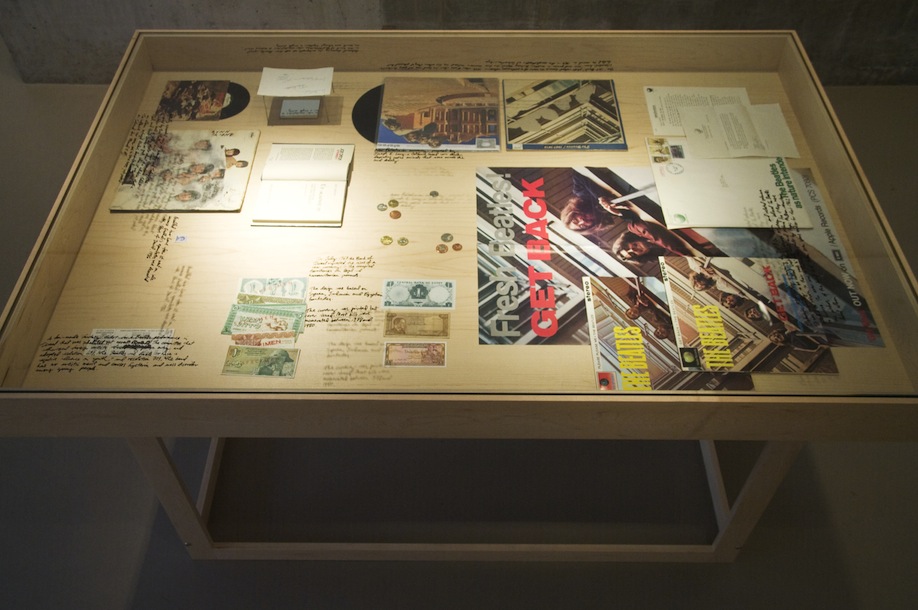 Equal parts Middle East history lesson and VH1 “Behind the Music” episode, there’s precious little to dislike about Iraqi-American conceptual artist Michael Rakowitz’s “The Breakup” at Rhona Hoffman Gallery. Through a full-on multimedia presentation encompassing audio, video, collage, memorabilia and a limited-edition vinyl pressing, Rakowitz autopsies the slow dissolution of the world’s most famous pop band, The Beatles, in conjunction with an examination of contemporaneous events that led to the significantly more ruinous dissolution of Pan-Arab nationalism.

Replete with items such as a Lebanese pressing of the “Hey Jude”/”Revolution” forty-five record, various images of Yasser Arafat, old newspapers, a rock from Palestine (a reference to the 1987 Intifada) and bootleg LPs from Rakowitz’s personal collection, the sheer volume of objects and information takes time to adequately digest. And while these articles—and the associations Rakowitz draws among them—are of great interest, the cornerstones of the exhibition are undoubtedly the artist’s original radio broadcasts and film, both titled “The Breakup.” 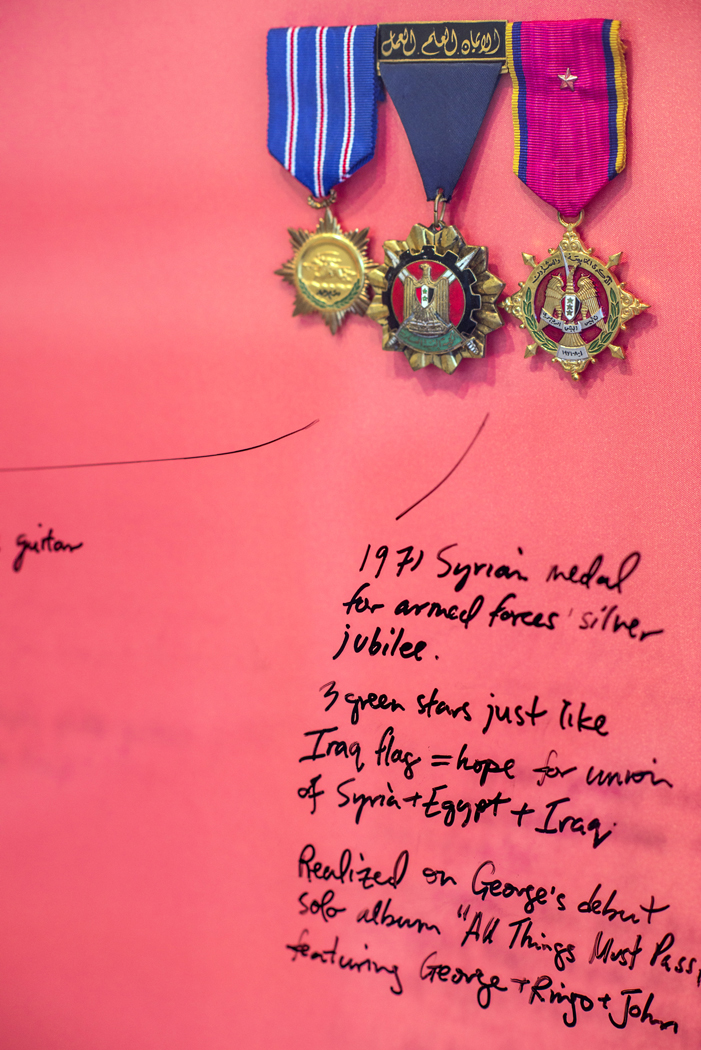 Aired in 2010 as a ten-part series on Radio Amwaj, 91.5 in Ramallah, Rakowitz draws upon rare and unreleased cuts from The Beatles home demos to the ill-fated “Get Back” sessions to weave tales that span the public—Syria’s withdrawal from the United Arab Republic, and the origins of its national anthem—to the private—admitting that had he known The Beatles covered “Hava Nagila,” he would have preferred a DJ to play that song at his bar mitzvah rather than a band. The film functions in much the same way, juxtaposing time and space, the Six Day War with the video for “Strawberry Fields Forever,” along with footage of the roots-band Sabreen recreating a mesmerizing, Arab-tinged version of The Beatles’ famous rooftop concert in the clear Jerusalem night sky.

The only moment that strains credibility in this otherwise excellent experience is the artist’s insistence on personifying nations of the Middle East in the form of The Beatles themselves. To equate John Lennon with Egypt, Ringo with Jordan, George with Iraq and Paul with Israel based on character traits displayed within panels inlaid with satin reminiscent of the Sgt. Pepper’s uniforms is a cute formal trick, but feels a little forced. In truth, the breakup of The Beatles is a tenuous analogy for regional turmoil caused by centuries of conflict, a legacy of colonialism and a deepening cold war looming ominously in the background. What “The Breakup” succeeds brilliantly at demonstrating, however, is that the 1960s were, in the words of Francis Fukuyama, the beginning of “the great disruption” across the globe, and that no matter when or where you’ve lived, The Beatles have been a persistent soundtrack to it all. (Alan Pocaro)

Through February 22 at Rhona Hoffman Gallery, 118 North Peoria. The gallery hosts a record-release party on February 14, and a conversation with the artist on February 15.