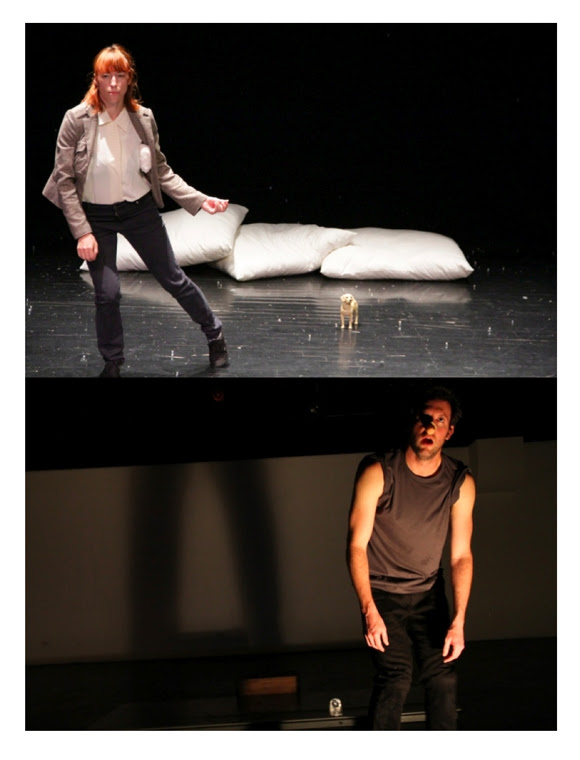 You had to be there. As if the avant-garde wasn’t exclusive enough, its bygone golden days are merely hearsay in someone else’s scrapbook. That’s frustrating, especially when trying to grasp the mood and attitude of an influential but shuttered underground art space that teemed with cutting-edge, one-night-only performance art. I’m describing, of course, Chicago’s Randolph Street Gallery (RSG) in the eighties and nineties. Perhaps today’s equivalent of RSG is Wicker Park’s performance art space Defibrillator, but back in RSG’s heyday, performance art responded to women’s rights, gay rights and AIDS before those issues solidified into styles. “At the time, it galvanized a community,” says Matthew Ghoulish, who participated in some of RSG’s seminal events.

But now, thanks to Ghoulish and longtime collaborator Lin Hixson, ephemeral art need not be so intangible. Their performance group, Every house has a door, is reviving nine pieces originally performed at Randolph Street Gallery. Revivals tend to focus on iconic and crowd-pleasing artworks, but Ghoulish and Hixson have selected pieces from artists who were emerging at the time, in the late-eighties and early-nineties. Compared with Marina Abramovic’s reenactment of seven performance-art classics (staged at New York’s Guggenheim Museum in 2005), the Every house has a door program decidedly contains under-known gems from the RSG archive. “We’re presenting something that slipped through the historical cracks,” says Ghoulish.

So, what was the Randolph Street Gallery really like? “They showed very challenging work,” says Ghoulish. “It was queer and radical, activist and politicized, but not lobbying,” he says. The gallery, which also hosted visual art exhibits, films and music, opened in 1979 on Randolph at Peoria in the West Loop, where Perez Restaurant currently stands. In 1986 the gallery relocated to a larger space at Milwaukee Avenue with the help of Lewis Manilow, then Chicago’s guardian angel of art. The gallery remained there (in a space currently occupied by Intuit: The Center for Intuitive and Outsider Art) until 1998, when the National Endowment for the Arts turned off funding for provocative, non-profit art spaces like the RSG.

“It’s about that room and what happened there,” says Hixson. “We’ve seen a lot of these first hand. We were in the room.” The nine recreated performances, though, won’t be exact replicas of their originals. For starters, the show—which is titled “9 beginnings: Chicago”—features only the first few minutes of each performance. It’s like a sampler platter of RSG performance art, and keeps with the strategy that Ghoulish and Hixson adopted for “9 beginnings: Bristol,” which they directed in 2012, featuring reenactments from The Live Art Archives, in the U.K. RSG’s archive is housed at SAIC, and while many of the performances were recorded (and can be viewed by appointment), the VHS quality is often lacking. In fact, some of those tapes have terrible tracking problems, and it’s hard to see past that dusty, muffled recording medium. While Ghoulish and Hixson used those tapes to guide their own interpretations, the reenactments, performed in real time by live actors, should feel fresh, even urgent.

In fact, the work is still quite riveting. I attended a rehearsal last October to get a sneak peek at the program as well as Ghoulish and Hixson’s method for interpreting the work. Wearing a blue cummerbund, but shirtless, and doing a convulsive dance to some primitive techno, dancer Sebastian Calderon Bentin re-performed the1988 work “The Shrimps” with vivacity. Later, he donned a fake nose and became Chris Sullivan (yes, that Chris Sullivan) from his 1989 piece called “Cavalcades in Learning.” It was a difficult character to embody because Sullivan was playacting as a happy artist trying to be a serious, suffering performance artist, all the while having a fit of stage fright. A review in the Chicago Reader at the time called Sullivan’s character “an impostor of himself,” so now the new actor had to imitate an impostor of an impostor of an impostor.

Exact mimesis of the original performance is impossible, and even beside the point. “If something feels precious, I’m wary of it,” said Hixson during the rehearsal to her performers. Later, Ghoulish confided, “We put our stamp on the material. You can’t recreate the whole thing accurately. Lin wants you to forget it’s anything but a contemporary piece of performance.”

“We want to show younger people what it was like; to remind us if it’s missing,” says Ghoulish. “9 beginnings: Chicago” is certainly not a history lesson, even if it does seem like history repeats itself in the performance art world. As a medium, performance art is perhaps the most non-commercial, even anti-profit art form. This reality comes rushing up in a piece that Ghoulish performs during the show’s intermission. It is a re-reading of a pre-show announcement at RSG by then-program director Mary Jo Schnell. “We are in need of your support,” he says. “Government funding for the arts is going through some terrible reconfigurations… to put it lightly.” Shortly thereafter, Randolph Street Gallery would close forever—or, at least, one version of it.

“9 beginnings: Chicago” shows January 23-25 at the Gray Center for Arts and Inquiry, University of Chicago, 929 East 60th. Free with RSVP.

Every house has a door