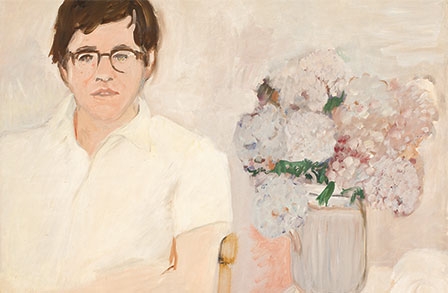 Jane Freilicher is a poet’s painter or at least that’s how her poet friends from the 1950s have characterized her. As the current exhibit at the Poetry Foundation demonstrates, Freilicher returned the favor, rendering portraits of each of them, beginning with a full-figure oil portrait of Frank O’Hara. The year was 1951. Freilicher was twenty seven, O’Hara was twenty five, and avant-garde poetry, jazz and painting were erupting all over the Lower East Side of postwar New York. Frank wrote Jane a letter about an essay that was “really lucid about what’s bothering us both besides sex.” It was Paul Goodman’s manifesto that summer in the Kenyon Review, touting the “advance-guard artist” who is “especially concerned with dissolving the introjected (imperfect, unsatisfactory) society.” That letter, as well as other correspondence and collaborations with poet friends, is now also on display at the Poetry Foundation.

The rough, assertive qualities of that O’Hara portrait was the closest that Freilicher would ever come to the heroic wave of Abstract Expressionism that was then cresting. As she later wrote, “To strain after innovation, to worry about being ‘on the cutting edge’—a phrase I hate—reflects concern for a place in history or for one’s career rather than for the authenticity of one’s own painting.” She would stubbornly pursue her own quiet “tentativeness” (as the poet and art critic John Ashbery once put it), just as she would soon marry a businessman, move out of bohemia, build a house overlooking the ocean near the Hamptons, raise a child and pursue a more conventional upper middle class lifestyle.

The elegance but also the isolation of that life emerges in the small retrospective that is showing concurrently at Valerie Carberry Gallery. Over the decades, you can feel Freilicher move from excitement (“Flowers in Armchair,” 1956) to triumph (“Still Life with Yellow Flowers,” 1968) to refinement (“The Teardrop Vase,” 2005) as she ages and hones her domestic ideals with still-lifes and landscapes. It’s a very ordinary world, but it’s been keenly and freshly felt with the optical and expressive qualities that Hans Hoffman encouraged his students to discover. 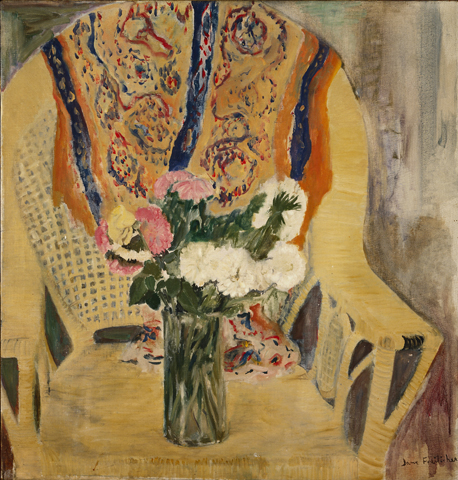 Freilicher’s work may lack the breath-taking virtuosity of her hero, Pierre Bonnard, but as her friend, the art critic and Pulitzer Prize poet James Schuyler once wrote, “She is a natural: properties of the real world and of the imagined are casually linked in an intensity of color and of relaxed stroke.” (Chris Miller)

Through February 21 at the Poetry Foundation, 61 West Superior; and through March 15 at Valerie Carberry Gallery, 875 North Michigan.