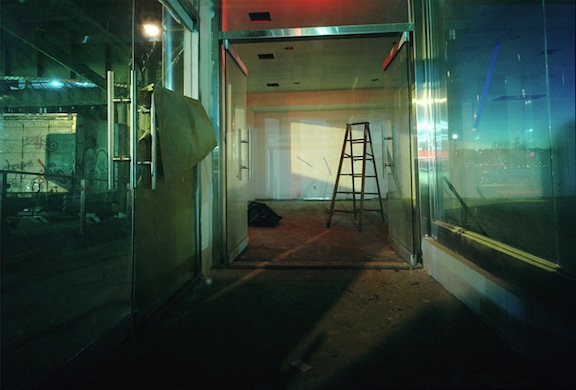 The accent is on the aesthetic surface rather than the depiction of the subject in the contrasting approaches of architectural photographers Lynn Saville and Reuben Wu, both of whom shoot structures at middle distance and in color, and each investing their subjects with a distinct sensibility.

A visual commentator on the great recession and its ravages, Saville goes out at night to capture eviscerated stores through their plate-glass fronts, bathed in glowing electric light verging on garish neon; her subjects are not yet ruins, but they could become so if economic recovery does not reach them. The play between the dazzling come-on of the light show and the abandoned commercial spaces creates a pure seductive effect; there is nothing behind the gleaming visual wrapping, no baubles to buy. 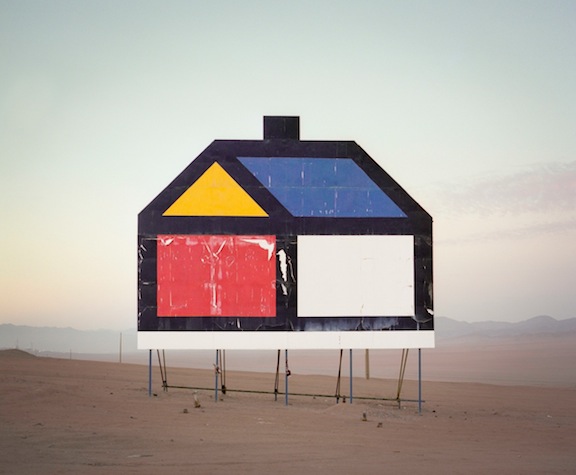 More a postmodern visual poet than Saville is, Wu goes around the world taking his subjects with expired film, which gives his images a muted, slightly attenuated, yet well delineated appearance, almost like photo-realistic painting. The illusion of painting, with its distance from ordinary life, comes out most prominently in Wu’s study of a weathered billboard showing a house that is planted in Chile’s Atacama Desert; the house has been reduced to a black outline filled in with red, yellow, blue and white segments, with no meaning beyond its surface of shape and color. Rather than conjuring with the illusion of what the bright lights of the big city hold in store, as Saville does, Wu performs the time-honored trick of redeeming the ruins of commercial failure through the saving transformation of art; such is the ability of photography to show the manifold possibilities of perception. (Michael Weinstein)