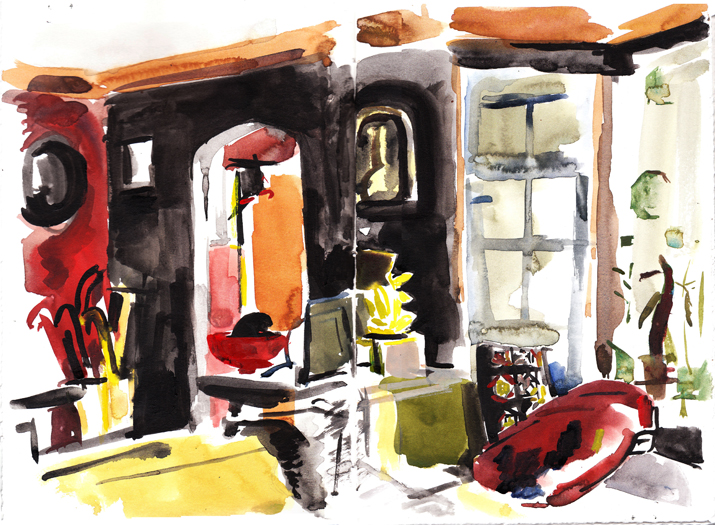 Dmitry Samarov has no mystic visions—he doesn’t travel to scenic spots, and no social, personal or philosophical issues seem to be troubling him. He just opens his eyes, and the visual world that envelops is so fascinating, he is compelled to respond in a style more expressive than descriptive, with ever increasing inventive facility. So, there’s nothing remarkably new in these paintings of domestic interiors, appropriately displayed in a West Town real estate office. Whether it’s his 2006 charcoal drawing of rumpled clothes in the closet or his 2013 watercolor of a jeep in a snowy driveway, the subject matter is as ordinary as the execution is virtuosic. Every nook and cranny of the visual field is filled with life—his life—which is calm, strong, joyful and assertive. That’s the same resilient, upbeat quality presented by American Regional painting from the 1930s—but this is not an “American Scene;” it’s Dmitry’s scene.

Within his domestic world of simple clothes, furniture and painting equipment, it’s his books for which he seems to have the most affection. All he can show are their spines, but those spines sing and dance in wanton disarray on the shelf because, presumably, he’s frequently pulling them out, shoving them back and piling them up. Their chaos gives him an opportunity for such intense abstract expression in oil paint, you wonder why he hasn’t been drawn to the freedom of non-representational painting. Perhaps he’s too earthbound to visualize a world without gravity. There’s something of the miraculous about a depiction of chaos that feels as tangibly real as it is carefully composed. (Chris Miller)