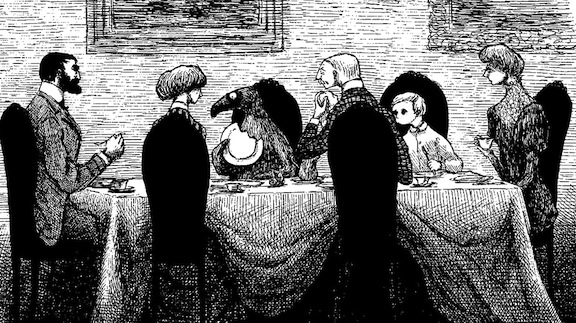 My first introduction to Edward Gorey’s playfully delicate drawings came during my childhood in the form of an illustrated 1982 edition of T.S. Eliot’s “Old Possum’s Book of Practical Cats.” Gorey’s drawings for the book jacket are included in the Loyola Museum of Art’s “Elegant Enigmas: The Art of Edward Gorey” and “G is for Gorey—C is for Chicago: The Collection of Thomas Michalak.” Taken together, LUMA triumphs in creating a rich, appealing total experience of Edward Gorey as an artist and the many roles he played in publishing. Gorey’s illustrated books are often coy treatments of sexuality and death, not so much intended for children as accessible to me and many others as an alternative to the more mainstream (and normative) comic-book culture of boyhood.

Born in Chicago 1925 and educated at Harvard—where he roomed with poet Frank O’Hara—the exhibitions revel in the literally hundreds of books he illustrated, many of his and some by other authors. Gorey’s world is a blend of goth and camp in detailed cross-hatched renderings of femme fatales, unlikely killers, ghostly children and other embodiments of Otherness and idiosyncrasy. One of his most popular works is the 1963 book “The Gashlycrumb Tinies, or After the Outing,” a mordant, alphabetized set of rhyming couplets that recount the grizzly demise of twenty-six schoolchildren in succession. Many of the original drawings for this book are on view, accompanied by the more gestural sketches that preceded the final versions. 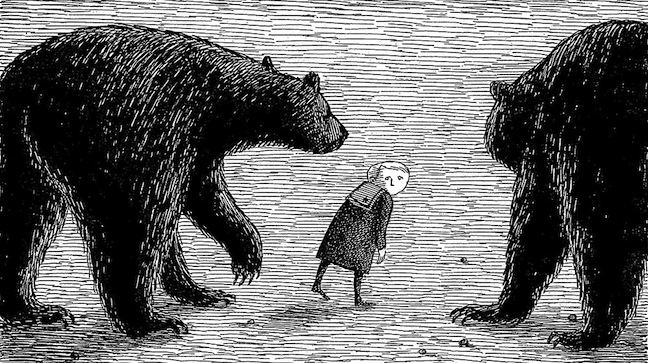 Gorey’s drawings and prints readily recall Goya’s suite of nightmarishly parodic etchings “Los Caprichos” from the 1790s. Their moodiness is here modernized by Gorey, such as in an exquisite untitled and undated drawing where a series of purloined letters flutter through a nighttime garden scene among what might be thieves, lovers, flappers and victims.

Through June 15 at the Loyola University Museum of Art, 820 North Michigan.