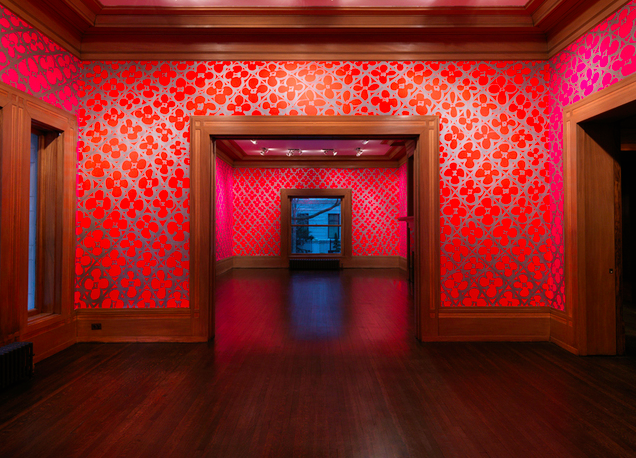 In 1919, German architect and Bauhaus co-founder Walter Gropius issued a clarion call for the synthesis of the plastic arts. Decrying divisive class distinctions, Gropius believed that together artist and craftsman alike could “create the new building of the future, which will embrace architecture, and sculpture, and painting in one unity…like the crystal symbol of a new faith.” Though the art world is more fragmented (and cynical) than ever, one can still find echoes of Gropius’ aspiration in Judy Ledgerwood’s fiery installation “Chromatic Patterns for the Graham Foundation.”

Awash in scorching fluorescent colors and metallic-silver floral motifs, the dignified interior of the stately Madlener House has been transformed into an exuberant and intensely optical experience. From floor to ceiling, the walls of this venerable structure vibrate, disarming and occasionally disorienting the viewer with fierce after-images and a bevy of simultaneous contrasts. Ledgerwood, a professor of art theory and practice at Northwestern University, has spent years exploring the fruitful fringes where art and craft, abstraction and decoration intersect and dissolve, and this installation may be her most potent yet.

While it’s probably a bridge too far to think that, as the exhibition statement suggests, a viewer will consider “the divergent ways that pattern, color, ornamentation and surface have been variously coded, gendered, repressed and embraced in art and architecture,” the fact is, “Chromatic Patterns” is a genuine synthesis of discipline and an utterly consuming, amazing physical experience, all made possible without resorting to electronic trickery or digital projection. It is a rare and noble achievement and one that Gropius would no doubt approve of. (Alan Pocaro)

Through April 5 at the Graham Foundation, 4 West Burton.