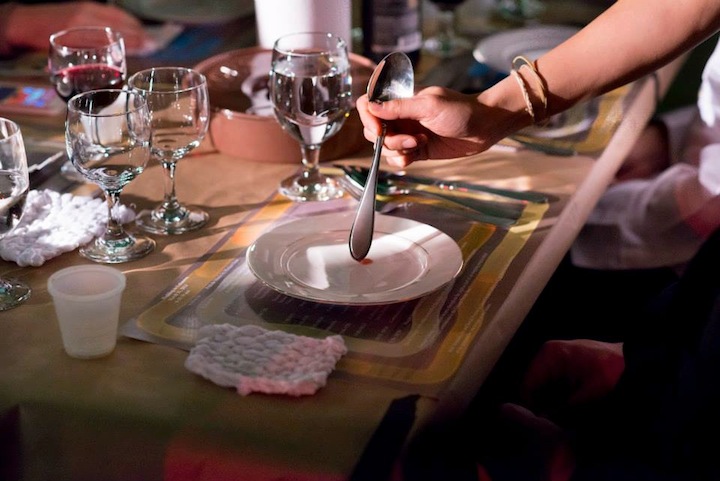 The Facebook invitation was cryptic: “A wedding of an unknown couple, with unknown guests, at an unknown location. If you are interested in attending please respond in the manner you see fit, otherwise disregard.”

The event was scheduled for March 21. At 6pm the guests began to arrive, ad hoc glitterati of the art world. Dressed in black and white they sat under a canopy of paper streamers duct-taped to the ceiling. They laughed, chatted, drank wine and every so often glanced over their shoulders in anticipation of the unknown couple.

“I always wanted to throw a wedding. I just needed to find a couple to marry,” explains artist Alberto Aguilar. He posted an ad on Craigslist offering a wedding free of charge to a couple willing to get married before strangers.

A young couple responded intrigued by the peculiar proposal. “We began planning the celebration but as the day got closer, they sent me a text message and told me that they had decided not to go ahead with it. I think in the end it was a last-minute fear.” 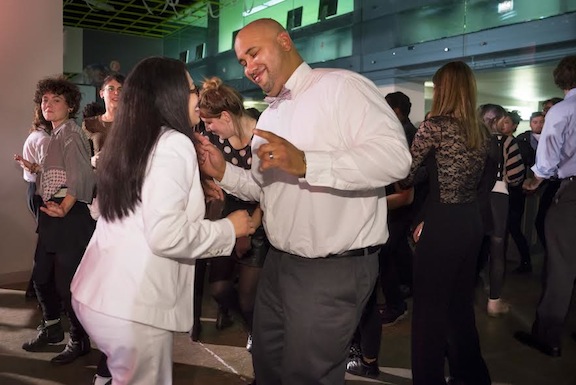 After the original couple fell through, the artist took to the steps of Chicago City Hall with a sign “Free Wedding Reception. Ask Me.” “Many people questioned if there was even going to be a wedding,” he admits. “I asked the audience to take a risk and in the end it really was everything that was promised.”

Nina and Charenzo Young, the “unknown couple,” married on a whim five years ago. At the time they were too poor to afford a reception and planned to renew their vows in a Las Vegas celebration that would include family and friends. Little did they imagine the reception the artist had in mind.

In “Wedding to Unknown,” the artist stepped into the role of wedding planner. Plastic foldout tables were set with intricately decorated place-mats detailing a night of bizarre events. Through the chant of the Strawberry Moon Women Singers, Native American shaman Ben Yahola told the indigenous folktale of the tobacco plant. Lost in the stuttered cadences and forgetful pauses of the medicine man, the story drifted into the realm of the surreal.

“At a certain point I questioned whether what I was doing was art or not,” admits Aguilar. Staged as part of the exhibition “Risk: Empathy, Art and Social Practice” at the Glass Curtain Gallery at Columbia College Chicago (through April 26), the playful performance sidesteps the politicized agenda of socially engaged art. Instead, it seems to thrive within the nebulous realm of relational aesthetics, where the work of art itself is the connection between individuals. Never too serious in his role as artist turned wedding planner, Aguilar examines the existing cultural form of the wedding as an artistic mode to foster a temporary community of strangers.

What lingers from that night are the accidental, unexpected moments—the screeching of the microphone, the delayed teleprompter, the young couple unsure of where to look and where to stand. It was these unrehearsed moments of imperfection that made room for the sincerity often missing in the austere space of the gallery. (Annette Elliot)