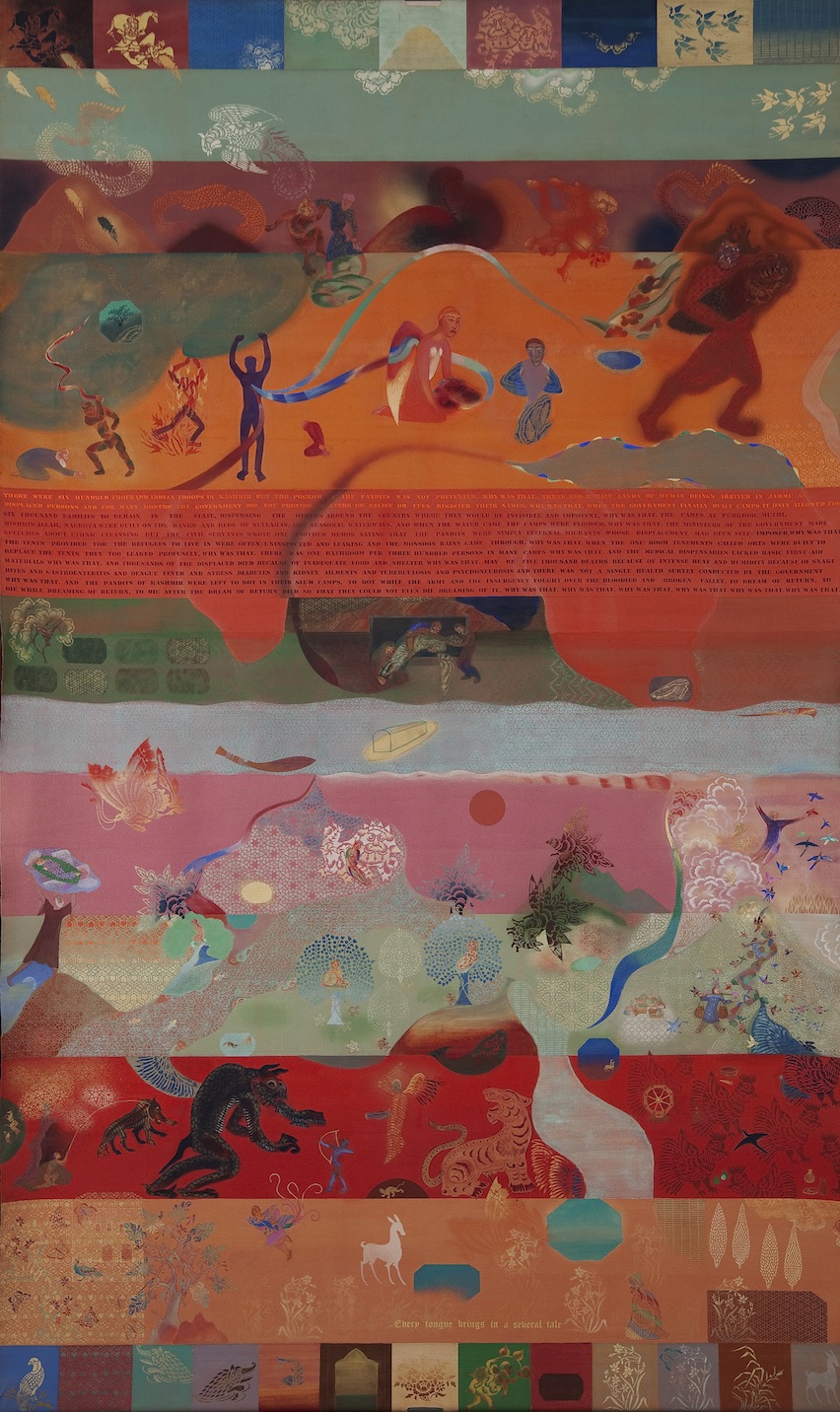 New Delhi artist Nilima Sheikh has been applying the practices of traditional Indian painting to contemporary Indian life for more than five decades, and Kashmir is a beautiful mountain valley whose history has captured her imagination. It has also been in the path of many plundering armies and more recently the focus of a territorial dispute consequent to the 1948 partition of India and Pakistan. So it’s a good setting for the trouble-in-paradise theme that Sheikh has chosen for eight ceiling-hung banners.

In color, scale and beauty/violence, these cloth banners, with painting on one side and text on the other, recall earlier epic projects, like the Hamzanama completed for Emperor Akbar in 1577. Similar to those projects, the overall tonal patterns are beguiling, even otherworldly, and it is not the work of a single artist. Sheikh used patterned stencils cut by a member of a Mathura family of traditional Sanjhi paper cutters. Other details come up short. She could have employed skilled calligraphers and figurative specialists, as well.

The development of a peaceful, prosperous state from inter-tribal and sectarian anarchy is a major challenge throughout the post-colonial world, just as it was for earlier South Asian dynasties and empires. Traditional art, usually religious, would offer myths and ideals to enable viewers to experience the possibility of a harmonious world. But, as a modern Indian artist in the tradition of Tagore and Subramanyan, Sheikh’s art is more about the problematic self in modern times, inspired, in this case, by the alienation and nostalgia of the Kashmiri-American poet Agha Shahid Ali (1949–2001). Shahid may have occasionally felt badly for his homeland, but he remained a successful American academic. Similarly, Sheikh’s work refers to myths but only as fleeting, nostalgic elements of a lost world that now lives only in a comfortable and safe dreamland—the “Kashmir in Your Dreams”—as referenced by the exhibit’s title.

It is daring to work within a classical tradition that historically set such a high bar for both narrative and visual effects, but weaker details leave these pieces feeling watered down. (Chris Miller)

Through May 18 at the Art Institute of Chicago, 111 South Michigan.