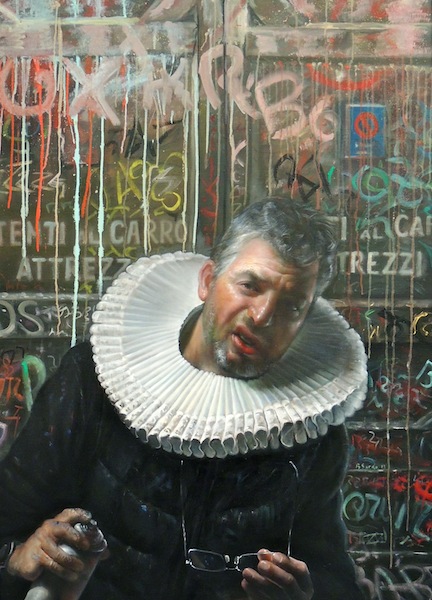 Modern life is more like a problem than an opportunity in “Modern Metaphors,” a showcase for four makers of imaginary worlds from Chicago. David Kroll retreats into the stuffy, quiet serenity of a seventeenth-century drawing room, while Katherine Ace withdraws to the scary-safe fantasies of medieval fairytales. The other two artists also look backward, but are more confrontational. Bruno Surdo’s Pop-Baroque-realism seems to say: “Our world is a madhouse, but I can take it!” while Sergio Fasola’s photo-surreal conglomerations are too visually disruptive to think about anything else.

There are some amazing paintings here, beginning with Surdo’s self-portrait as a churlish tagger sporting a seventeenth-century millstone ruff collar. He carries a dripping can of spray paint that hardly does justice to this artist’s incredible facility with a brush. When he depicts a face covered with hands, the result might well be a “Penitent Magdalene” as done by Rubens or Van Dyck. He’s that good. The quality of design diminishes as he adds more figures, which might suggest that he’s more comfortable with solitude. 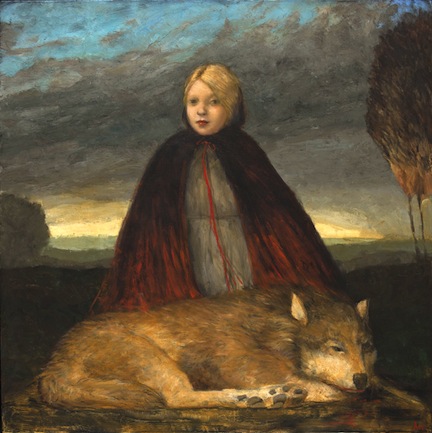 Katherine Ace shows a more positive attitude toward self as she interprets Grimm’s tales as adventures in self-fulfillment by girls who overcome adversity. Even “The Fisherman and His Wife” has been modified to present a young woman’s perseverance rather than the destructive ambition found in the original version, perhaps because the artist herself is so highly motivated. Eight of the twelve paintings in this show, all depicting life-size figures, were painted in 2013, and that’s less than a fourth of what she painted that year. Some pieces look like they were done quickly, but others have a surprising intensity of sharply painted or collaged detail, with the caffeinated energy of the glossy popular magazines found in supermarkets. When does this artist ever sleep?

Like a cool gelateria, the gallery of David Kroll’s antiquarian still-lifes has been set apart, sequestered within a cubicle whose white walls contrast with the blackness of the cavernous outer gallery that envelops it. After all the pulsating theatrics elsewhere in the exhibit, it’s refreshing to marvel at Kroll’s close-up magic, making tiny stuffed birds come to life in an airless world. That floor plan was but one of many thoughtful decisions in a curatorial plan that invites reflection and comparison among painterly representations as peripheral to the world of contemporary art as Rockford is to Chicago. (Chris Miller)

Through May 4 at the Rockford Art Museum, 711 North Main, Rockford.