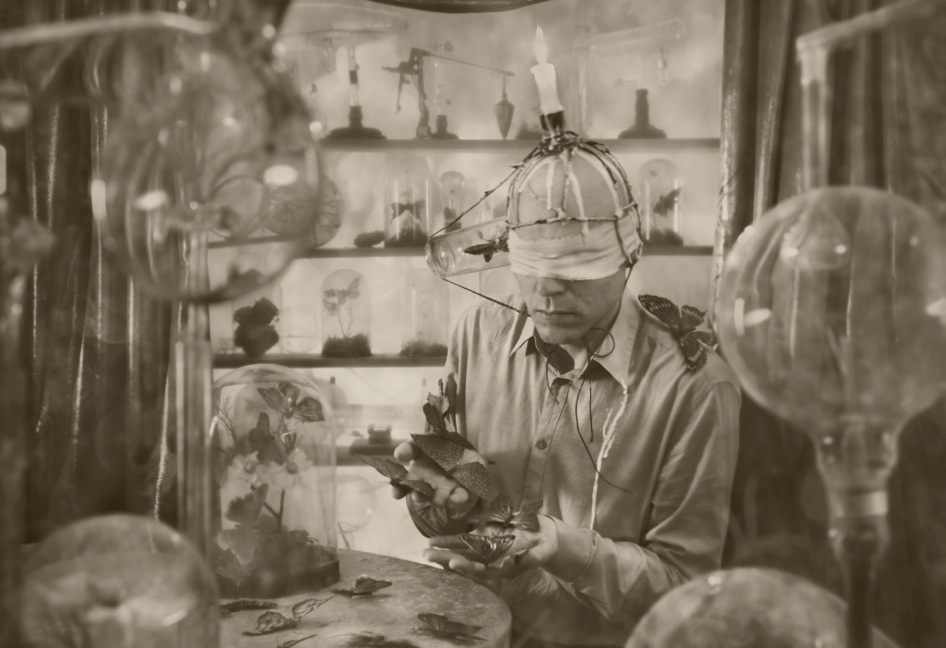 Among the top scenario photographers on today’s scene, the team of Robert (the actor in the still dramas) and Shana (who “choreographs” the performance and takes the shots in black and white) ParkeHarrison impressively combine wit, whimsy and deep-cutting visual commentary in their crowded yet compact images. In their latest series, “Gautier’s Dream” (a bow to French artist Theophile Gautier, who “inspired” them), the ParkeHarrisons continue their reflection on the human puzzlement with nature, but this time they are no longer out to pinpoint the ironies attending “saving” our benighted planet; they are now at a more fundamental level of problematizing conventional beauty—in this case, flowers and butterflies. You’ll experience the Notebaert Nature Museum’s living butterfly wing differently than you might have after you have seen Robert, legs askew and hands outstretched, struggling on the floor after falling off a chair, besieged by a cloud of Lepidoptera. Or your botanical proclivities might be disturbed by the sight of Robert sporting a daisy in the lapel of his jacket, his head replaced by an unkempt bouquet of wild flowers that turn him into an ominous floral monster. Add to those two shots the image of Robert, bedecked in one of the pseudo-scientific contraptions that the ParkeHarrisons delight in putting into their stage sets, laboring grimly in a plant laboratory, and you will realize that the artists have concluded that the war between culture and nature is far from over. There is no political import in the ParkeHarrisons’ commentary; they have deployed a postmodern genre to imagine vividly a sometimes zany existential predicament. (Michael Weinstein)