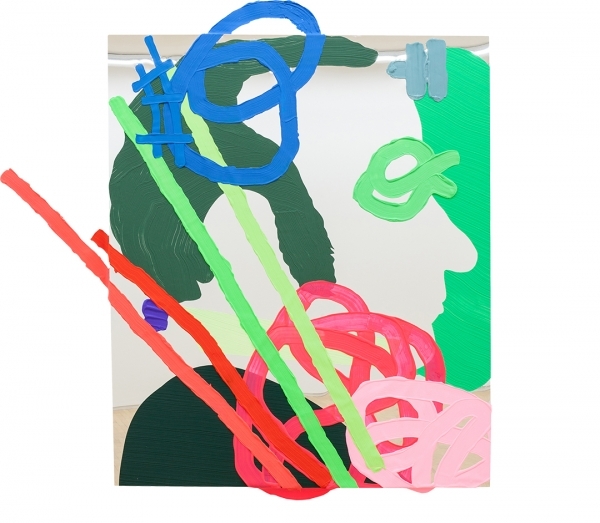 Occupy Wall Street may have fizzled out, but that doesn’t mean José Lerma isn’t still paranoid about the financial industry. In one installation, a ten-percent slice of a brightly colored circular stage is multiplied by kaleidoscopic mirrors to give the illusion of all 360 degrees. He’s titled it “A Critical Analysis of Central Banks and Fractional-Reserve Banking from the Austrian School Perspective.” What it demonstrates is that banks lend money that isn’t theirs. Like a carnival fun house, you need only view it once and laugh.

But his second installation, “Gloriosa Superba,” is both more ominous and more appealing, with some of the most exuberant painting that I have ever seen. Floral patterns of rubbery, sharp-edged shapes have been laid upon, and sometimes extend beyond, five-by-six-foot mirrors that reflect everything in the gallery. Each piece is supposed to represent one of the seven founders of the Rothschild banking dynasty hiding within the bloom of a tropical flower named in their honor. If you look closely, you just might recognize them, and something like a column hanging from the ceiling, representing the pillar at the London Stock Exchange where Nathan Mayer Rothschild plotted to crash and then bought up the British economy after the battle of Waterloo. Or, at least that’s the conspiracy theory published in 1887, drawn from unspecified sources.

The inter-reflection among the mirror surfaces suggests the interrelation of a bank with its international branches. But surrounded by these colorful, dynamic designs, the gallery space feels like a day-care center, bursting with the manic energy of small children. It brings to mind the stained-glass windows of Frank Lloyd Wright’s Coonley Playhouse, only more fun and playful. It would be great to begin each day with this kind of manic energy bath, as oblivious to paranoia about the history of the world economy as a four-year-old. It’s also a good way to remember that every day is full of new possibilities, many of which were funded by the same bankers this artist mocks and deplores.

One such bank-sponsored project is BMO Harris Bank Chicago Works exhibition series at the MCA, in which Lerma participated last year. In that show, his portraits presented a bank’s executives as monumental dimwits and now he’s portraying some pioneers of modern banking as secretive and cunning. How much further can he push the financial community before it pushes back? Or, maybe it doesn’t need to—if the discussion never rises above child’s play. (Chris Miller)

Through May 17 at Kavi Gupta Gallery, 835 West Washington.