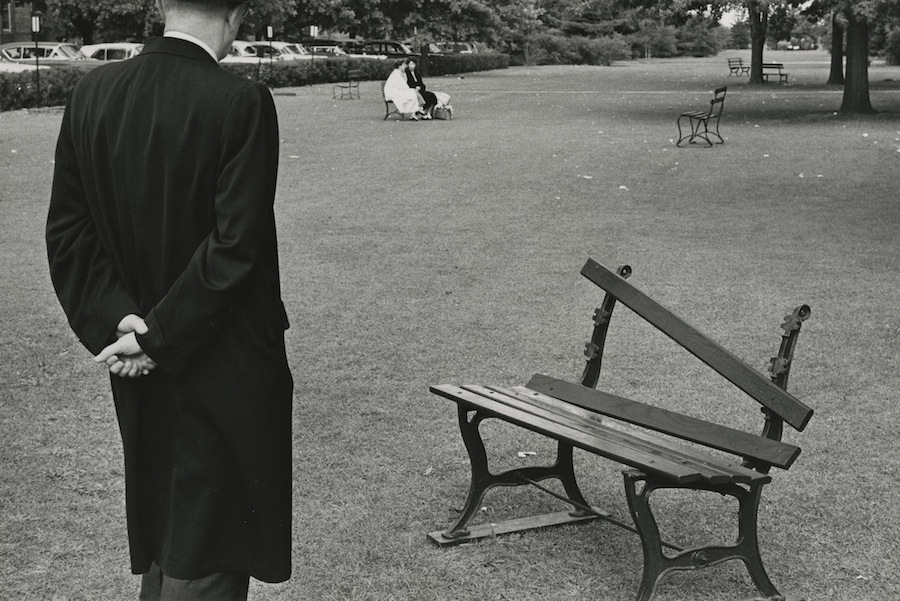 The epitome of modernist photography, André Kertész embraced and mastered every genre of his time, from the realist document to the surrealist fantasia, in a career spanning the decades between World War I and the 1960s, first in Budapest, then in Paris and finally ending up in New York City, where he remained, as World War II loomed and then the years passed. We now get a rare chance to see forty of Kertész’s images from the group that he contributed to the landmark 1967 “Concerned Photographer” show, constituting his self-chosen retrospective. In a welcome touch, the gallery has included the wall text that Kertész wrote for each of the photographs on display. Beyond the scope of the kinds of photography in which Kertész engaged was his exceptional gift of fusing divergent sensibilities into integral images; in the same work he could be at once formal, geometrical and sculptural as well as emotional, flowing and dynamic. Although it is arguable that Kertész achieved perfections of the photography of his time in each of his periods, the late New York images are his most philosophically profound, where he plumbed the depths of existential isolation, crystallizing the harsh response to life in concentrated visual metaphors. Nowhere is that effort more pronounced than in “New York City,” from 1963, in which a man, taken from behind, stands before a park bench, one of the slats of its back having fallen onto the seat and the other, at a slant, barely hanging on. Explanatory text is not present or necessary here; it is well known that Kertész’s life in America left him with a sense of displacement and isolation that resonated with the temper of alienation of mid-century Western culture. Our fate, for Kertész, was to end by contemplating a broken life. The mood of the beholder in “Broken Bench” is impassive, his expression unknown. (Michael Weinstein)

Through May 24 at Stephen Daiter Gallery, 230 West Superior.