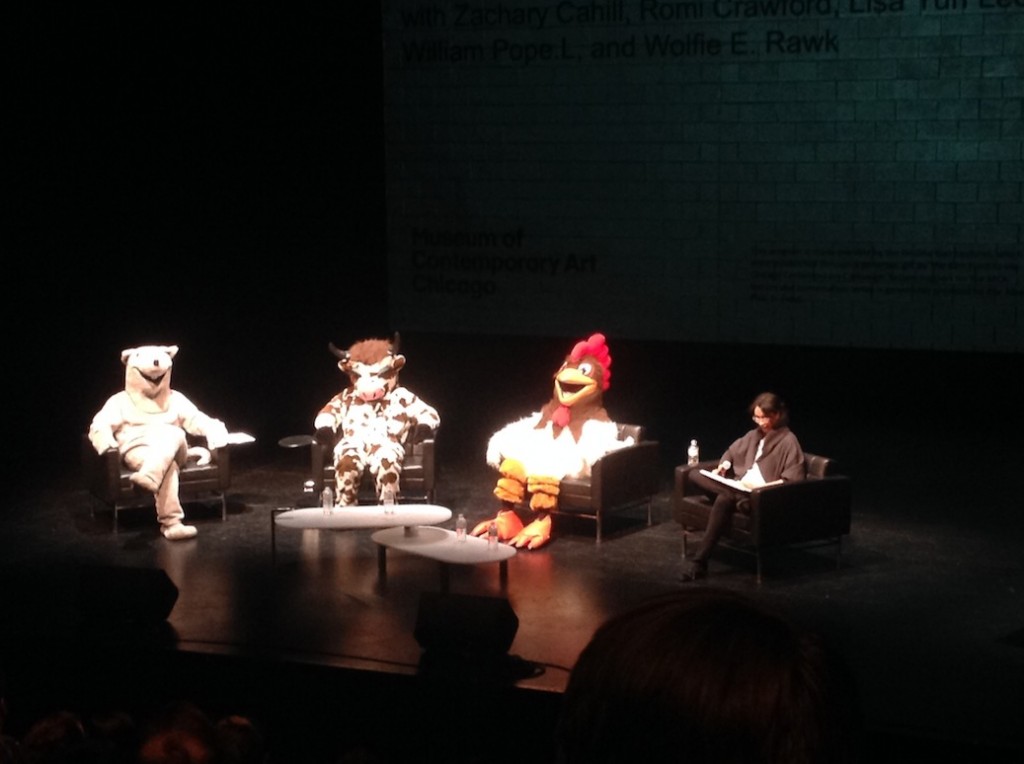 To what end do we discuss diversity in museums? Is the dialogue productive? Whom do diversity panels serve? Can they actually affect institutional change? What will diversity look like in fifty years? What does a crowd rendition of “America the Beautiful” conducted by William Pope.L in a rat costume sound like?

A panel discussion at the MCA on April 17 addressed these questions and more. Publicized as part-performance, part-discussion, the evening featured a conversation between instigator Pope.L, artist Zachary Cahill (aka cow), and director of UIC’s School of Art and Art History Lisa Yun Lee (aka rooster), moderated by SAIC professor Romi Crawford (uncostumed). Artist Wolfie E. Rawk served as the discussant/pot-stirrer, launching controversial questions and making poignant observations from their seat in the audience (Rawk, who uses the gender pronouns they/them, chose to forego an animal costume in favor of their “token trans” uniform).

At the onset, a distinction was made between talking about diversity, and talking about diversity panels. Further conversations focused on the chasm between talk and action, the inability to measure the quantitative or qualitative outcome of such debates, and questioned, as Pope.L put it, what the “institutional utility of diversity panels” actually is. The costumes, which initially could be written off as performance hijinks of Pope.L’s, proved an effective way to add some levity to a conversation that got fairly heavy at times. The costumes leveled the playing field visually. Instead of a black man, a white man and an Asian woman, viewers saw three farm animals.

Cahill and Rawk posed questions directly to the MCA staff, contributing the two instances where it felt like tangible institutional change was possible as an outcome of the evening. In response to Cahill’s question regarding what exactly the museum was hoping to accomplish by hosting such events, the MCA’s director of education Heidi Reitmaier articulated that the museum hopes to find ways “to be less exclusive and smarter about engaging with artists and audiences, trouble traditional/Western art historical and creative practices, and act as a better agent to serve multiple, diverse publics.”

Rawk pressed this line of questioning further and challenged the MCA to look closer at their own institutionalized vehicles of oppression and make the results of the inquiry accessible to the public via infographics. Rawk inquired “what the racial and gender make-up of the security department is versus that of the museum administration and curatorial staff, how pay grades differ between genders and departments, and whether the MCA healthcare policy is trans-inclusive.”

Reitmaier acknowledged that “we don’t know, and we should,” prompting an unexpected intervention from Pritzker Director Madeleine Grynsztejn, who chimed in to “help out” her colleague. Grynsztejn expressed an interest seeking out the demographic studies Rawk proposed, stating, “as far as I know, I have nothing to hide, but it is something I am interested in looking into.” (Erin Toale)