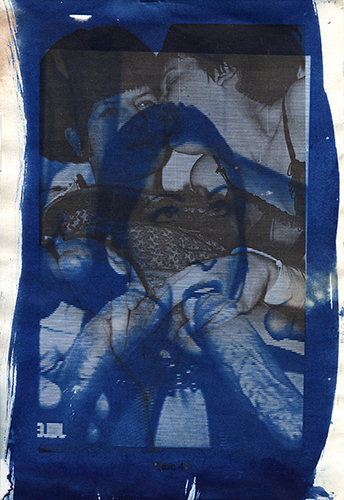 What happens when you layer commercial pornographic images (shot off a computer screen) over plates from a fifty-year-old sex-education manual, and then print the composites as cyanotypes? That is what Adam Holtzman has done in his “Old and New” series of nine small-format photo-works, and the result is a gruesome synthesis that transforms titillation and hygiene into grotesquerie. In Holtzman’s most ripping image, which could be appropriately called “The Blowjob from Hell” (the artist has not titled his works), we see a woman kneeling on the floor performing the act on some misshapen monster lying on a bed—a tangle of legs and torso scrunched into a cubist agglomeration. The cyano-blue surface is streaked and scarred with brown patches that look like tatty lace, instigating the thought that Hieronymus Bosch might have been privy to this vision, but couldn’t take it, so Holtzman came along and did the work for him. The same effects mark the other works in the series, creating a uniform sensibility that suggests the fascination of the abomination. Yet what is the meaning? There is no immediate moral lesson to be drawn from Holtzman’s works, nor is there an obvious cultural critique, despite their source images; there is, instead, a sense of the absurd that takes hold and then grows into the laughter that can attend the recognition that the human condition is so contradicted and confused that it can never pull itself together into a happy reconciliation. Holtzman can do Bosch one better, because Holtzman is not hung up on evil; he is beyond good and evil, and can even find something to affirm in depravity. (Michael Weinstein)