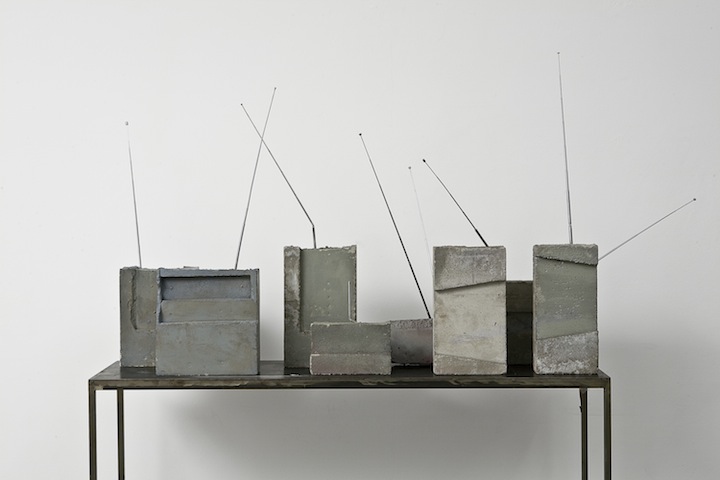 As a visual artist, taught to appreciate form, I have always been wary of people who make too much of narrative. Yet at the heart of Isa Genzken’s MCA retrospective, which, like all career overviews, tends to cultivate a narrative arc, is a startling renunciation of form. It seems almost as startling as Pollock or Guston’s leaps out of representation into abstraction in their day.

In the early 1980s, Genzken was making extremely refined long ellipsoid shapes of lacquered wood that lean against the wall accompanied by a rigorous series of cold grey and black gouache paintings that trace a diminishing or increasing line of yellow. They look a bit like windows, and she would return to this form in later work. Suddenly, one enters a room full of rough plaster, concrete and epoxy sculptures called things like “My Brain” and “Pile of Rubbish.” Some radios made of concrete on a metal table against the wall (“Weltempfanger” from 1987-89) may hold the answer, or if one pursues the narrative line, foreshadow a representational engagement with the world that unfolds as she evolves. 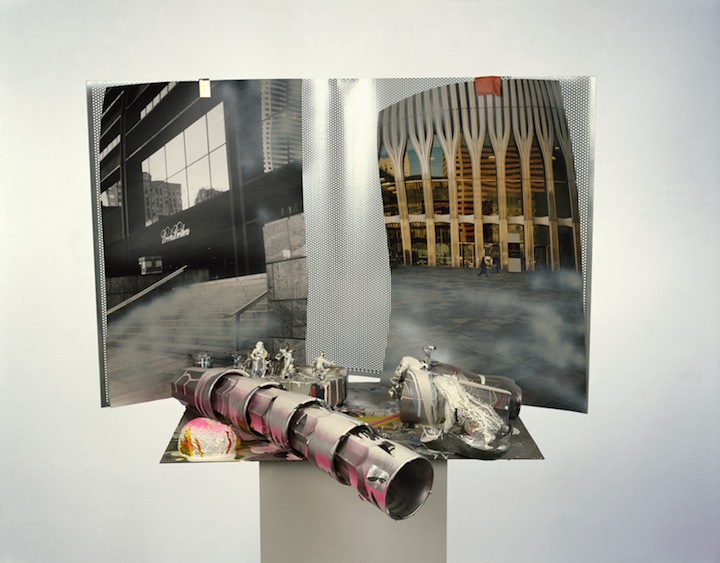 Genzken is a lover of cities, and large dizzy scrapbooks commemorating visits to New York, a career-spanning relationship with architecture attest to her commitment; a series of installations entitled “Ground Zero” record her response to 9/11. A large room full of pleasing architectural forms, Chicago-style windows, Xs made of yellow resin (there is something dissonant about the resin) and metal represent Genzken’s formalist productions of the later 1990s.Then suddenly again, some disturbing epoxy resin blobs, (“Haube [Bonnets]” from 1994) connected with a break-up (she had been married to painter Gerhard Richter) but look like papier-maché blobs Franz West was making at the time, and she has abjured minimalism and her formalist investigations into the seductions of modernist architecture for garish assemblages, simultaneously playful and critical, in a series called “Fuck the Bauhaus.” The assemblages, abandoned suitcases, suspended astronaut uniforms and installations of dressed mannequins have a morbid, abject feeling which German art historian Benjamin Buchloh connects with a psychotic state brought on by “total submission to the terror of consumption.” However, Genzken’s work is diverse. She moves between materials and forms; the story is not simple. The viewer is left to speculate on the relationships between Genzken’s careering as a subjective narrative and/or a record of the sculptor’s engagement with the materials that have produced contemporary culture. (Janina Ciezadlo)

Through August 3 at the Museum of Contemporary Art, 220 East Chicago.