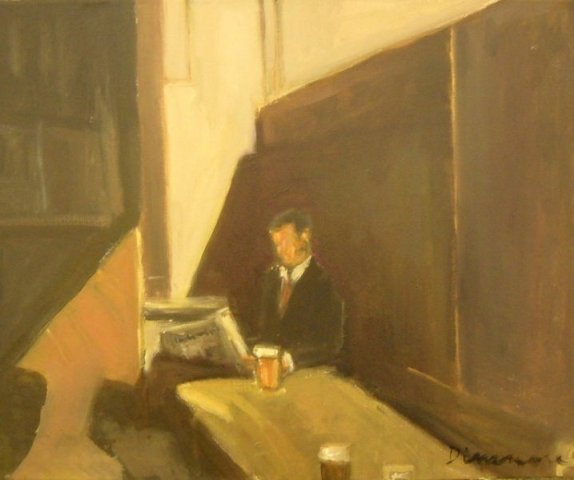 “Reader with Pint,” oil on canvas

The Midwest is so solid, steady and predictable that creative people tend to either move away or dive deep into the wacky world of the subconscious with their artwork. But not Stephen Dinsmore, the Nebraska native who has never strayed far from home. Even when he paints a beach in Florida, it feels more like a calendar photo above a desk in Omaha, just as his floral tributes to Matisse feel more like the reproductions sold in local frame shops.

He paints baseball games, flat landscapes and faceless people sitting in kitchens or diners. Some lonely scenes almost feel like Edward Hopper, but Dinsmore does not make sharp edges, leaving his shapes more cloud-like and dreamy. There’s less tension and foreboding in this daydream world with no anticipation of either joy or disaster.

And yet—there is a persistent energy in his work, like a tree growing slowly and majestically over the decades. He’s not trying to be anyone other than himself. He offers no puzzles, no revelations, no dark secrets, no inner fire—just that quiet orderliness that is only recognized as precious when it’s gone. My favorite piece is his depiction of two dogs on a porch. Palpable is their rambunctious inner life, as well as their anticipation for whoever is approaching the steps.

These are paintings that look better as reproductions, since the overall compositions offer more satisfaction than areas of detail. Dinsmore does not offer intense virtuosity. But he also does not offer sentimentality or tedious catalogs of accurate detail. What he does offer are lyrical visions of the ordinary, often prompting the thought, “yes, that’s exactly how it feels.”

You might call him a Midwest regional painter of the twenty-first century. Unlike his predecessors from the 1930s and 1940s, he doesn’t do crowd scenes. His figures are either solitary or with one other person, as is appropriate for our atomized society with its ideals of self-fulfillment. Why is this genre so rarely seen? Perhaps because of one other Midwestern tendency: the deferral of cultural authority to the coasts. (Chris Miller)