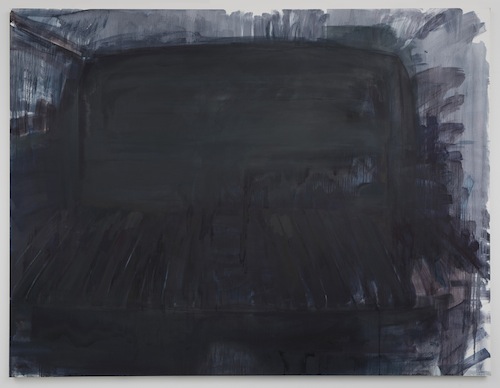 I consider leaving a gallery extolling the virtues of a painting that, upon entry I thought was dreadful, to be the mark of a good show. The about-face typically indicates a challenge to taste; biases poked and prodded at, and senses ultimately rewarded. Object lesson: “Backseat,” painter Ben Murray’s diaphanous, Morris Louis-inflected ode to fuzzy memories and suburban youth.

Deep and brooding, this large-scale canvas initially struck me as little more than an ill-defined mess. Ten minutes in, blundering brushstrokes revealed tantalizing nuance. The lazy black patina that shrouded the scene in a dense haze dissolved into translucent sheets of glistening blue and violet. The backseat, scene of teenage mating rituals, stale Cheerios and lost letters at last emerged from the misty bonds of the gossamer surface. The effect was spellbinding.

“Centerville” is Murray’s first solo show with Monique Meloche Gallery, and it’s brimming with these kinds of sensory revelations. But not every piece compensates patience equally. Some works, such as the allegorical rumination on life and death, “Bed,” or the understated melancholy of the netless basketball rim in “Hoop,” are potent because of what they depict rather than how they’re depicted. Their ambitious scale isn’t met by the variety of touch or incident that endows “Backseat” (at six-and-a-half feet by eight-and-a-half feet) or the eerie green-gray “Corner” with their beguiling power. Consequently, they’d be just as good or better at half the size.

What sets “Centerville” apart from the bevy of thoughtful, aesthetically stimulating shows currently up around Chicago is the lasting impression that the best paintings are akin to icebergs. The somber hues and pensive objects are only a small portion of what’s transpiring within these pictures. The rest remains hidden—memories lurking beneath the surface of the ever-widening sea that separates our past from our present. (Alan Pocaro)

Through May 31 at Monique Meloche, 2154 West Division.