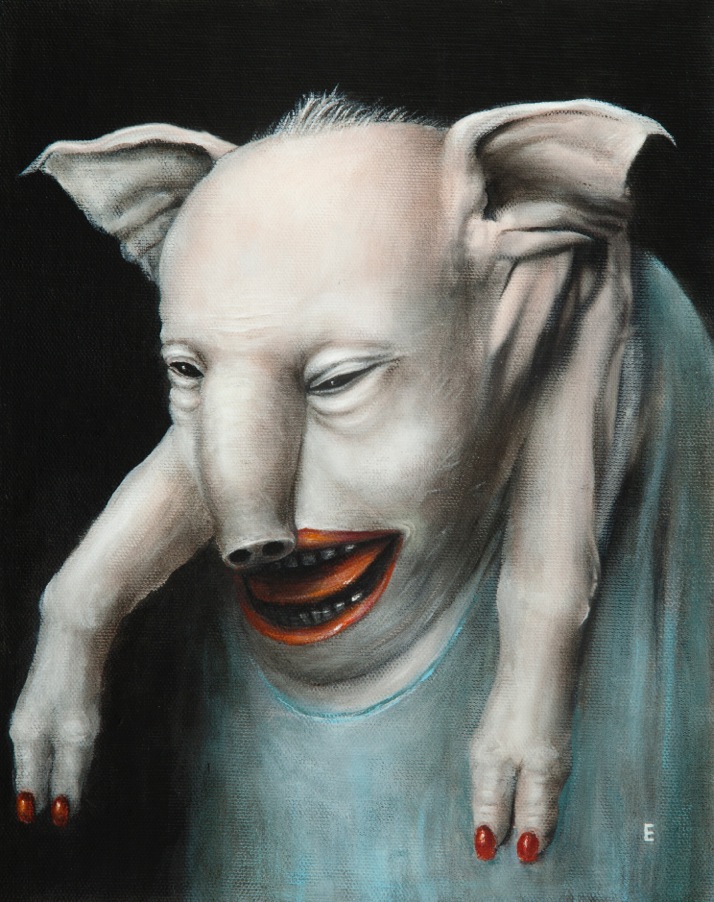 Like Diane Arbus and Joel-Peter Witkin, Elizabeth Ernst plays with the grotesque, only she can create with abandon because her cast of characters in the human freak show are dolls that she has made to populate her painted scenario photographs and portraits. It is a circus sideshow that Ernst serves up, but she subverts our normal voyeuristic expectations by making her figures humanly accessible, even warm, so that they beg for connection from the viewer, despite their deviations from the norms of appearance. Even a smiling, snouted, pig-headed figure with her tongue sticking out, sporting red lipstick and lacquered nails, is someone we might comfortably join at a dinner table. Indeed, there is an undercurrent of good-humored wit in Ernst’s images, as when we witness a poker game in which a male and female figure are playing with a bird-headed doll, and only the hands of a fourth participant are visible in the foreground. Playing with the grotesque in Ernst’s case is what anthropologists call deep play, invested with pointed complex psychological import. A male figure in a white shirt and tie emits a Munchian scream as a buxom lady presses against him, determinedly planting a kiss on his cheek. Ernst reports that she has lived with her characters in her imagination for decades and it is obvious that she has come to love them. Each one has a biography, but the back story is not provided at the exhibit and, if it were, that could well have detracted from the visual intelligence that has been compressed into the images. Ernst’s characters are as emotionally complex as any human beings. Rather than telling us to be tolerant of the freaks, she is showing us that we are already part of the show, just as we already are—look around you and look in the mirror. (Michael Weinstein)