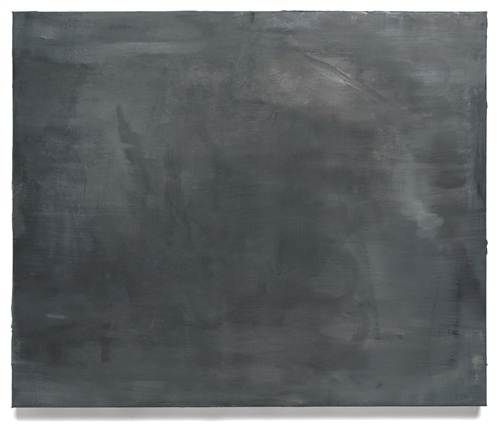 In just over four-hundred words, the press release for David Schutter’s excellent new show, “What Is Not Clear is Not French,” covers a lot of ground. In it we learn about an obscure eighteenth-century French writer, investigate “teleologically bound systems” and consider how the show’s eight oil-on-linen works evolved from Schutter’s process of re-performing encounters with specific, though unnamed, French paintings. Strangely, the exhibition’s overriding condition is never mentioned: these paintings are entirely abstract and they are all gray.

Grayness has long been regarded as symptomatic of nihilism—an aspect of the reductive materialism that’s become endemic to our culture and our art. But in Schutter’s paintings grayness is a doorway. In these enigmatically coded works (references to precise gallery locations at the Art Institute of Chicago and the National Gallery of Art assume the role of titles), grayness is not only the union of opposites such as black and white, grayness also symbolizes the transitory state between sleep and wakefulness, remembering and forgetting.

How the artist achieves his gray is part of the works’ mystery. It’s not achromatic; hints of green and red-orange are detectable within the mire. And though Schutter’s viscous surfaces are labored, they never feel overworked. This isn’t gray borne of frustration, of frenzied laying-in and wiping out. In Schutter’s hands gray is always a gentle moment of becoming. In nearly every work, forms seem poised to appear, only to quickly recede and vanish, exemplifying the potential for actualization embodied in gray.

Content is recognizable form, even if the recognition defies description. In “What is Not Clear is Not French,” Schutter has taken the condition of uncertainty and staked out an aesthetic territory around it. Gray paintings abound in late twentieth and early twenty-first century art. But rather than mourn the loss of social cohesion as so many do, Schutter’s works’ celebrate the creative possibilities inherent in ambiguity. (Alan Pocaro)

Through May 31 at Rhona Hoffman Gallery, 118 North Peoria.