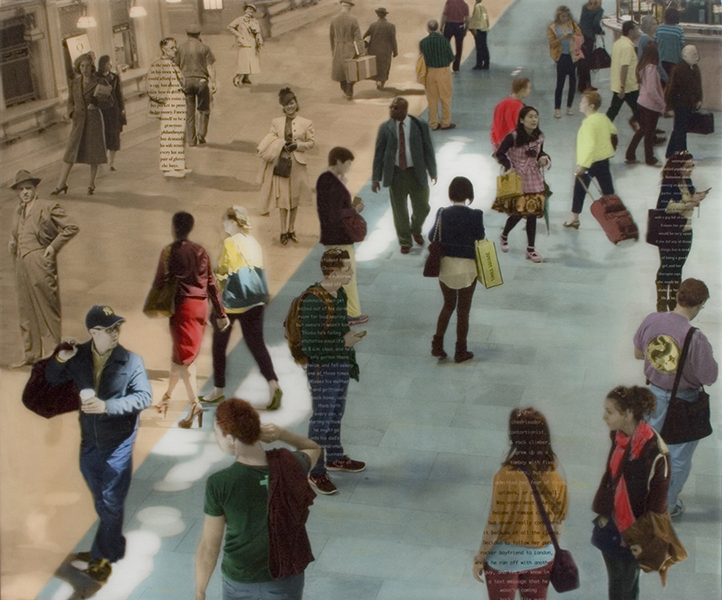 In “A Likely Story,” an ingenious visual commentary on the continuities and ruptures of past and present, Sherry Karver has produced composite photographs of crowds of people in public places divided into color depictions of mostly young contemporary people and black-and-white appropriated takes of individuals from decades ago shot in the same spaces. Through the offices of the computer, Karver’s scenes are constructed digitally and seamlessly with the figures from the past, usually in the background, serving as a ghostly chorus appearing to comment on today’s on-the-go cell-phoned streets whose urbanites pursue business and leisure activities just as we are used to seeing them do and even do ourselves. As it turns out, the people on the sidewalks of dense downtown thoroughfares haven’t changed much, if at all, in essential ways over the years. Sure, the fashions are far more casual now and there is ubiquitous portable electronic technology; but the same mix of behaviors and attitudes—from detachment to intimate connection, grim determination to good-humored relaxation—marks both past and present. In their position as chorus, the ghosts from the past seem to recognize themselves in our supposedly new times. All eight of Karver’s images convey the same sense of non-threatening, even comfortable, normalcy—the same normalcy that there has always been in the city. In “Fond Memories,” the most representative of Karver’s images, a sidewalk taken from above is filled with random patterns of pedestrians in both foreground and background, with the members of the chorus who seem to be looking at the contemporary spectacle displaying attitudes from mirth to worldly wisdom. As Karver shows, the underlying structure and dynamics of urban life and personality were laid out and set in motion long ago, and technology exists within them. (Michael Weinstein)