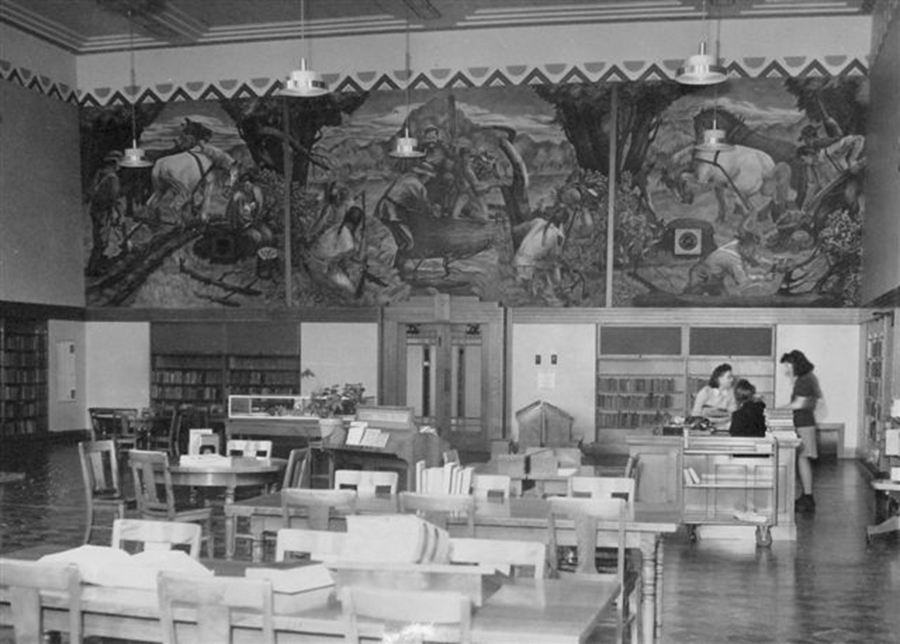 Santos Zingale’s mural “The Landing of Captain Knapp at Racine” when it was installed in the Mitchell Elementary School library in Racine, Wisconsin

When a fire blazed through the Mitchell Elementary School in Racine, Wisconsin, earlier this year, it led to disaster relief workers discovering a forgotten piece of the school and region’s art history. The three-panel painting by Santos Zingale titled “The Landing of Captain Knapp at Racine” and measuring about twelve feet by forty-three feet was completed in 1941 as part of the New Deal Program. It remained on view in the school’s library until the mid-1950s when it was removed and placed into storage. Six decades later after most of the building that housed it had collapsed, the panels have been recovered.

Santos Zingale is variously remembered as a surrealist and a social realist who was a lifelong Wisconsin resident. This history painting shows those influences in its depiction of Gilbert Knapp founding Port Gilbert as he lands on the shore of Lake Michigan and is greeted by indigenous peoples. The flanking panels show settlers farming with horses and plows.

The Chicago-based Conservation Center will undertake the paintings’ conservation in a project that is estimated to take nine to twelve months. The artwork is still undergoing examination, but it’s so far been determined that the paintings have sustained water and mold damage. Meanwhile, the Racine Unified School District will be looking for a place to place the mural back on public display following the work’s restoration. (Matt Morris)