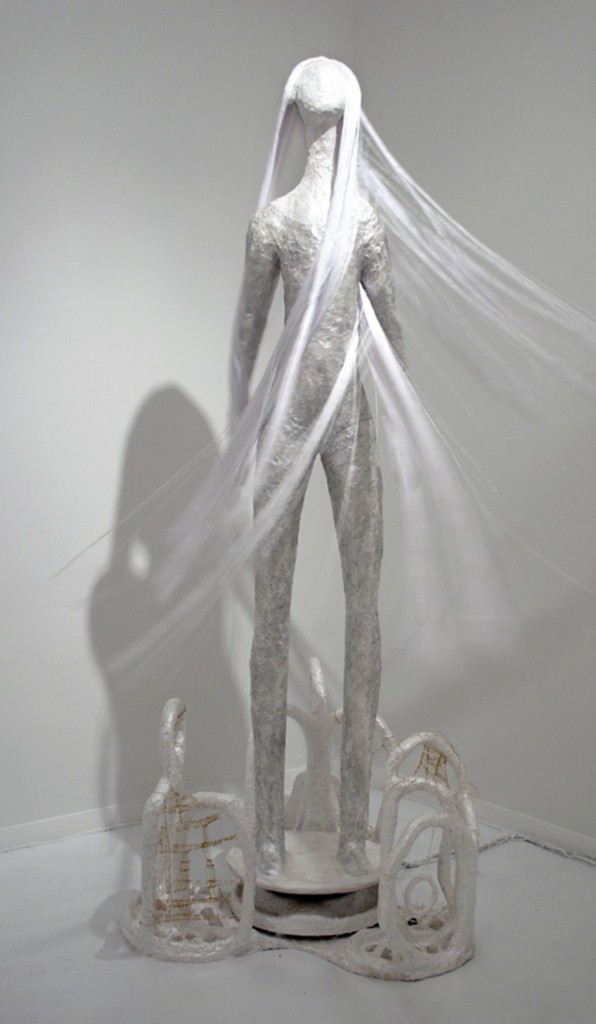 Mindy Rose Schwartz’s recent exhibition of sculptures at Pilsen’s Queer Thoughts walks the messy border between the fine arts and craft. Schwartz, who teaches the Extreme Craft course at the School of the Art Institute of Chicago, has a history of complicating this border, teasing exciting formal, historical and affective possibilities out of parallel craft and fine arts practice. “Windsong stays on my mind,” a dream catcher in which one spies the outlines of birds, faces, evil-eyes and popsicle-stick musings is dotted with costume jewelry, rhinestones and false flowers. “You will live each day in Springtime,” an elongated papier-mache figure, one of two finished in creamy silver and pearly gray lusters, spins on a potter’s wheel as on a music box; the sound of whistles and chimes fill the room. The effect is almost ridiculous, but tempered by a meditative, celestial, calm. A full-length painted backdrop frames the second figure, which (headless) floats away into colorful ribbons painted on the wall. These are blissful installations, complicated by an almost sinister repetition and basic formality. The works formally reference their own history at the nexus of art and craft, recalling the decorative naturalism of Secessionist painting, and a number of stylistic tendencies in the fin-de-siecle applied arts. Schwartz enjoys a “pre-art-school” sensibility, citing handy-craft and its “summer camp” associations as deeply engrained in the work. This de-skilling iterates sumptuously. Perhaps this is why, while carefully executed, Schwartz’ sculptures evoke a carefreeness, indeed an almost summery lackaday. (Collin Pressler)