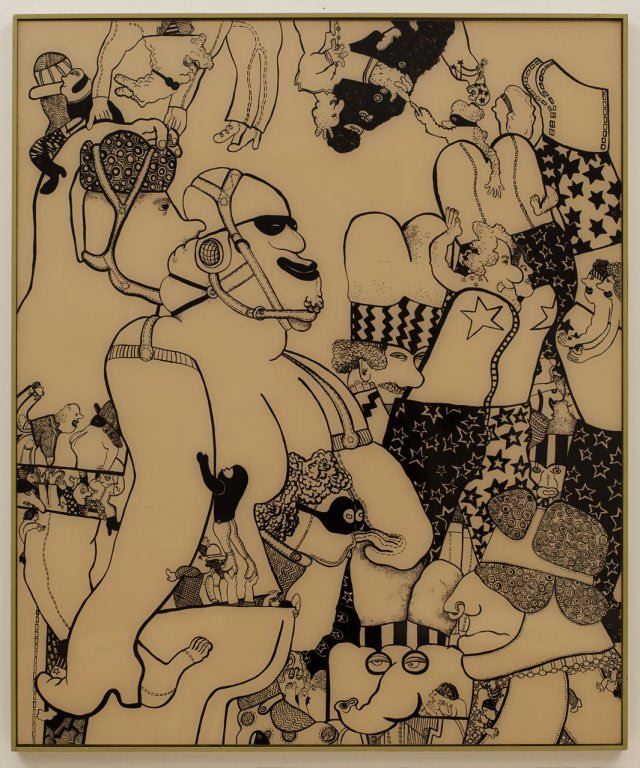 The Art Institute of Chicago’s recently acquired painting “The Trogens” by Imagist Gladys Nilsson has been put on view in the museum’s Modern Wing. While Nilsson has been previously represented in the Institute’s permanent collection with thirteen prints and six other works on paper, this 1967 acrylic painting on Plexiglas is a key addition not only for its use of painting on the reverse side of the acrylic sheet—an oft-employed painting method among the Imagists—but also for its inclusion in one of the founding “Hairy Who?” exhibitions at the Hyde Park Art Center, where Nilsson and her husband Jim Nutt had been teaching art classes. The work was a gift to the museum last year from the artist herself in memory of Whitney Halstead, an art historian who helped promote the Hairy Who artists.

I had the pleasure of corresponding with Nilsson about “The Trogens,” Halstead and the ideas that are triggered by her fanciful, crowded painting. She explained how Halstead, who had been an influential art professor for her and her husband when they attended the School of the Art Institute of Chicago, had acquired “The Trogens” from the HPAC exhibition in 1967. When he passed away in 1979, his will conditioned that artworks in his collection should be returned to their makers if they were still living, and so the painting came back to Nilsson, who in turn offered it to the AIC as a reflection of the important roles Halstead and the museum played in her artistic development. “The thought of looking beyond traditional Western art was not practiced widely,” she says. Halstead “encouraged one to look at everything, no matter what it was, even if vernacular art from the streets. This opened up all our minds to endless possibilities, and was very exciting.”

This dense play of sources is evident in “The Trogens,” a lively circus of differently scaled and eccentrically patterned figures climbing and weaving among larger, ambiguously biomorphic forms. Lumpy hills read as bustiers and derrières, flirting with bodily symbols that would have been particularly charged in the sexual revolution that was taking place at the time Nilsson made the painting. She writes, “I grew up in an environment of ‘boys do this and girls do that’ sort of thing, so quite often it would tickle my fancy to muck about with these ‘assigned role’ thoughts.” Indeed, from “The Trogens” it would seem that behind every spangled Wonder Woman is a cadre of masked bandits and monsters. Gender and other characterizing traits are treated as clear constructions, troubled by a motley cast of characters who might be interpreted as Nilsson and her band of Imagist cohorts. (Matt Morris)