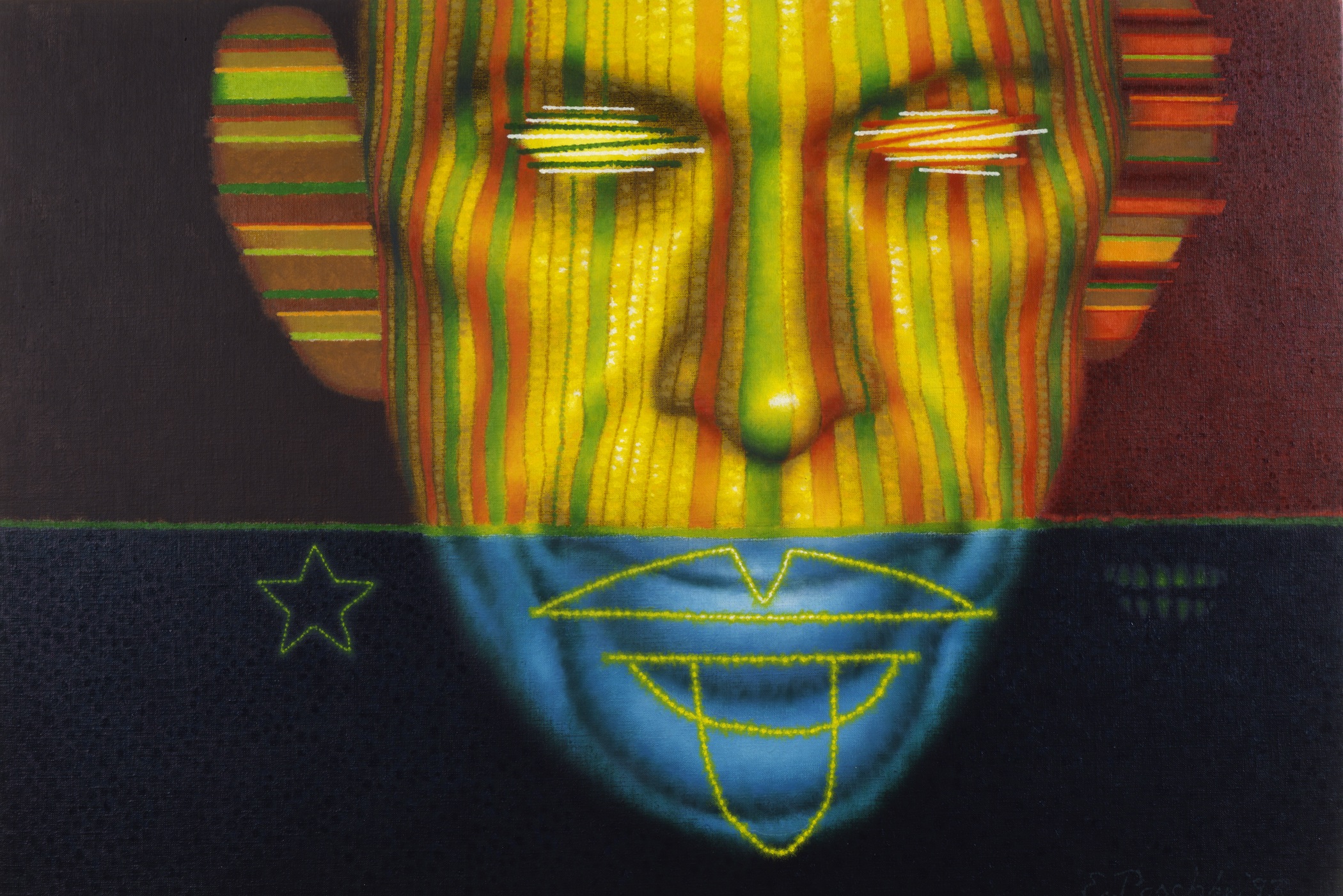 Ed Paschke died the year I moved to Chicago. I had to take it for granted that Paschke was the most famous artist that Chicago had ever produced, and to boot, its best. This must be what it feels like to be born post-9/11. You hear about it a whole lot but you never really know the experience. The opening of the Ed Paschke Art Center this month, almost a decade after his death, is a good moment to reassess Paschke’s artwork. How does it hold up? Is it still important art?

You hardly ever get the chance to see so many of Paschke’s artworks in one go than at the new center. With about forty artworks on view, and a re-creation of his painting studio as he left it in 2004, the opportunity to get acquainted, or reacquainted, with Paschke is unparalleled. In fact, I had a late epiphany; oh my god, I thought, Paschke was a great artist. Previously, I only somewhat enjoyed his paintings. After spending time with the works at the center, I began to understand why he was king of the art scene. Not only was he a popular mentor to artists—“generous” is the word often used—his paintings are intense, meaningful and productively difficult. (For a good account of how the museum is funded, see this Crain’s article from earlier this month.) 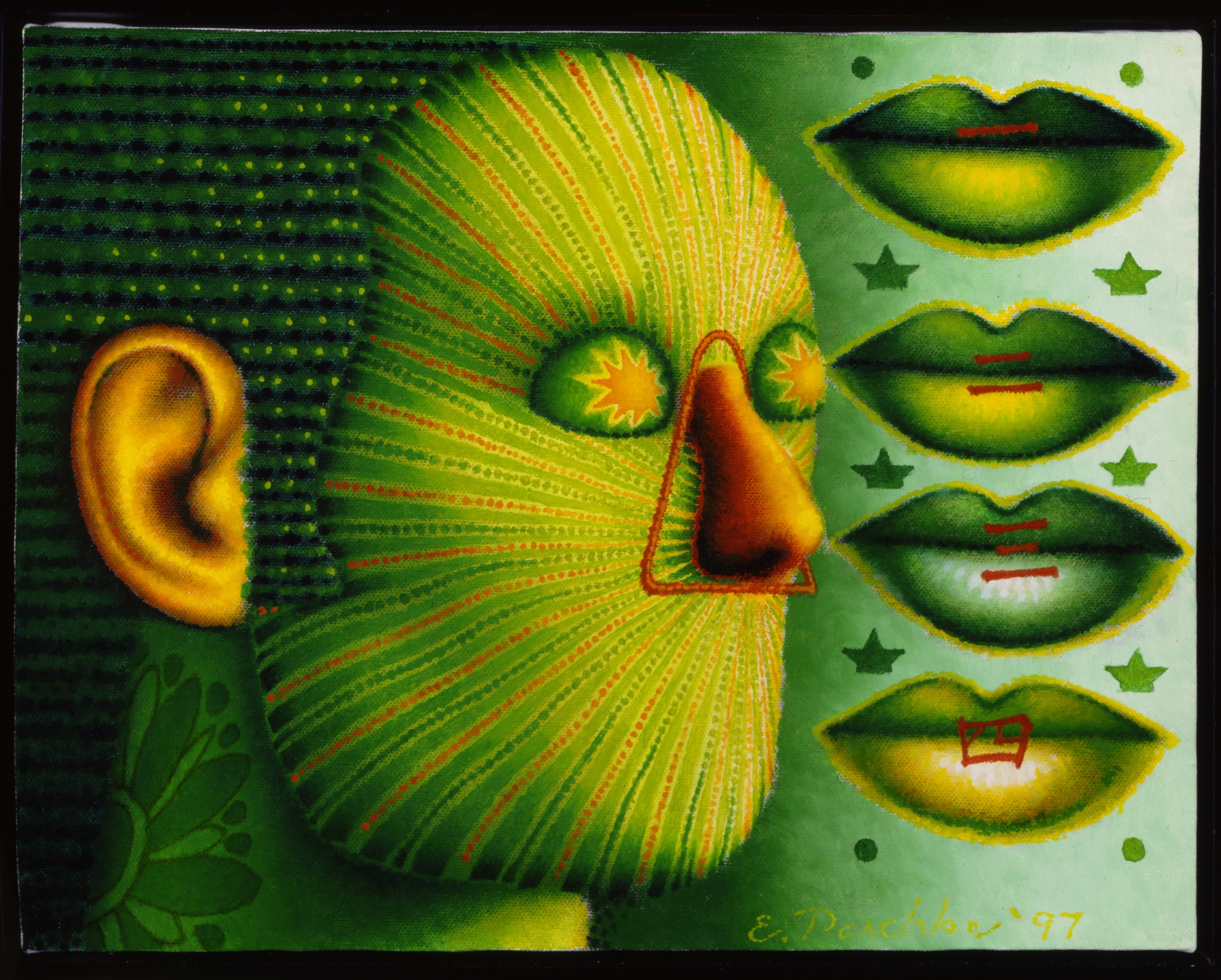 Paschke was a skilled painter; get real close to the canvases and they testify. But it’s Paschke’s painted subjects that really speak across the chasm of time. They presage the current version of Americana, a digital culture and its techno-hued swamp of regurgitated images and ideas. He was Chicago’s Warhol, and like him Paschke found both anxiety and awe in the ways of we communicate, like ads, signs and symbols. Both Warhol and Paschke dabbled in similar subject matter over the years: lady’s shoes, pop icons, portraits and criminals.

Photojournalism, or stylized factual photography, provided a fertile channel of imagery for Paschke. These were sources of profound disturbance and pleasure. But, unlike Warhol, Paschke painted figures and faces almost exclusively. Faces in the news, public faces, cliché faces, faces that thrill and faces that frighten. Their orifices and ears were, at turns, delicately depicted or abstracted into plump, anonymous holes. By the 1970s, Paschke had painted so many faces that he invented his own character typology. Ghouls, their featureless faces were painted acid green and glowing. The animated masks are expressive but empty shells of people. They walk among us.

Paschke’s art is not always easy to enjoy—deliberately so. Like the American culture that it mimics, the art seeks pleasure in disguise of the disgusting. The work is biting, its colors noxious, its surfaces too perfect, its provocations of “the other” too amusing. These are people who use their bodies to entertain, from wrestlers to prostitutes. Shouldn’t we feel more empathy? Are you supposed to feel so uncomfortable? Yes, and yes. I think so.

The inaugural exhibition is not arranged chronologically. Co-curated by Paschke’s son and daughter, who run his foundation, the show spans Paschke’s entire, long career, although it favors the artist’s late period. Spend enough time bouncing among its dozens of artworks and you enter Paschke’s neon universe, and the freaks begin to feel benign, as if to say that difference finds a happy home in the art world.

And then there’s the Buddha and Osama bin Laden and a Native American man in a headdress. All are contested representations of so-called foreign identities stolen by the U.S.A.’s corporate media machine, and turned into stereotypes of themselves. Paschke seemed to enjoy a challenge, whether it be subject matter or technique. For instance, the 2003 painting “With God on our Side,” which features Osama half-smiling from behind a screen of patterning, reveals the proud grotesque that Paschke loved to seduce and capture.

The best test of Paschke’s enduring influence is locating it in the art of contemporary working artists. There’s a big dose of Paschke’s masks and performers and painted gradients in Edra Soto’s work, for instance. The hand-painted patterns I see carried into Judy Ledgerwood’s art. Rachel Niffenegger, too, has picked up on Paschke’s frightful masked characters. And it’s great to see Paschke haunting the hypnotic clip-art videos of Thorne Brandt and Jon Cates. Even Chicago’s brand of artistic mentorship seems invented by Paschke, and extended through the practice of his former student Michelle Grabner. Says Tony Fitzpatrick, who sounds like he learned a ton from Paschke, “Ed’s work was smarter than anyone gave him credit for when he was alive. His audience has not even been born yet.”

[…] This week, AFC’s Chicago correspondent Robin Dluzen reported from the new Ed Paschke Center, for one of Chicago’s most revered artists. Newcity’s Jason Foumberg asks whether Paschke is still relevant; he seems to think yes, more than ever. [Newcity Art] […]