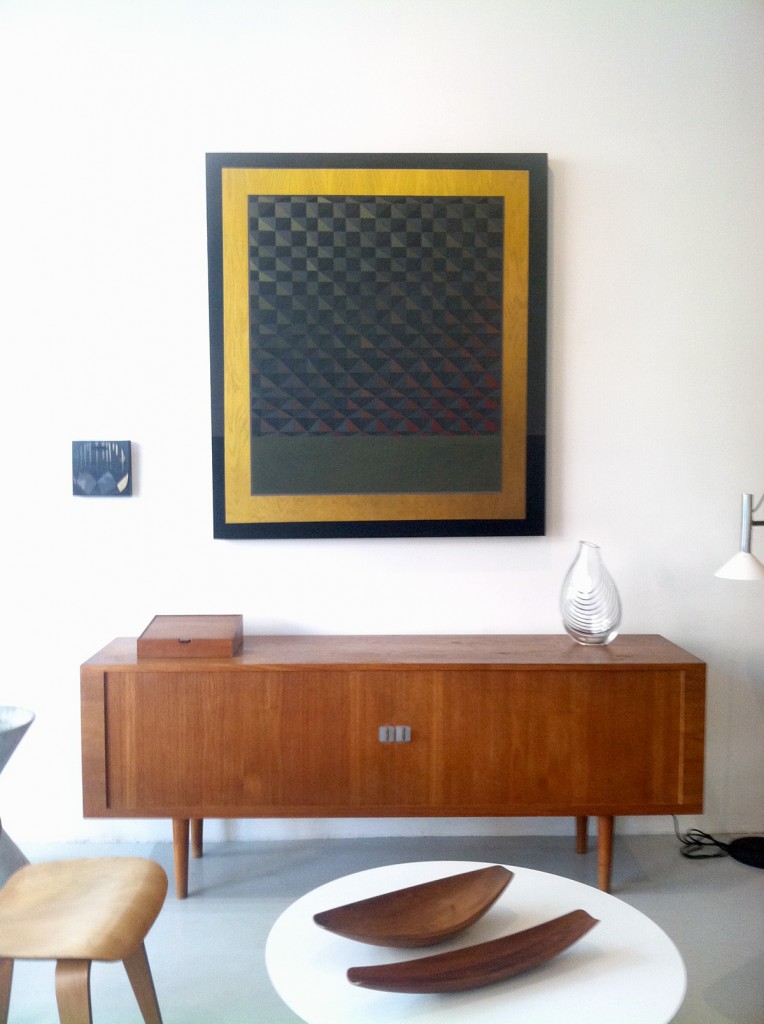 Centered: Allison Reimus. “Yellow Rectangle,” acrylic on wood, 2012. Hung above a teak sideboard by Hans Wegner for Ry Mobler Denmark, with other furnishings by Charles and Ray Eames, Eero Sarrinen and Jens Quistgaard.

Earlier this week, Peanut Gallery, an exhibition space and art studio collective located in Humboldt Park announced that its lease would not be renewed in October. Peanut is one of several businesses at the corner of California Avenue and Augusta Boulevard that will be closing or relocating to make way for new developments being planned by landlord Gio Battaglia. Peanut Gallery co-owners Charlie Megna and Kelly Reaves took to the space’s Facebook page with a public explanation of their situation and future plans, “We ARE NOT CLOSING, just want to make that clear. But we are going to have to move come October and we may be taking some time off during the winter to figure out our game plan.  We will still be active in the arts community and will continue on.” In advance of shuttering their current location, several exhibitions are scheduled: opening July 13, “Ugly Smile” is a group show curated by Mike Rea and Geoffrey Todd Smith, then opening in August will be an exhibition of work by David Krofta. Peanut Gallery, 1000 North California.

Earlier this month, 4th Ward Project Space was opened by three SAIC graduates, Mika Horibuchi, James Kao and Valentina Zamfirescu. As the gallery’s name suggests, it is located in Chicago’s Fourth Ward—Hyde Park, in other words. 4WPS is a decidedly non-commercial venture with goals toward creating more opportunities for artists to explore their practices without the pressures of the marketplace. When reached for comment, Kao spoke to their motivations in starting an alternative gallery, “We understand the importance of community for artists, but we also understand how the attendant privileges of wealth, whiteness and patriarchy often steer the art community away from what matters most—namely, excellent art. 4WPS aims to provide a platform for artists who may be underrepresented or typically overseen to create and exhibit works that provoke critical discourse rather than monetary gain.” Their current exhibition of video installation by Greyson Hong is on view until July 4. 4WPS, 5338 South Kimbark.

Gallerista, self-described as “1/3 online gallery, 1/3 public programming and 1/3 PR and marketing for independent artists,” has teamed up with modern furniture showroom Circa Modern in Ukrainian Village for a new bi-monthly exhibition series called “SOLO @ CIRCA.” The artists invited to exhibit are selected from those who have profiles on the web-based platform that Gallerista hosts. Paintings by their first featured artist, Allison Reimus, will be on view through August 17. Circa co-owner Don Schmaltz previously ran Dupreau Gallery from 1997 through 2003, and was looking for a collaborator who could build an exhibition program for his furniture and furnishings store. In an email follow up, director and founder of Gallerista Joshua Herrington described the aesthetic experiment of presenting contemporary artists in the context of design pieces with considerable history: “The risk of placing artwork next to ‘commodities’ is one we were all nervous but also excited about. Because Gallerista is not a traditional gallery and Circa Modern is not either, we put to rest early fears that it just might not work. The pieces at Circa Modern are ‘classics’ because they sing on their own, singularly. And after all, this is how we live with art as objects in the end—in our home, mixed in with bits of life from other eras and sentiments we’ve collected through the years.” Circa Modern, 1114 North Ashland.

Regards Gallery, a commercial gallery venture by wife-and-husband Natalie Popovic Schuh and Mike Schuh, opens next month in Ukrainian Village. After a number of years working in galleries and museums in St. Louis, Los Angeles and Chicago, the couple have put together an exhibition program that is built from years of relationships with artist’s practices they have supported and watched develop. Their first exhibition, “MURMURS,” opens July 11, and features work by eight artists. Starting in the fall, Regards will be host to a series of solo exhibitions by artists Megan Greene, Aline Cautis and Nick Bastis. Regards Gallery, 2216 West Chicago. (Matt Morris)