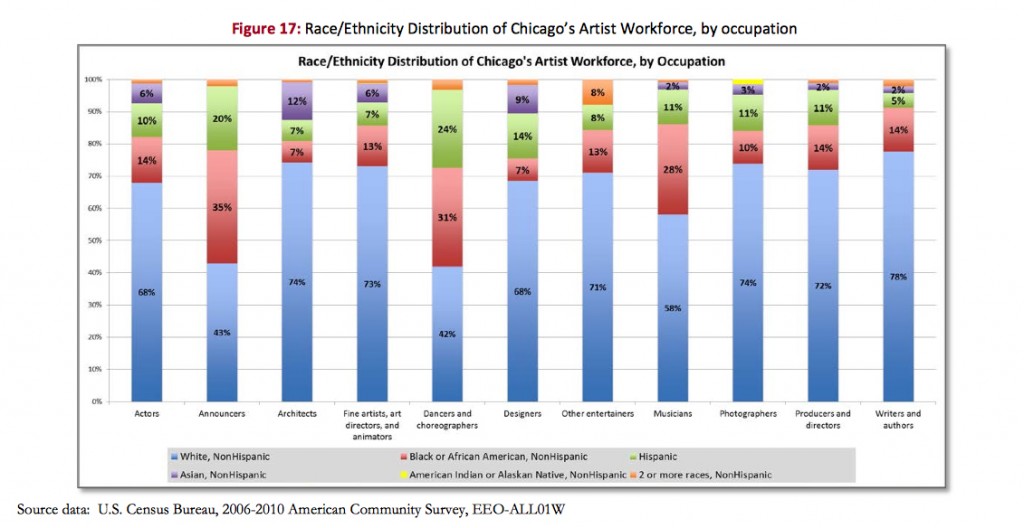 Three new studies have been published this summer by the Cultural Policy Center that gather data on Chicago and a number of peer cities. The first measures Chicago’s artistically creative economy, the second accounts for retention of Chicago’s arts students as residents beyond graduation, and the third is a comparative analysis of public funding for art in Chicago and twelve other cities in the U.S. from 2002–2012. At first blush, the studies’ findings might appear disheartening: low percentages of racial diversity among Chicago creative workers, comparatively lower rates of arts students finding arts-related work after graduation, and funding levels through Chicago’s Department of Cultural Affairs and Special Events (DCASE) are the lowest among comparable agencies in the other cities and regions in the CPC’s study.

But principle analyst and author of all three studies Jennifer Novak-Leonard contextualizes the specifics of their data with the significance and impact of being able to offer hard data on a field that isn’t as easy to quantify as many others. She comments by email, “Sound data on arts and culture is not as readily collected or made available as in other fields; at the CPC, one of our priorities is to improve the state of data on arts and culture. Increasingly, those who work in the arts and culture field are being called upon to talk about, explain and justify what they do in a more empirically based, evaluative and reflective manner.” The CPC, continues Novak-Leonard, supports “culture fields by providing objective, high-quality, scientifically robust data and studies on timely issues important for those working in the arts and cultural fields.”

While conclusions drawn from the studies reveal numerous areas that could be improved, Chicago nonetheless distinguishes itself with 1.6 times the national baseline of artists working in the city—an estimated 63,008 at the time the study was published in May. There is a greater concentration of writers and architects in Chicago than anywhere else in the U.S. Chicago is second only to New York in its retention of out-of-state art students who take up residence after school. And while DCASE’s overall funding is low, it distributes the highest number of total grants a year compared to the twelve peer regions.

The Cultural Policy Center is the joint program of the University of Chicago’s Harris School of Public Policy and the independent research organization NORC at the University of Chicago. Novak-Leonard explained that the topics of research for these three studies were inspired by the 2012 Chicago Cultural Plan. She says, “Our overarching goals in conducting the studies were to provide a robust empirical basis for understanding Chicago’s artistic and cultural vitality and vibrancy and to provide objective benchmarks for Chicago to see how it currently compares with other cities and regions.” All three studies (with convenient “quick facts” at their beginning) can be found here. Beyond these three studies, the CPC is currently mounting a statewide survey to define and quantify art participation in California (though based in the University of Chicago, not all of their studies are specific to this region). Also in the works are a series of discussions with Chicago-area arts and culture stakeholders with the goal of a public, prioritized research agenda for future studies in the city. (Matt Morris)