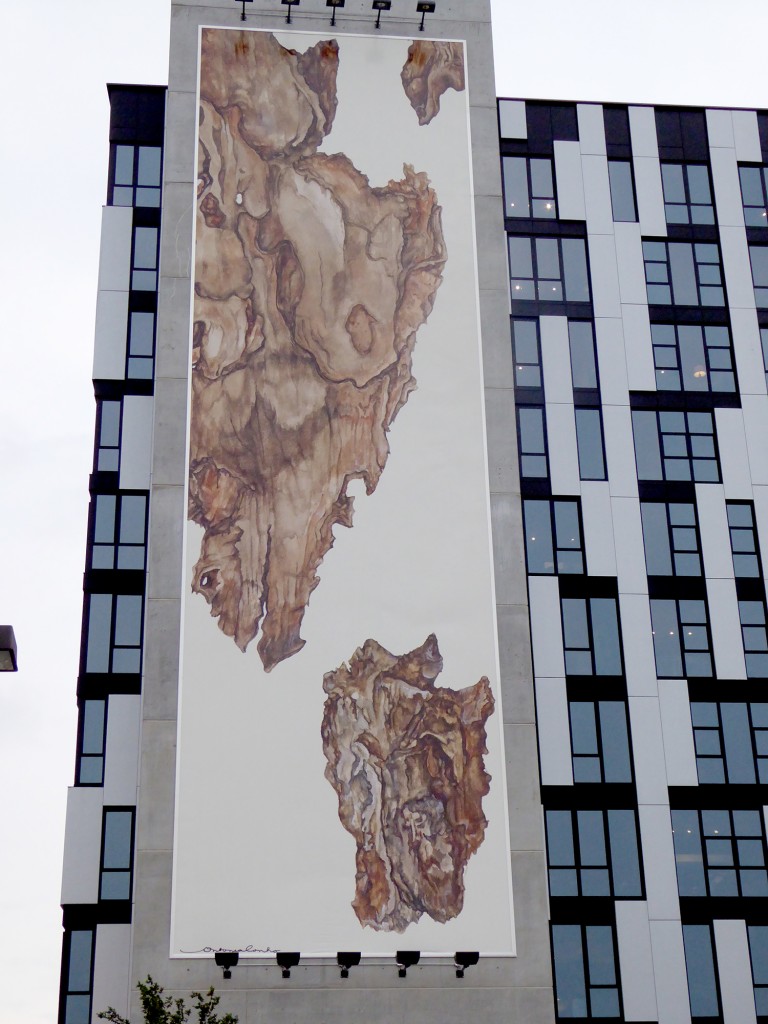 Last night was the official unveiling of Antonia Contro’s artwork “Scorza” on the façade of the 1611 West Division condo building at the corner of Division and Ashland. The ninety-two-foot-tall, twenty-seven-foot-wide digital print is the first “art wall” sponsored by Intelligentsia coffee bar, which will be opening a new location in the building on July 17.

In a phone conversation this morning, Intelligentsia’s director of communications Stephen Morrissey described the company’s long-held commitment to community with particular emphasis on art. Not only have their other locations played host to café art installations on rotating exhibition schedules, but they have previously partnered with Chicago organizations like the residency program ACRE, the Chicago Artists Coalition and Mana Contemporary with donated coffee and coffee bars. Morrissey sees this new public art program as the next big step in the ways their company supports the arts.

Currently the plan is to rotate the exhibition space on the exterior of the building designed by Wheeler Kearns Architects once a year. The logistics for selecting artists and the specific works to address this soaring street corner display space are still yet to be determined, Morrissey admits. They are considering ways that committees and contests might be implemented, but “most of all we’ll look to our customers for ideas on how to do this well moving forward. We always want to show art that will be a complement to the street and neighborhood.”

Morrissey says that Intelligentsia was aware of Contro’s art through her work as executive director of Marwen, an organization that provides free visual art classes to underserved Chicago youth. They approached her about commissioning the work earlier this year. The resultant “Scorza” is a digital enlargement of a small watercolor study of tree bark, thinking of this work as a skin for the building. In the artist’s statement about “Scorza” on her website she explains, “I aimed to create a contrast between the geometry of the building and organic form; between man made and natural. I wanted my work to provide a counterpoint to this highly trafficked urban intersection, and to respond to the architectural design of the building.” Contro’s original watercolor work will be on display inside Intelligentsia’s new coffee bar. (Matt Morris)