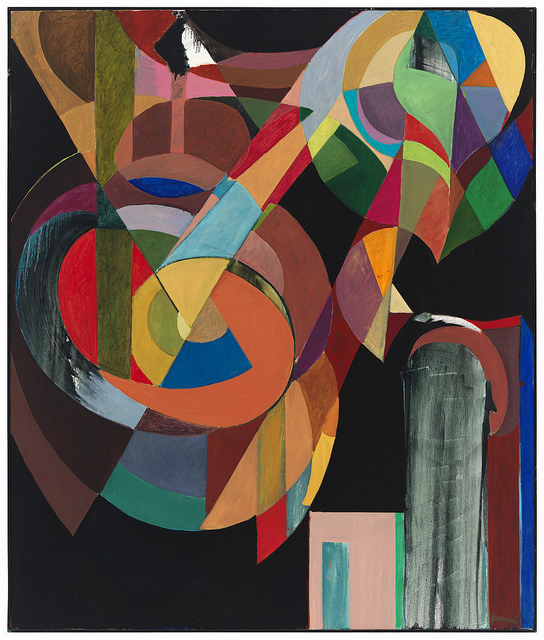 Morris Barazani’s kaleidoscopic painting retrospective at the Ukrainian Institute of Modern Art reveals an individual acutely sensitive to new artistic directions. Spanning the past six decades, the thirty-one selections on view run the gamut from raucous painterly surfaces to nuanced forays into collage and color-field abstraction. In an age where stylistic homogenization is a prerequisite for mainstream success, it’s clear from the outset that the persistent theme of Barazani’s career is openness to change.

Like a lot of young artists in the forties and fifties, Barazani confronted the titans of abstraction head on, synthesizing influences and finding his own way in the process. The earliest works in the show, such as the watery gray biomorphic “Pt. 104,” simultaneously echo approaches adopted by Miro, Gorky and Klee without looking too much like any of them.

Throughout the sixties, seventies and eighties, Barazani’s tack is chameleon-like; one moment bold and gestural (“Medium Surrounding Change”), the next calm and serene (“In the shadow of The Past”) and often doubling back again. By the late 1990s the rapid shifts in course give way to more concentrated investigations; ultimately coalescing into the vividly colored, but softly scumbled surfaces that characterize mature geometric compositions such as “Hearing the Right Beat.”

The show also includes a fine selection of Barazani’s intimate collages. Mostly dating from the 1970s, works such as the mixed-media “Untitled (Outcome)” have a gritty, urban quality absent from the majority of his paintings on view. The collages’ rough-hewn feel deliver emotional depth to an exhibition that’s otherwise light and joyous—one of the highlights of the whole show.

“Shoots Straight” is nothing less than an impassioned sermon on postwar American art delivered from the brush of an abstract painter living in a city that historically never cared much about abstraction. Times have certainly changed, and Morris Barazani has never been afraid of changing with them. (Alan Pocaro)

Through July 27 at the Ukrainian Institute of Modern Art, 2320 West Chicago.