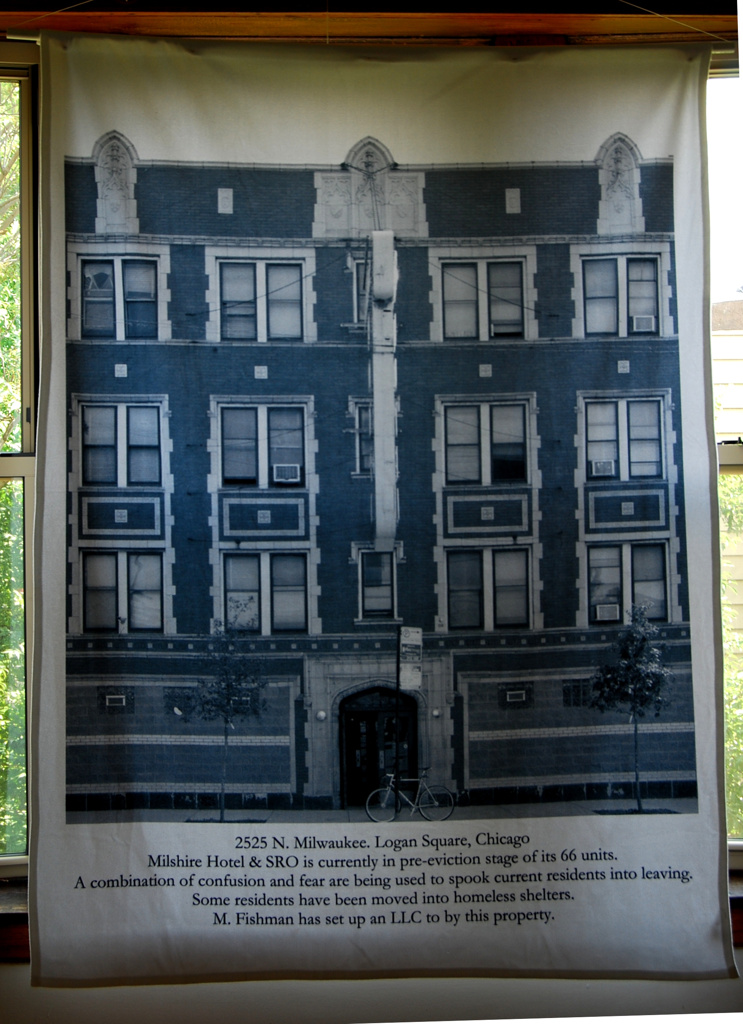 This year’s Milwaukee Avenue Arts Festival (MAAF) became a site for controversy when Amie Sell’s site-specific installation dealing with affordable housing and displacement through neighborhood development was taken down without the artist’s consent the day the show was meant to open. In a thorough account on Sell’s website, she states that it was Mark Fishman, a real estate developer who owns the building in which her work was to be shown, who was responsible for shutting down the exhibition. Fishman is directly criticized in “Home Sweet Home,” the ongoing project Sell intended to exhibit, and also sits on the I Am Logan Square board, the nonprofit organization that sponsors MAAF along with other cultural events and career development opportunities for artists.

Mark Fishman’s office declined to comment, and at the time of publication I Am Logan Square had not answered Newcity’s requests for response. In an article that was posted Monday evening on DNAinfo Chicago, president of I Am Logan Square Geary Yonker says that their organization continued to support Sell’s exhibition, and that blame for the work’s removal lies with M. Fishman and Co. “We refused to take it down. It’s the official stance of the fest that we were not going to take it down,” Yonker said. “The important distinction that I was trying to make sure was clear here, and to Amie, was that we supported her and her right to show her piece and it was taken down by the property owner.”

Sell’s “Home Sweet Home” project consists of altered home furnishings and fleece blankets printed with photographs that she has made of buildings in Logan Square that have been bought up for renovation resulting in the evictions and displacements of current tenants. To the community’s credit, Sell has been offered several opportunities to install the works to be on public view elsewhere. She will be meeting with spaces and curators this weekend to solidify future exhibition plans for this body of work. (Matt Morris)