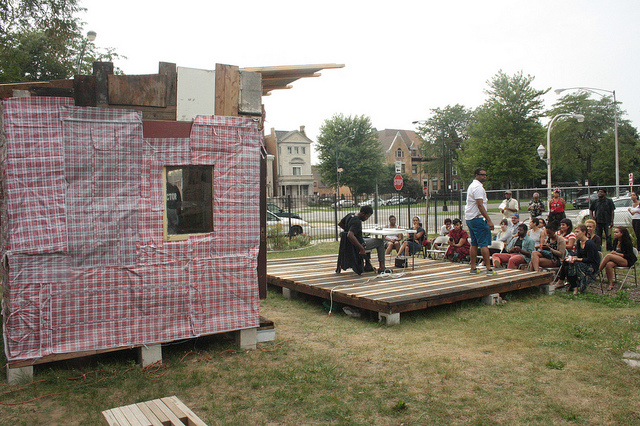 In a letter from Sixty Inches From Center’s executive director Tempestt Hazel, she admits that the nonprofit online arts magazine “has been pretty quiet since 2014 began.” But now they’ve launched a new website, announced their new home at the Zhou B Art Center in Bridgeport and embarked on the next chapter in their online magazine that shifts from the weekly publication of the last three years to a triannual format that builds content around selected themes with organized workshops, panel discussions and other events that aim to get at the tangible realities of art and its producers in Chicago.

Their first issue in this new format is titled “MARGINS,” reiterating the organization’s goals of calling attention to artistic practices that thrive outside central, mainstream cultural institutions and encourage art audiences beyond the art-world initiated. If you’ve wondered what the backstory and significance of the large, partially submerged Buddha heads that have been appearing around town for the past couple of years, check out Kwame Shorter’s in-depth interview with artist Indira Johnson. Caitlin Bruce offers a firsthand account of Urban Acrobatics, a project she organized with the New York-based Polly Solomon that blends the historic and aesthetic affinities between contemporary circus performance and graffiti.

As editors Reuben Westmaas and Toby zur Loye explain in their letter that introduces the “MARGINS” issue, the public events and programming that will coincide with these issues “aren’t just for artists, though: they’re for everybody whose lives intersect with the arts. In other words, they’re for everybody.” Their next event at the Zhou B Art Center is a panel called “Writing in the Margins—Who Do You Write For?” on July 17, 6pm-8pm, which will be moderated by Westmaas and includes panelists Sophia Nahli Allison (visual journalist and media arts educator), Felicia Holman (co-founder and communications director of Honey Pot Performance), Jenny Lam (artist, writer and independent curator), Olivia Cole (poet, author and activist) and Diana Pando (writer). Next month Sixty will host a workshop called “Effective Approaches to Working Across Communities” on Sunday, August 10, from 1pm-3pm at Zhou B’s Centerline Café. Hazel says this event will bring in “people who have been thoughtful and smart about how they work with what some people may perceive as difficult communities. We’re talking to artists and organizers who work in prisons, detention centers, Chicago public schools and cross-culturally.” (Matt Morris)