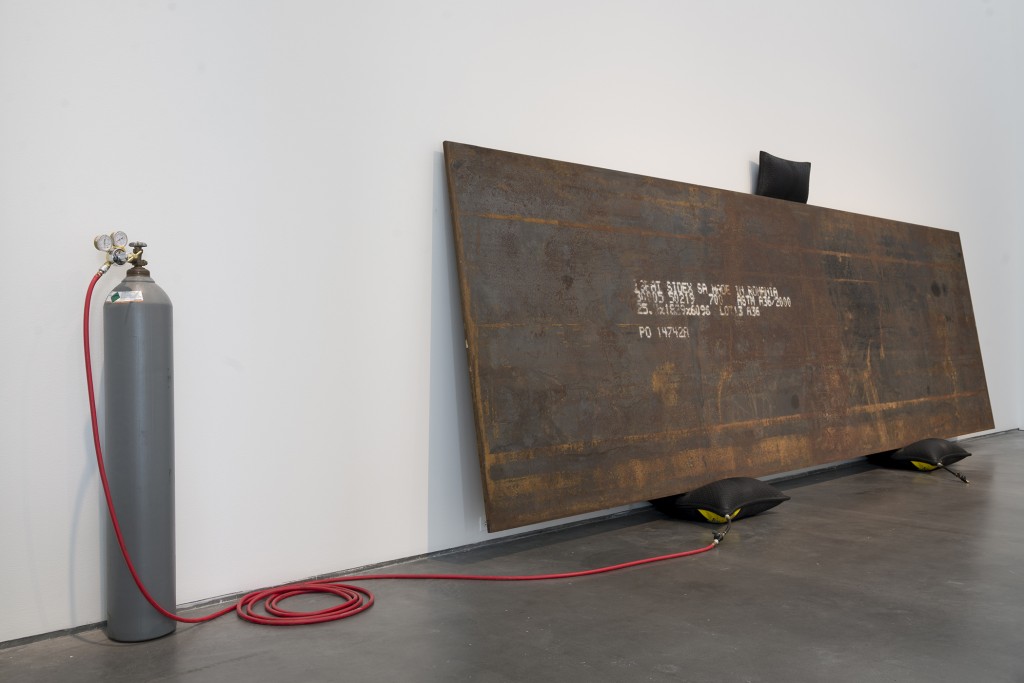 In “Metamorphology,” British artist Simon Starling’s survey of photographs, installations and film, you do not mind having to read the accompanying wall texts—you actually look forward to it. This is a testament to the intrinsic inveiglement of Starling’s explorations of the titular phenomena; rarely does work so heavily dependent upon exposition avoid coming off as pedagogic so finely as Starling does here. Not all of the pieces on display fully require an avaricious lust for knowledge to draw the eye—bolting a fucking Fiat to the wall will do that on its own—but every one is the better for it. That aforementioned Fiat, while certainly arresting from a purely aesthetic point of view, takes on new meaning upon discovering that this particular model was driven from where it was produced in Turin to Fiat’s present site of manufacturing in Poland, where Starling swapped out some of the original, Turinese carmine pieces for Polish white, the end result resembling the Polish flag mounted high on the MCA’s atrium wall. The slide presentation that documents Starling’s suicidal steaming of Loch Long, during which he fed his little boat with wood chopped from its own hull, takes on shades of the mythological: the title, “Autoxylopyrocycloboros,” contains reference to Ouroboros, the alchemical sigil of the serpent devouring its own tail. Starling’s metamorphoses span gulfs political, geological and even cosmological. “Bird in Space,” (2004) named for the famed Constantin Brancusi sculpture first displayed at the Arts Club of Chicago (where another Starling exhibition runs concurrently; he’s like a spider) manages to be a commentary on tariffs in two different eras. Starling’s “Bird,” an enormous propped steel plate, lacks the elegance of Brancusi’s, instead relying upon raw, unyielding spatial dominance and the quiet strength of industrial airbags to achieve the listing, barely borne heft of the bureaucracy it suffered under. Vaguely enjoyable on its own merits, the mini-disquisition elevates the piece to Art. Metamorphosis is among the most complex processes in nature, society or esotericism, and Starling gives the enterprise its due, perhaps most impressively in turning wall text into context. (B. David Zarley)

Through November 2 at the Museum of Contemporary Art, 220 East Chicago.