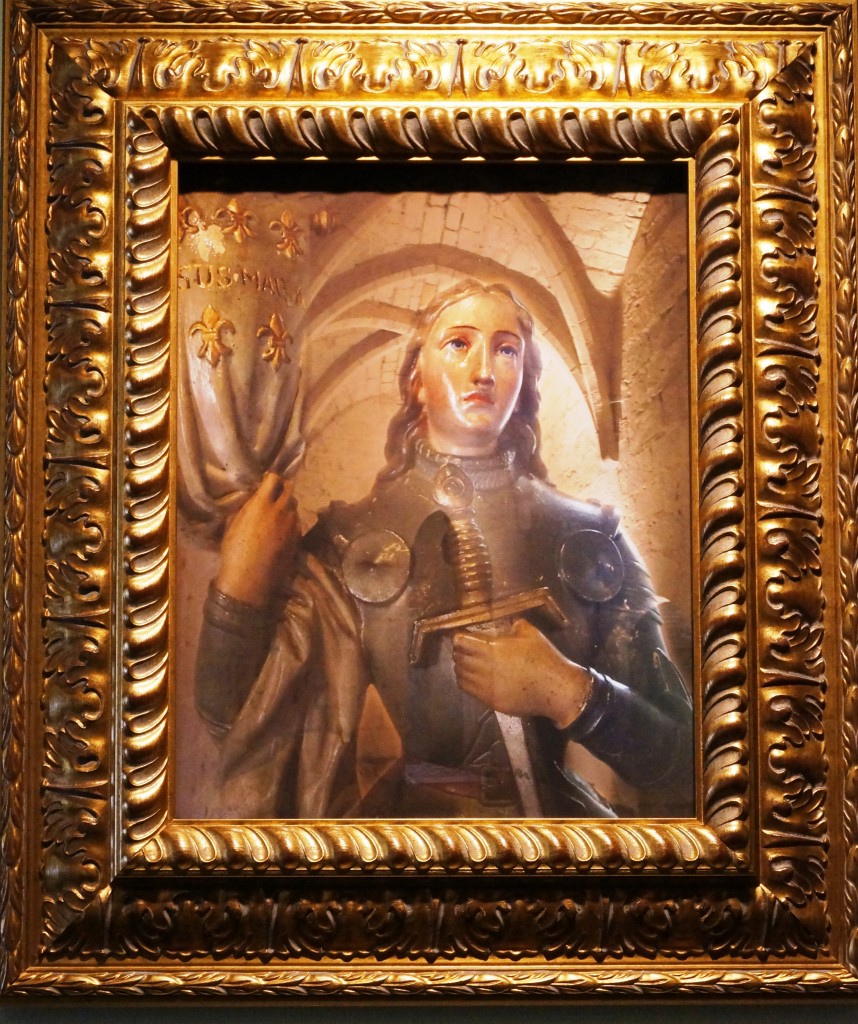 Joan of Arc. Who was Joan of Arc, the teenage Christian visionary who led armies against the English invaders of France in the fifteenth century, and was killed by them at the age of nineteen in 1431? There are no images of her from the time she lived, but there are statues and figurines representing her made over the succeeding centuries. In a photographic quest driven by a sense of connection to the remarkable heroine, Susan Aurinko has sought out those objects and shot them as portraits, each one expressing a different mood, but all of them unified by what Tammy Kohl, who has enriched the exhibit by her jewelry referencing Joan’s time, calls “strength.” Aurinko communicates that strength by shooting the representations of Joan’s face, which always has an iron determination, whether she is meditative and pensive, prayerful, stoical or even innocent. The photographic works take on a uniform sensibility by the digital move of putting the straight shots of Joan’s image into backgrounds from the places where she stayed in her war of liberation and through emphasizing the bronze and burnished tonality of the original shots. In the image that conveys the greatest strength, we see Joan in a chapel holding a sword, her lips grimly pursed with fierce determination and her eyes wide open, ready to do battle. Aurinko is one of Chicago’s most important photographers and here she has produced her masterwork. She has studied Joan’s life deeply and intensively, has traveled to the places where she lived, and has lived imaginatively as a visual method actor. The images are infused by the “admiration, reverence, and gratitude” that Aurinko feels toward Joan, a great figure of female power and righteousness. Joan, according to Aurinko, would not waver or concede, and always “held her ground.” She is Aurinko’s model and her images are deeply effective in showing why. (Michael Weinstein)