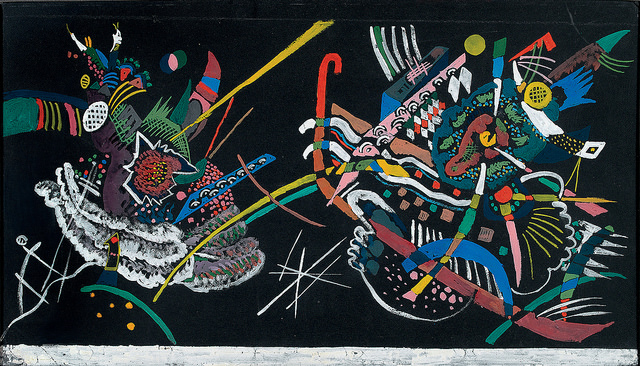 The Centre Pompidou’s Kandinsky collection, currently in Milwaukee, offers a rare opportunity to see work that both precedes and follows the painter’s Blaue Reiter period (1911-1914) that is so well represented at the Art Institute of Chicago. But limited as it is to pieces that the Kandinsky family could not or would not sell, it’s not the kind of retrospective that assembles the best art.

Nevertheless, the quality of his early landscapes is surprising. Kandinsky was sensitive to the textures of paint and his colors were already well tuned. Even when painting a nearly monochrome stretch of sandy beach, his sharp drawing makes the scene snap with excitement.

His Blaue Reiter pieces in this collection, the “Improvisations” of 1909 and 1911, are overwhelmed by the raw excitement of Franz Marc’s “Large Blue Horses,” from 1911, hanging beside them. But if this show had drawn from other collections, Kandinsky’s four ecstatic Campbell panels from MOMA, for example, would have reversed the comparison. 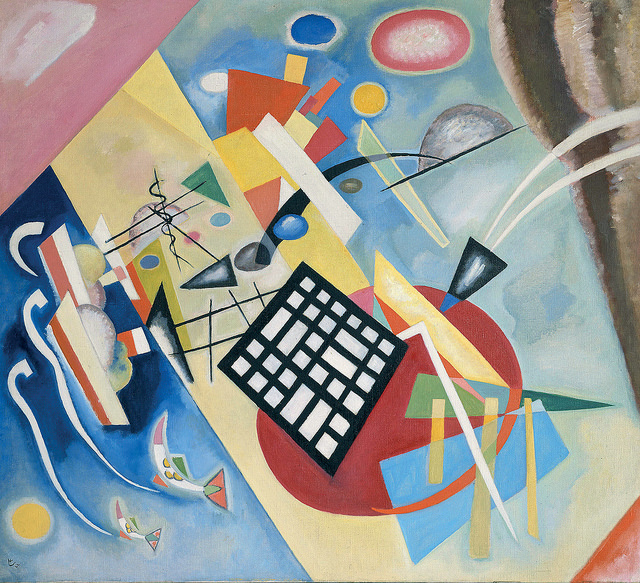 After his earlier achievements, Kandinsky’s postwar painting is disappointing. Where once no canvas seemed large enough to hold his explosive, biotic force, now his forms withdraw into themselves. Eventually they will lie flat upon the canvas, like fanciful crustaceans washed up on a beach after a storm. Was that the result of the ongoing trauma of being chased across Europe by world wars and totalitarian regimes? Was it the re-emergence of his keenly academic mind that had spent ten years in law school and would spend eleven more teaching at the Bauhaus? Or is it just the result of an exhibition that is missing the best pieces? Regardless, it’s still a thrill to see what is on view, since his paintings from those decades are so rarely shown in American museums.

It is especially thrilling to see the full-size re-creation of the “Juryfreie” murals. Originally designed in 1922, they were recreated for the Centre Pompidou in 1977 under the supervision of the artist’s widow. Now that room is in Milwaukee, and it’s more than a little psychedelic. If only his spirit could have stayed that high, inaugurating the new spiritual age he had once proclaimed. (Chris Miller)