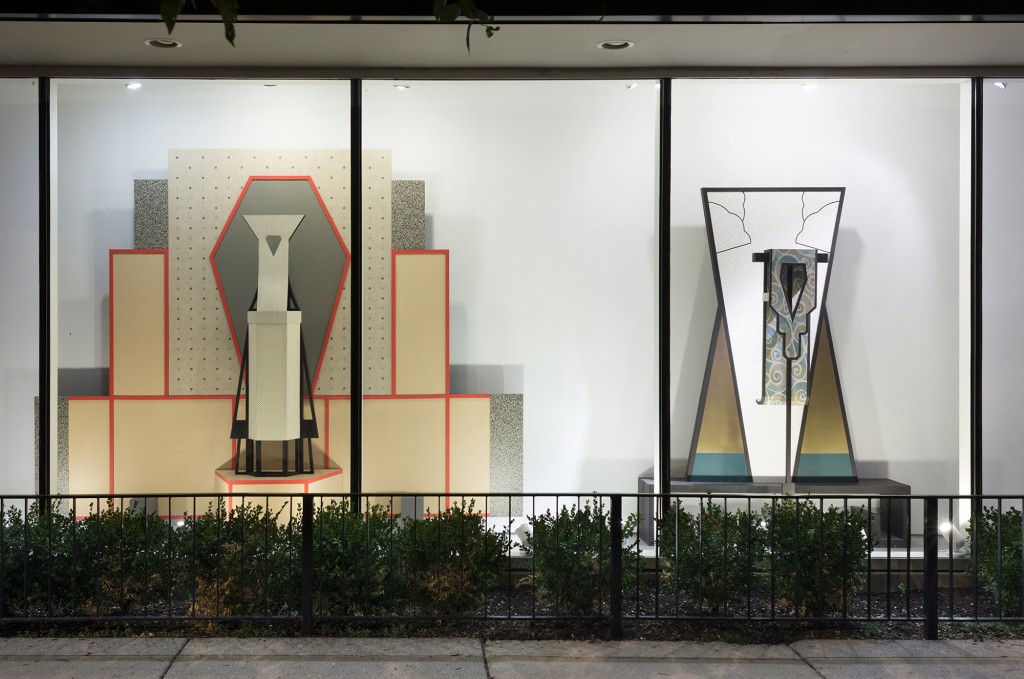 It’s often said around town that Chicago has two seasons: winter and construction. The architectural epicenter where we reside explodes into transformation in the warm months, as buildings, roads and public spaces undergo restructuring. A few exhibitions on view right now conspire to reflect this construction condition by taking built environments and our habitation of them as points of departure. The artworks’ proximity to source materials is a useful measurement in distinguishing where a quirky meta-criticality is achieved, and where sometimes the experience at hand is burdened by its references. 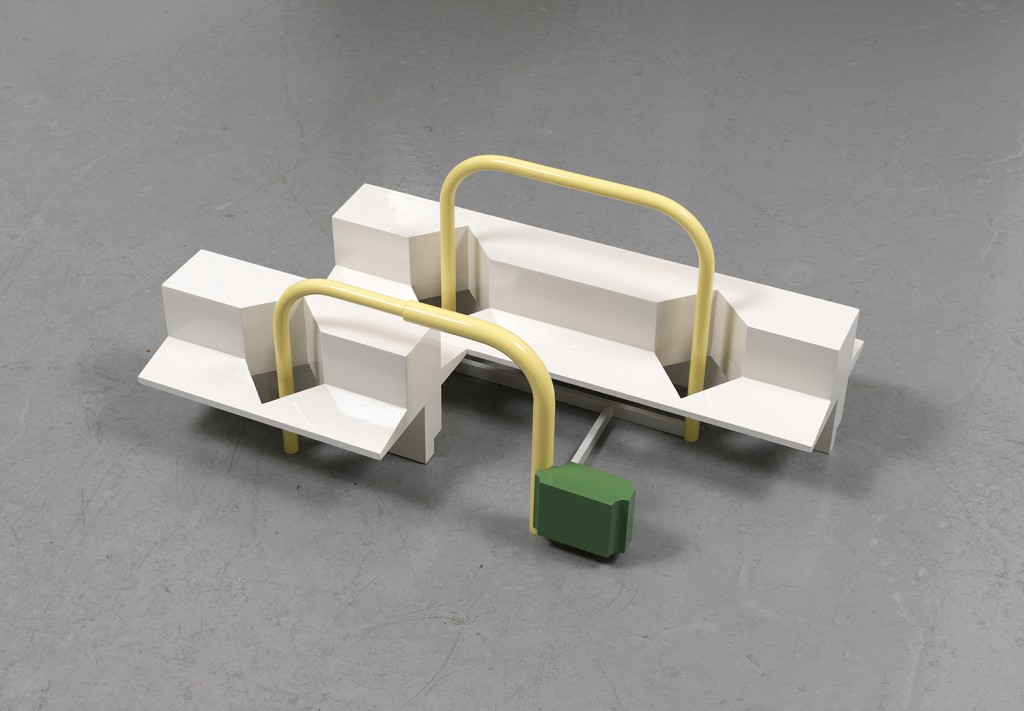 In “Signal” at Rhona Hoffman, Richard Rezac’s stringent formalism is just a little more playful than usual. This exhibition of painted sculptures, accompanied by a suite of severely elegant preparatory drawings, looks like many Rezac has had over the past twenty years, so methodical is his exploration of form in works on the walls, floor and hanging from the ceiling. Convex and concave curvatures, rhombuses and triangles, cast metal and shaped wood: as is typical in his work, these elements are combined into studious meditations on architecture—well-poised objects that condense a poetics of space into modestly sized constructions. This time around though, I search for names to call the works’ components, so reminiscent are they of decorative facades and the workaday tools used to clamp them in place, and yet straightforward categorization proves neither sufficient nor stable here. “Untitled (13-05)” might be a chandelier of repurposed bed knobs and candlesticks. “Untitled (13-07)” is an Anne Truitt on a Bowflex. “Nemaha” is a nickel-plated harlequinade, and its companion drawing a radiant rose and silver study of the diamond pattern across the finished object. That jester gesture recurs in “Untitled (13-06)” when a custard-yellow lattice is plugged with Home Depot-orange polyurethane gems. The oddity of each work undercuts their initial sense of familiarity. 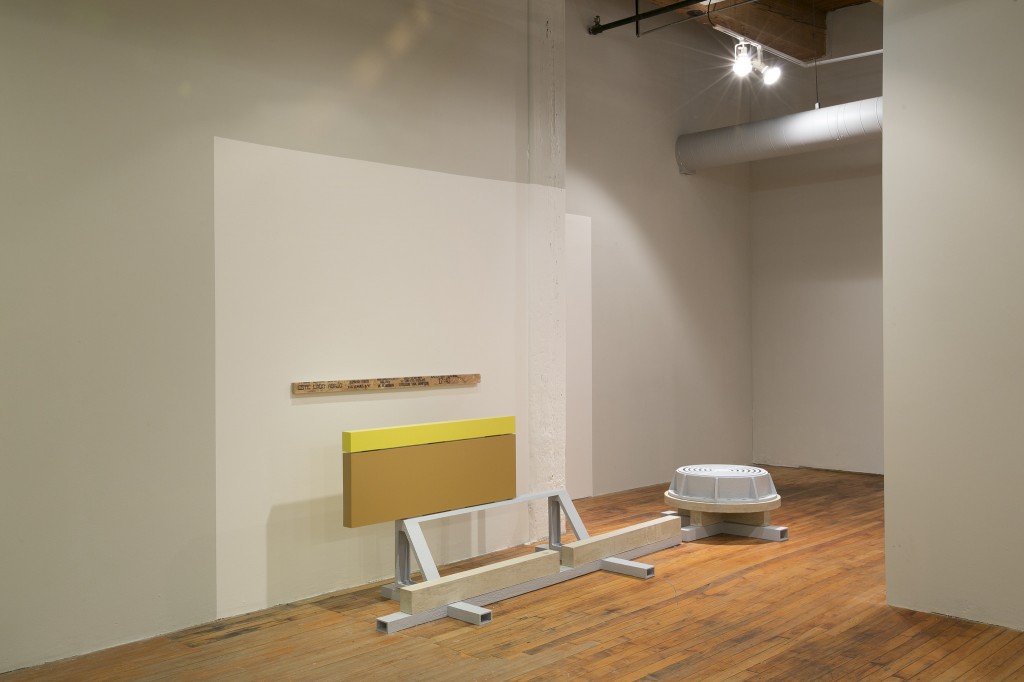 At Threewalls, Stephen Reber and Anders Ruhwald take turns in their sculptural installation with direct quotations from the everyday and more open-ended abstractions. Culverts, drainpipes, lamps, chairs, cinderblocks and a miniature model of a swimming pool conjure a multi-use complex that intermixes the residential and industrial. Utilitarian aesthetics rendered in impractical materials make the two men’s joint efforts into a theater of design experiments. Reber’s sprawling tableaus are models of symbiotic, interdependent systems. His “Dredge” is a life-sized level of Super Mario in which a cantilevered wall with a yellow speed stripe ends at a simulated manhole cover. Ruhwald’s collection of ceramic sculptures are hulking feats with lumpy black-and-white surfaces that get more interesting the further away from their references they get. A ceramic chair hanging high on the wall and “Lamp” are labored reproductions with little epiphany for all the effort. It’s his more simplified forms that isolate and emphasize the intense tactility of their production and succeed as thoughts about world-building and how constructions are often taken for granted as naturalized. The handmade physicality of his torso-sized flattened cylinder “Plain” doesn’t easily represent anything in particular, freeing it to dialogue with the architecture on which it hangs. 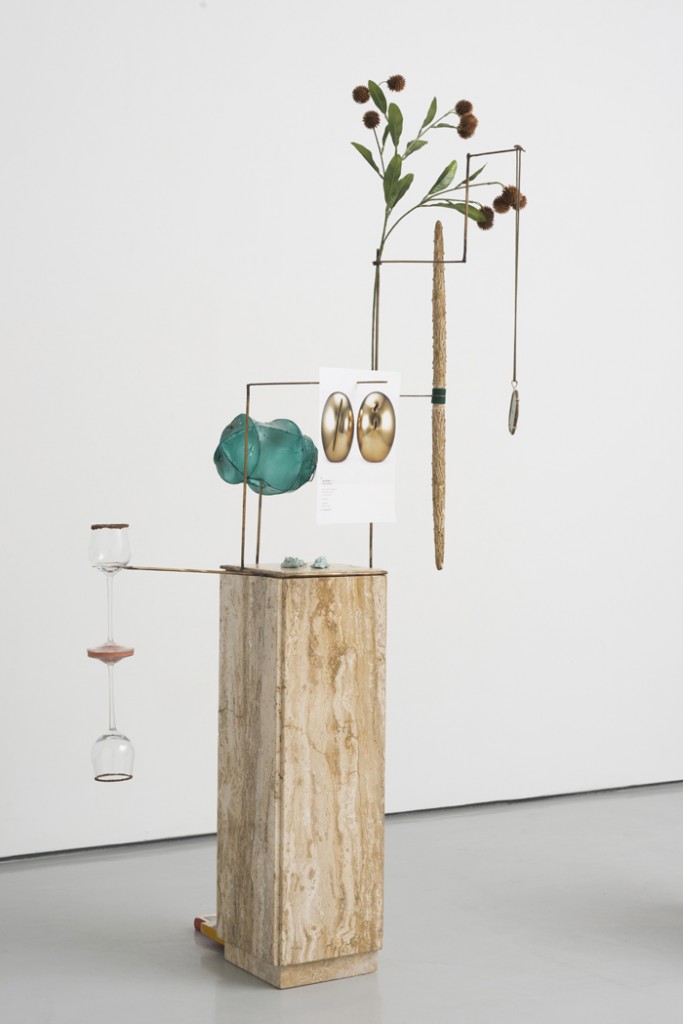 With reflexive cognizance about the commercial gallery system in which they participate, the artists gathered in Monique Meloche Gallery’s exhibition “My Hands Are My Bite” (as well as Dan Gunn, the artist who curated it) admirably succeed at crafting maneuvers that are Marxist and materialist at the bone without dispensing with—and in fact indulging in—decoration and ornament. Together they’ve built a surreal luxury gift shop, which indeed the gallery was to begin with, only now the works take as their topics the uneasy glamor of how the discursive and the profitable are intertwined. Diane Simpson’s two “Window Dressing” installations are stylized affairs that meld fashion and architecture in sculptural Art Deco pastiches. Not simply addressing Meloche’s front wall as a slender gallery like many artists invited to show on it, Simpson abstracts the fundamental forms of window displays—the dressed mannequin and the backdrop—into sassy paeans to consumer culture done up in full regalia. Lilli Carré joins Simpson’s blithe nod to postmodern (and yet now historicized) aesthetics like those of the Memphis Design group in her twelve-frame animation loop wherein abstract geometric shapes swoop across the flickering sepia screen. Laura Davis’ “Neckslices” are a take-no-prisoners take on the boutique: monochrome discs with sloppy color treatments trimmed in various salvaged necklaces. And her two “Cups and Balls” assemblages are dazzlingly complicated collections of ideas attendant to the salvaged found objects she combines. The passing resemblance of these Dada displays of jewelry and tchotchke to artist superstars like Carol Bove is taken as an intentional jab at art market trends, driven home by the page of an auction catalogue brazenly hanging from one of the sculpture’s metal stems. Davis’ catchall creative ecosystems come to include the ordinary, the thrifted, the DIY, the rarified, the decorative and darker psychological trappings. Incommensurate with the show’s tacit claims, Carol Jackson’s tree-root-canals are mash-ups (in this case, Americana sheet music and webcam stills of forest fires) too mushy with art materials to have enough conceptual traction. They belong elsewhere, away from this summer’s scaffold-wrapped city in mid-transition and the redeveloped thoughts on place that it warrants.