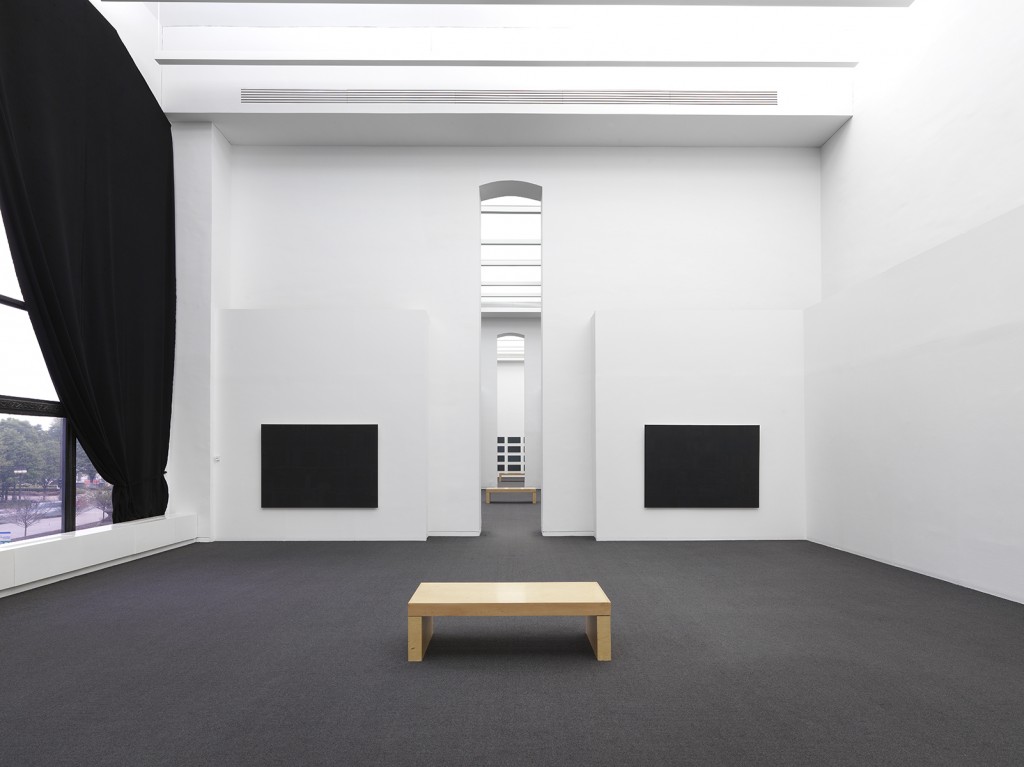 A vexatious cloud hangs low over Matthew Girson’s new exhibition “The Painter’s Other Library.” Depicting endless shelves of meticulously placed books, the artist’s many compositions are executed in a brooding, almost impenetrable palette. At first blush, they read simply as black. As the eyes adjust to the paintings’ hushed tones, book after book, arranged to echo the precision and symmetry of modernist geometric abstraction, slowly emerge from the oleaginous mire. The beguiling tension within these works is heightened by the stark white walls and cathedral-like atmosphere of the Chicago Cultural Center. 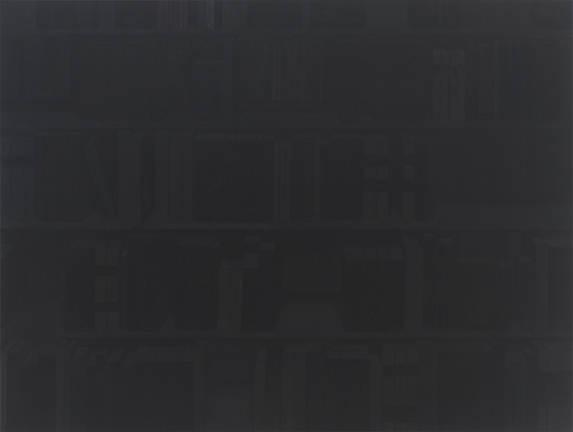 Though the book and its citadel the library have long been regarded as open reservoirs of human wisdom, Girson has created an athenaeum of inaccessibility. We are prevented from knowing his books’ contents because they are literally and metaphorically dark, imbued perhaps with knowledge that is false or dangerous, true or innocuous. It’s impossible to tell. The large-scale “Fiction” and its somber twin “Non-Fiction” are both softly brushed in a near-classical manner, and their murky shelves appear to contain the same books. Given facts’ power to liberate man from psychic and material bondage, and the disastrous recent conflicts falsehoods have led us into, the paintings’ formal equivocation between fantasy and reality is troubling.

There’s a similar hesitation toward knowledge present in the flickering light of Girson’s single channel video “Allegory, Allegory, Part 2.” Featuring a scene of raging fire plucked and looped from the Nazi propaganda epic “Triumph of the Will,” the image is rife with contradiction. Ever since Prometheus’ theft on man’s behalf, fire and its light have been synonymous with knowledge, and yet in the hands of dictators fire means wisdom’s death. However, “Allegory, Allegory, Part 2” like “Fiction” and “Non-Fiction” seems strangely ambivalent, as if to suggest that knowledge and ignorance lead to the same destination. “The Painter’s Other Library” has been one of the most provocative shows I’ve seen this year and also one of the most unsettling. (Alan Pocaro)

Through August 10 at the Chicago Cultural Center, 78 East Washington.