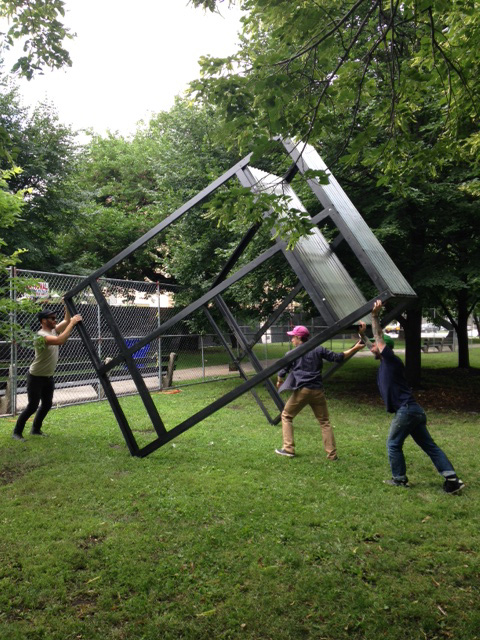 The West Town gallery Johalla Projects returns to the Pitchfork Music Festival, held in Union Park, this weekend to present “Geometric Village,” an installation by Heather Gabel and Chad Kouri. Two A-frame architectural structures fifteen feet tall and nine feet wide are joined by an additional set of smaller chairs or stools scattered around these forms. The two triangular structures will house smaller works by the two artists that will be available for sale. Gabel will have packs of postcards available for $15 and Kouri will exhibit a set of prints he created with Tan & Loose Press which are available for $15 each. This installation will be accessible to festival attendees; tickets are currently $60 a day, or $110-$130 for a three-day pass.

This is Johalla’s second time collaborating with Pitchfork. In 2012, they worked with artist Andrea Jablonski to make a colorful balloon installation for the festival’s VIP area while Matthew Hoffman presented a huge text sculpture that spelled out “THESE MOMENTS.” Johalla director Anna Cerniglia described by email how they came to work with their artists. “Even though—at this point—Johalla doesn’t directly represent artists, we do have very close relationships with a number of the artists we work with on a consistent basis both in and out of the gallery space. Heather and Chad are both perfect examples of this. We know their work and their (vastly disparate) aesthetics very well. So, they were selected because of these styles and because of our belief that their ideas can be translated into a more public platform.”

For this second foray into Pitchfork, Johalla has partnered with the Thompson Chicago hotel, which has contributed to the production costs for the works. While the budget for the project wasn’t made available, Cerniglia explained how the artists were given a stipend at the outset for their participation, and will also receive the remainder of the funding after the logistical costs have been covered. The structures were fabricated by Threefold, a local design and fabrication studio.

Since its inception in 2009, Johalla has had an eye toward public art and collaborating with major events. Says Cerniglia in a follow up phone call, “Popping up these installations in weird locations is really fun and important for the art world. Art should be for everybody. I just really like the idea of somebody who didn’t expect to see something comes across art without the intention of seeing it.” Along with their previous projects at Pitchfork, last year they worked with artists to create a series of murals for Lollapalooza, and in February, Johalla collaborated with the Blue Moon Brewing Company to make an interactive public art installation in conjunction with the launch of the brewery’s Twitter handle. They also curate an ongoing exhibition series of public works in the Damen stop of the Blue Line’s station. In June, they produced a large installation for Soho House Chicago’s “Satellite Nights” event. (Matt Morris)