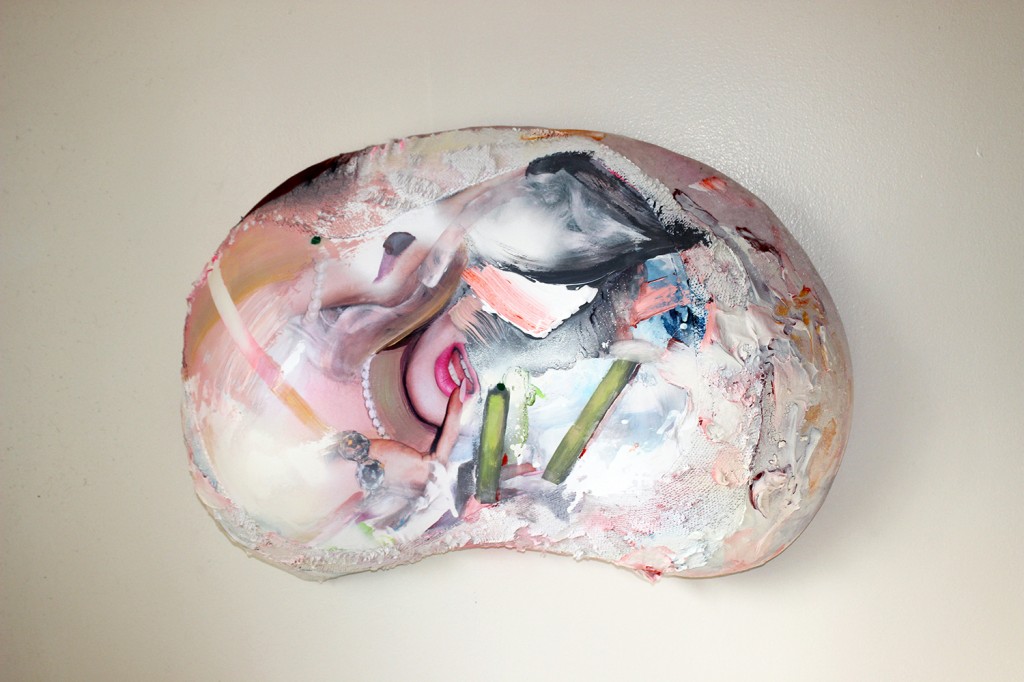 “I was very little when I went as Glinda for Halloween one year, with very patient parents,” recounts artist Vincent Tiley as we met for coffee in Bushwick, the neighborhood in Brooklyn where he resides. Costumed as the good witch of Oz was one of Tiley’s earliest forays into the effervescent world of drag. “I take a lot from my experience coming out in college in Baltimore surrounded by a queer punk scene, making looks and going to a club and feeling all the feels that you get being weird at a place where people want you to be sexy.” For Tiley, bodies contain these tensions between the desire to be desired and a nearly contradictory one to challenge and affront. His first solo exhibition, “New Skin” at elee.mosynary gallery in Pilsen, is populated with heavily adorned bulbous paintings on digitally printed spandex that are “Blob Portraits” of club kids and drag queens that Tiley has befriended.

The sculptural paintings are stuffed with shaped foam; “They are literally like drag queen pads,” says Tiley. Scrubby washes of paint are layered with glittery nail polishes, hair extensions in brightly artificial hues and spiked pleather straps. He cites the underground social scene of yesteryear’s gay and queer subcultures as inspirations, such as Warhol’s Factory and “the artists who have always worked on the fringe between a canonized art world and nightlife, like Leigh Bowery for instance.”

Before going to grad school in the Art and Technology department at SAIC, Tiley was a studio assistant for Terence Koh, the art-world enfant terrible who has collaborated on all-white fashion designs with Lady Gaga and Converse sneakers. Other art-fashion crossovers of the moment, like Sterling Ruby’s collaborations with Raf Simons and Dior, are called to mind by Tiley’s paintings.

“Part of the subtext about blobs and lumps is that some are the sexualized parts of the body, while others are repulsive,” he says gesturing quotes around the last word with his fingers to signal skepticism. His painting “Pearl” is a confection that takes a photograph by Tiley’s friend Jake Ludwig of drag icon Pearl as its foundation and encrusts it in jizzy, cosmetic paint, sequins and stained velvet. 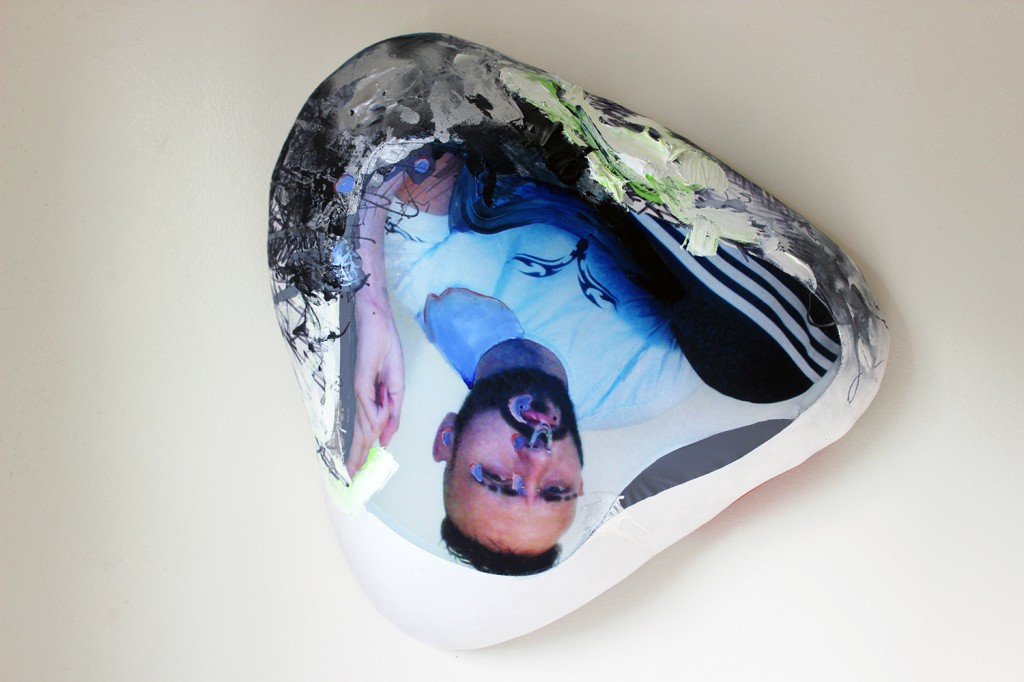 Beside this rococo-Rauschenberg are three works in homage to Parisian club kid Lenny Cartwright, who permitted Tiley to use images of his edgy looks. “I farmed his Facebook for selfies and turned them into these Otaku body pillow paintings,” he explains, referring to the dakimakura, pillows in Japan adorned with fan boys’ obsessive (and often sexualized) interests in cartoon characters and pop stars.

Along with the series of blob paintings, Tiley presents a new video and two performances that will be reprised for the exhibition’s closing. In the video, flowers are scattered and arranged across a nude male figure, while the performances feature lengthy, slow moving choreography and elaborate body suits. For Tiley, the painted suits represent the philosophical crux of this work as “illustrations of how new bodies are produced every day through an act of touch or wanting to be looked at.” (Matt Morris)

Tiley shows at elee.mosynary gallery with a closing from 8pm-11pm on Friday, August 1, 645 West 18th.