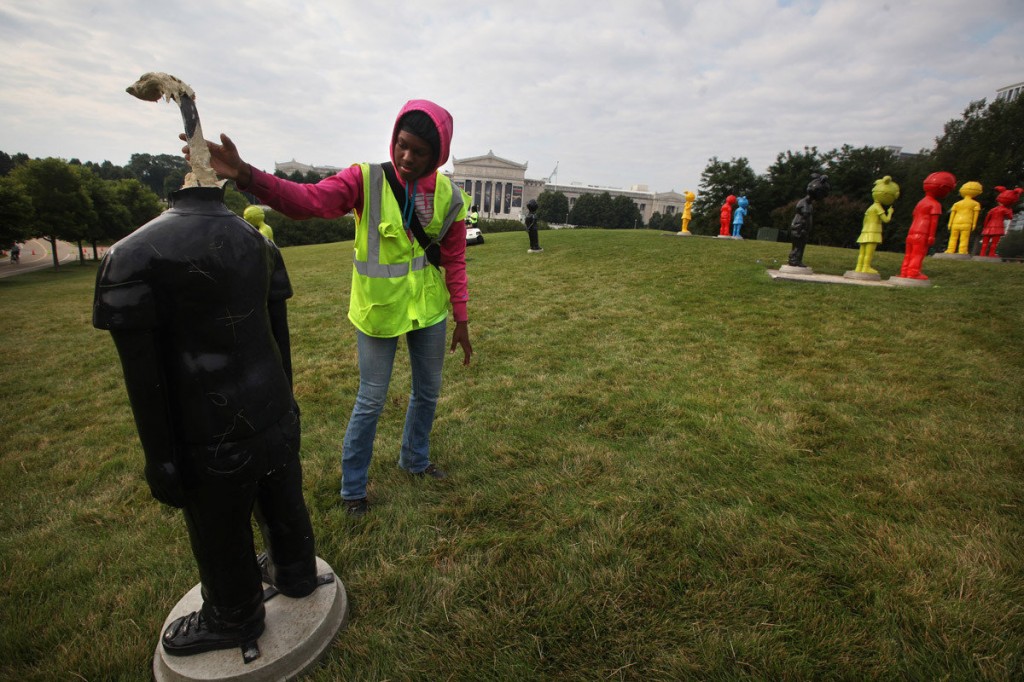 Clean-up after vandalism of Hebru Brantley’s “The Watch”

Last Sunday morning a series of sculptures installed along a sloping lawn near the Field Museum by Pilsen-based artist Hebru Brantley were found vandalized. The artwork titled “The Watch” is a multi-figure homage to the Tuskegee Airmen and features a series of young, black, superheroic characters that Brantley uses in his work. Last weekend, the Chicago Tribune reported that several of the figures had been knocked over, with one beheaded and several others sustaining multiple punctures and elements broken off. In an email, Chicago Park District’s director of communications Jessica Maxey-Faulkner said that the sculptures have been removed to be repaired by the artist. While no definite timeline for the repairs has been determined, the artworks will be returned to the park once they have been repaired.

“The Watch” was previously installed last fall at Pioneer Court on Michigan Avenue as Brantley’s contribution to Chicago Ideas Week, and was moved to its current site in May. Many of the characters recur in Brantley’s current exhibition “Parade Day Rain” currently on view at the Chicago Cultural Center through September 23. Brantley’s paintings and sculptures employ his cast of Fly Boys and Fly Girls to imaginatively explore the life experiences of youth of color in urban environments, drawing from black history, comics, and pop art to deal with cultural representations of race, class and privilege. (Matt Morris)